Fallout from a Republican-Controlled Congress?

From Interest Rates to Infrastructure, Impact on the Building Trades Remains to be Seen 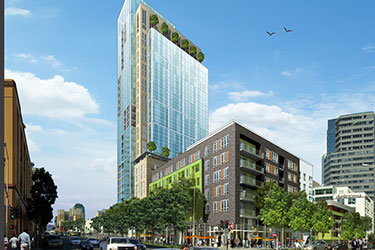 Construction of a new 32-story residential tower at 299 Fremont is being funded from the Multi-Employer Property Trust (MEPT), a real estate equity fund representing 343 pension plans. MEPT is 100 percent self-financed, so the fund is not beholden to borrowing or seeking construction financing from lenders. - Photo courtesy of MEPT

With Republicans gaining eight seats in the United States Senate and now holding majorities in both houses of Congress, there is speculation about how the party’s economic policies will impact development, construction and housing. The Republican Congress’s economic agenda focuses on reducing corporate tax rates, passing a balanced budget amendment to rein in deficit spending, curbing regulations and raising interest rates through the Federal Reserve.

Organized Labor spoke to a local developer, an investment fund representative, and a housing activist for their perspectives on how shifts in politics might impact interest rates, housing development and infrastructure projects.

In November, the San Francisco Business Times reported that UC Berkeley business professor Kenneth Rosen believes that Congress will pressure the Federal Reserve to raise interest rates. Rosen told an audience at an event hosted by the commercial real estate firm Cushman & Wakefield that while the Federal Reserve and Fed chair Janet Yellen are independent, they are subject to hearings in Congress, and that there will be pressure to normalize today’s historically low interest rates. The rates set by the Federal Reserve impact other interest rates for private and public lenders. The resulting increase in the cost of borrowing would drive up construction financing costs for developers, impacting construction and housing costs.

Dan Kingsley of SKS Investments said he feels that since the Fed is independent of political pressure from Congress and the White House, he doesn’t see a dramatic rise in interest rates any time soon.

“I don’t believe for a minute that Janet Yellen would do anything with monetary policy other than what is correct for the country,” Kingsley said. “The Republican Congress can try to pressure the Fed, but the Fed has successfully resisted political pressure in the past.”

Kingsley believes that interest rates will rise, but the increase will be modest.

“Developers can absorb the increase as long as it is modest and predictable,” he said. “The economy will be able to absorb interest rate increases and not slow down.”

Rosen pointed out in his talk that for the past five years the interest rate has remained at zero.

“They’re going to start moving, probably in the middle of next year,” he predicted. The yields on Treasury bills and bonds will likely increase as well, and could affect funding for public works projects.

Kingsley said that while an interest rate hike could impact construction in San Francisco, other factors should prevent any setback.

“The construction we are seeing here is driven by companies with robust growth and expanding workforces that need office space,” Kingsley said. “They can afford to absorb the higher costs that might result from the higher cost of financing projects.

SKS is the developer of office projects at 888 Brannan and 270 Brannan streets in San Francisco.

“The Fed is concerned with economic recovery for consumers; the business community has recovered, at least on the West Coast and East Coast,” Kingsley added.

“Our transit infrastructure is close to collapse and needs to be upgraded.”

Mike Ibarra, Senior Vice President for Industrial Relations on the West Coast for Landon Butler, which manages the Multi-Employer Pension Trust (MEPT) fund, said since MEPT is 100 percent self-financed, the fund is not beholden to borrowing or seeking construction financing from lenders. He pointed out that some developers borrow while rates are low to mitigate risk and not have to put up as much of their own capital.

“We do partner with banks and other funders, but we don’t rely on leveraging funding via loans so we can be flexible and not have a problem when interest rates change,” Ibarra said.

The MEPT funded the NEMA project at 10th and Market Street and the residential tower under construction at 299 Fremont St., and will start construction next year on an industrial park in Livermore. The MEPT has invested $600 million in Bay Area projects and requires all-union labor. Other developers like the AFL-CIO Housing Investment Trust and ULLICO’s J for Jobs program that require all-union labor do rely on bond funding and construction financing, and could be affected if interest rates and bond prices increase.

Ibarra said he doesn’t think changes in Congress will make a difference in interest rates.

“We’ve had low interest rates under Democratic and Republican majorities, so that is irrelevant,” he said, before adding that the bigger issue is the growth of the economy and how the Fed addresses policy for inflation. “There is a possibility that rates could rise and slow growth, but the Fed hasn’t seen a need to rein in inflation by raising interest rates.”

Tim Colen, Executive Director of the San Francisco Housing Action Coalition, characterized the Senate Republicans who now comprise a majority as “not urbanists.”

“They don’t represent cities,” Colen said. “They largely represent rural areas and don’t see or don’t care about the needs of cities.”

“The priority for the Republicans is cutting deficits,” Colen said. He agreed that since interest rates have been kept at historically low rates for a long time, it is not likely they will stay low, but is disappointed at the lack of impact low rates have had on affordable housing developments. “It’s odd that during these times when you could borrow money basically for free, that it’s not being used to fund affordable housing. Housing construction is interest-rate sensitive.”

While housing construction could be stalled by higher borrowing costs, affordable housing construction is already underfunded at the federal and state levels. The trend is likely to continue as Congress moves to cut funding for programs that might help middle class and working class families in favor of tax cuts for the wealthy.

“Affordable housing is funded through a whole set of tools, from developer fees to state and federal subsidies and tax credits,” Colen said. “Federal tax credits have steadily declined, and programs like HOPE 6 and FHA are petering out.”

While political changes at the national level impact construction and development, the state could also do more to help build housing.

The Republican majority in Congress could also hurt efforts to fund infrastructure improvements for roadways, bridges, rail lines, and water and sewer lines that need upgrades, repairs and maintenance.

Current Senate Budget Committee Chair Patty Murray of Washington wrote on the committee’s website in April that, “Instead of investing in the nation’s infrastructure, the Republican budget … would slash critical investments for roads, bridges, and rail, and it would further contribute to the infrastructure deficit.” Murray noted that cutting investments in transportation programs “would have serious implications for infrastructure projects to build and repair bridges and ease congestion on highways and roads. It would also cost jobs. An estimated 186,000 heavy construction and related jobs would be lost next year under the Republican budget.”

On Nov. 5, Sean McGarvey, President of North America’s Building Trades Unions, called on members of Congress to put aside “petty and counterproductive political partisanship” and “work with the Administration on crafting an effective and robust plan to invest in the re-building of America’s crumbling infrastructure.”

There has been some recent movement in Congress towards a bipartisan agreement on infrastructure funding, but Republicans have resisted even small programs like Obama’s American Recovery and Reinvestment Act (ARRA) of 2009 that funded hundreds of projects around the U.S. and created tens of thousands of jobs.

Republican control of the Senate will also mean that Sen. Barbara Boxer will lose her leadership role as Chairman of the Environment and Public Works Committee. Boxer has been a stalwart supporter of labor and a major force in securing ARRA funds for projects in the state, including construction of the Transbay Transit Center.

President Obama and new Senate majority leader Mitch McConnell of Kentucky recently met to discuss prospects for cooperation between Democrats and Republicans. McConnell is no friend of unions, having introduced an amendment to the Employment Non-Discrimination Act that would have established a national “right to work” law that would undermine collective bargaining rights and lead to lower wages and less workplace protections. An AFL-CIO’s online blog post titled “11 Reasons Why Mitch McConnell is One of the Worst Candidates for Working Families in the 2014 Elections” cites his opposition to prevailing wage laws and extending unemployment insurance benefits, as well as supporting tax breaks for the wealthy.

As Republican minority leader, McConnell pushed for the ARRA to provide more tax cuts to corporations rather than fund infrastructure improvements, and fought against funding road and bridge repairs, even as 34 percent of the bridges in his home state were declared structurally deficient or obsolete in 2010.

MEPT’s Ibarra noted that a recent 60 Minutes program about the nation’s infrastructure featured the head of the U.S. Chamber of Commerce Thomas J. Donahue and AFL-CIO president Richard Trumka agreeing on the need for infrastructure investment to stimulate economy and create jobs. “Congress should get out of their own way and not waste a lot of time on infighting and find ways to stimulate the economy,” Ibarra said. He said Congress should spend time on and think about ways to improve the economy, and take a lead on infrastructure spending.

Colen warned that improvements were needed in Bay Area infrastructure.

“Our transit infrastructure is close to collapse and needs to be upgraded,” he said.

Whether there will be bipartisan agreements on infrastructure funding, tax cuts, energy policy, health care or immigration remains to be seen. Still, it may be difficult for the new Republican majority to pass its bills as 60 votes are needed in the Senate to move legislation to a vote, and the Republican majority is 54 to 44 (with two Independents). Attempts to roll back prevailing wage laws or undermine workers’ rights could be stopped by filibuster or through a presidential veto. And while Congress controls the federal budget and Republicans are philosophically opposed to spending or enforcing labor laws and could cut funds to the Department of Labor, the Occupational Safety and Health Agency, and public works projects, their reign may be short lived. In 2016, Republicans will have to defend more incumbent senators than the Democrats did this year, including some who were elected in 2010 in states that are now trending back to the Democrats.