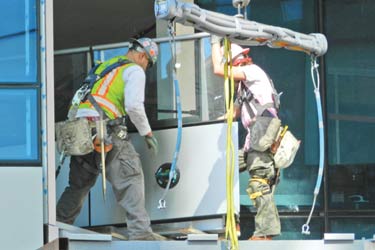 The $620 million Lumina development will feature a wide array of amenities, with a landscaped rooftop terrace, a state-of-the-art fitness center, and spa facilities. - Photo by Paul Burton

Two new towers with distinctive curved glass and metal exteriors are rising in the San Francisco skyline at 201 Folsom St. The 656-unit condominium development known as Lumina is being built all-union by general contractor Lend Lease for developer Tishman Speyer. Lumina is near the Infinity towers at Folsom and Spear streets, which were built by general contractor Webcor for Tishman Speyer between 2005 and 2009.

The project was initially approved for construction in 2003, and slated to be built at the same time as the Infinity towers, but stalled during the financial crisis that set back construction around the Bay Area and the U.S. after 2007. The project was revised and redesigned by Bernardo Fort-Brescia of Arquitectonica in 2009. Tishman Speyer announced in February 2013 that it had formed a joint venture with the Chinese residential real estate developer China Vanke to fund the $620 million development. The project broke ground in June 2013, after a ceremonial groundbreaking event attended by officials from China Vanke, Tishman Speyer, and San Francisco mayor Ed Lee. “This partnership represents a solid foundation for confidence in our city,” said Mayor Lee at the time, pointing out that international investors showing confidence in San Francisco projects was significant after the recession.

Towers in the Lumina project

Number of stories of the two towers

The two new towers that define the project are now about halfway to their full height.

The 42-story, 400-foot-tall tower and a 350-foot, 37-story tower, will be connected by two mid-rise eight story buildings. The buildings will have a mix of one-, two- and three-bedroom condos.

Over 100 union construction workers are currently working at 201 Folsom, with crews of glaziers and ironworkers from Permasteelisa, an international company with offices in Corona, Livermore-based Architectural Glass and Aluminum installing the exterior panels, and ironworkers from CE Toland and Son doing some of the metal work. Other union subcontractors include Allied Fire Protection (sprinkler fitters), Acco for the HVAC work, and Otis Elevator.

San Francisco based EMCOR Marelich Mechanical is doing much of the mechanical and electrical construction. Crews from EMCOR wore pink hardhats and T-shirts on Oct. 2 for breast cancer awareness, and joined employees from Tishman Speyer and Lend Lease to form a 350-person giant human pink ribbon in a “Call to Action” in support of breast cancer awareness. “Tishman Speyer is honored to have Lumina host the formation of the Pink Hard Hat Ribbon on its rooftop terrace,” said Carl Shannon, Tishman Speyer’s Senior Managing Director and Regional Director for Northern California. “We welcome the opportunity to collaborate with our building partners to bring awareness to breast cancer within our community.” The pink attire sparked interest and awareness among neighborhood pedestrians who watched the pink-clad construction crews work alongside others wearing the more traditional bright orange and flourescent green shirts and brown overalls.

Lumina will feature a wide array of amenities, with a landscaped rooftop terrace, a state-of-the-art fitness center, and spa facilities. The project is seeking to meet LEED Silver Certification. Tishman Speyer began selling units in October in the mid-rise building and one of the towers. Construction is on schedule to be completed by 2016. The developer is not including affordable units on site, but is funding construction of 190 affordable homes in the South of Market.