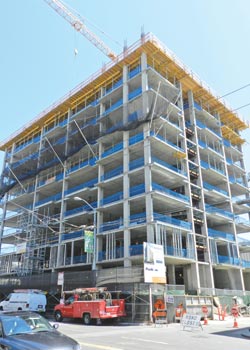 The Panoramic is expected to be completed in June and will include an 8,000 square foot social space with modern furnishings, a fireplace, a lounge area and a roof deck. - Photo by Paul Burton

Construction crews recently celebrated the topping off of a new 11-story apartment building rising at 1321 Mission.

When completed, the 108,000 square foot apartment complex, “The Panoramic,” will feature 160 very small apartments: 120 “micro-studios” with between 274 and 295 square feet of living space, and another 40 “micro-suites” on the corners of each floor with two bedrooms and between 605 and 630 square feet. The studio apartments are pre-fabricated and configured with two twin beds or a queen-sized Murphy bed that converts to a table.

The Panoramic is the latest in a trend to deal with housing affordability by building small, micro units. Developer Patrick Kennedy, based in Berkeley, has pioneered what he calls the “smart space” concept, with several projects built or getting underway around the Bay Area.

In November 2012, the San Francisco Board of Supervisors passed legislation sponsored by Supervisor Scott Wiener that changed the building code to lower the minimum size for apartments to as little as 220 square feet.

“We have a housing affordability crisis here; rents are through the roof,” Wiener noted in a statement at the time, citing the average rent for a studio apartment in the city rising to more than $2,100 a month. “To confront San Francisco’s rising housing affordability crisis, we must be creative and flexible. Allowing the construction of these units is one tool to alleviate the pressure that is making vacancies scarce and driving rental prices out of the reach of many who wish to live here.”

The legislation capped the number of micro-units at 375, and mandated that the San Francisco Planning Commission study the impact of the construction once 325 are built.

In a feature story on LifeEdited.com, which promotes micro apartment developments, Patrick Kennedy said the micro-suites will be less expensive than the studio apartments. “Many people coming out of college can’t afford the micro-apartments and in fact they’re not interested in living alone,” Kennedy said. “The micro-suites are an attempt to provide entry level housing in a great location for people not making $100k year.”

The first five floors with 80 apartments have been leased by the California College of the Arts for student housing. Units on other floors will be available on the open market with prices estimated in the $1,600 per month range. Kennedy said he sees micro-apartments as “a very important part of cities for Millennials, singles and older people looking for well-designed, central housing they can afford.”

The building is designed by architects Kwan Henmi, and features 9-foot ceilings, built-in storage in each unit, and city views. Located one block from Twitter’s headquarters on Market Street, the building will also have 240 bicycle storage spaces. It will have no parking spaces for private cars, but one City CarShare vehicle on-site. The ground floor will have 3,359 square feet of commercial space.

Sustainable materials and construction methods are being used, including installation of high-efficiency lighting and low-flow plumbing fixtures. Other amenities include an 8,000 square foot social space with modern furnishings, a fireplace, lounge area and a roof deck.

Construction began in February, after demolition of a small furniture store at the corner of 9th and Mission, and is on schedule for completion in June 2015.

Union contractor Pankow is the general contractor, with a crew of carpenters and laborers on the project. Ironworkers with Romak Iron Works are handling the structural steel work, with Operating Engineers from Sheedy Dryage Company.