Mazzola Reappointed to SFO Board 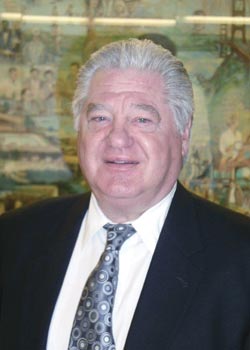 Mayor Lee’s communications director, Christine Falvey, noted that Mazzola “has served the commission for years, and the mayor recognizes his contributions that have helped make the airport an international model.”

Indeed, SFO has seen huge growth in recent years, including an increase in the number of airlines operating out of the airport, an increase in flights and travelers, the recent opening of a new international terminal, and a new control tower under construction.

Some of the success at SFO can be attributed to the labor peace resulting from the project labor agreements for construction projects and card-check neutrality agreements for union organizing. As an airport commissioner, Mazzola worked to enact the PLA and card-check rules, and helped pass SFO’s Quality Standards Program (QSP) that sets minimum compensation levels for workers at SFO and has been credited with reducing worker turnover.

“Larry Mazzola has been an anchor for working men and women in San Francisco and San Mateo County for a long time,” San Francisco Labor Council Executive Director Tim Paulson said. “As president of the Airport Commission, he has been invaluable. He was there to help guide the airport’s expansion to make it a world-class airport, and to make sure that the workers who want a voice on the job can join a union.”

SFO has the largest workforce – either directly or through various airlines and contractors – in San Mateo County.

“Standards set under Larry’s leadership highlight the benefits of having a well-trained and retained workforce that helps protect the airport and the flying public,” said San Mateo County Central Labor Council Executive Secretary-Treasurer Shelley Kessler. “Having Larry Mazzola’s leadership has made a big difference for workers in our region.”

Paulson added that Mazzola has a good relationship with city government and airport staff.

“His expertise is needed,” Paulson said. “I personally want to thank Mayor Ed Lee for re-appointing him.” Paulson noted that, while it is sometimes difficult to reach a consensus among the unions of the San Francisco Labor Council, support for Larry Mazzola’s re-appointment to the Airport Commission was unanimous.

The retired Plumbers Local 38 business manager was first appointed to the five-member commission that sets SFO policies in 1994 by then-Mayor Frank Jordan. Mazzola was re-appointed by mayors Willie Brown and Gavin Newsom in subsequent years.

Kessler noted that SFO has become a model nationwide and officials with other airports, including ones in Seattle and New York, have contacted SFO to see how they can improve labor relations as SFO has done.

“Larry can explain concepts that are important to the labor community in a way that helps other commission members understand why having unions and good labor relations is a benefit,” Kessler said. “They see the benefit for the airport as a whole of paying decent wages and preventing turnover and how that helps augment the safety and security of the airport and the flying public. Larry has been able to facilitate conversations that lead to positive policies instead of conflict and to help stabilize the airport.”

Mazzola said during his next term, SFO will choose an operator for a new hotel that will be built under the PLA, with 100 percent union labor. “There is always a lot of construction at airports,” Mazzola said. “We will remodel the United Terminal One, and will keep it 100 percent union” like the T2 expansion done in 2011 and the T3 terminal expansions completed earlier this year.

Several union leaders from the San Mateo and San Francisco labor councils met with Mayor Lee in August to urge him to re-appoint Mazzola. Mazzola said he wants to thank everyone who supported his reappointment, including unions and many others.