Building Trades Mobilize Big Push to Get Out the Vote 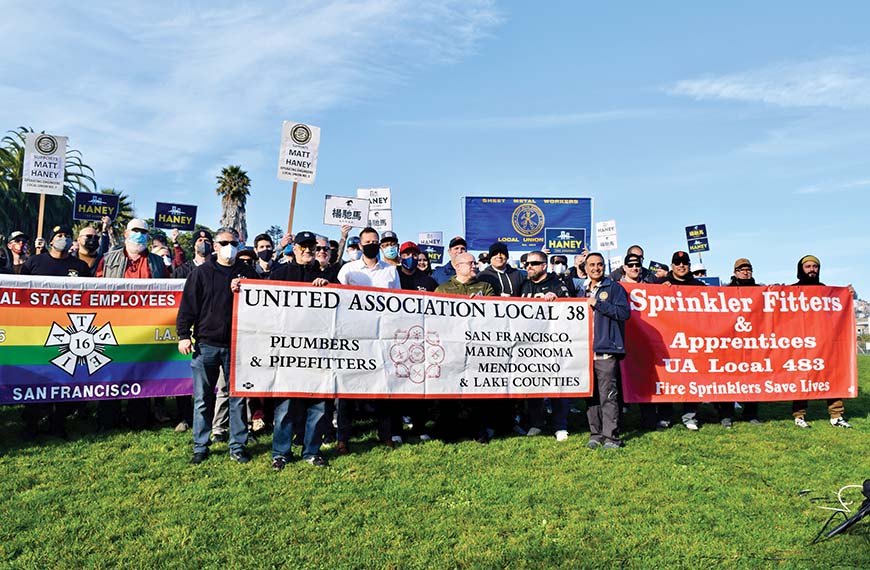 San Francisco’s political battles tend to be fierce, and Matt Haney’s run has been no exception. Haney, who currently serves as the City’s District 6 Supervisor, has his sights set on the District 17 seat representing the City’s eastern side in the California State Assembly. Based on returns from the February 15 citywide special election, he’s on his way to a runoff election against rival David Campos in April.

Haney’s success thus far is thanks in part to his support from the SF Building Trades. Early on the morning of Saturday, January 29, scores of Building Trades union members congregated at Mission Dolores Park to rally behind Haney’s bid for the Assembly seat, recently vacated by current City Attorney David Chiu.

Following the rally, workers and other Haney supporters hit the streets, door-knocking and passing out literature to help boost voter turnout and secure a win. We spoke with them about why they threw their support behind Haney.

“We need Matt in the state assembly,” said Assemblymember Ash Kalra, who spoke at the rally and serves as chair of the Labor and Employment Committee. “I need him there to help push and fight back against the constant attack on workers that happens in Sacramento, to push back and make sure the governor is on the right side of issues like paid sick leave, right of return, making sure when there are investments being made and subsidies being made that […] it’s creating good union jobs.

“With Matt, I know I’ll have a partner in doing that.”

Haney was up against former supervisor David Campos and other contenders for the Assembly seat in the special election and will face Campos again in the April runoff. The stakes are high. With an estimated 1,500 Building Trades members sitting on the out-of-work bench right now, workers can’t afford political representation that kills bills that would help streamline housing creation or squash good union projects like the recently halted 495-unit housing proposal at 469 Stevenson Street.

Haney has established a particularly favorable track record fighting for unions and working people while on the Board of Supervisors representing District 6, where there’s about $5 billion worth of construction projects currently underway. As former president of the San Francisco Board of Education, he spearheaded an expanded project labor agreement covering school district construction.

With the lion’s share of the city’s development pipeline in District 6, Haney has focused on ensuring that those projects are built by union hands. He’s also been lauded for his current push for legislation to curb rampant construction industry wage theft.

At the rally, Haney spoke about the need to build over 80,000 units of housing in San Francisco over the next eight years and over a million units statewide. He said that the Building Trades are essential to meeting those goals so that working- and middle-class families can have housing security.

“The solution to the issues that are happening in our neighborhoods that are struggling and left behind can be found right here — the people who can build housing and get livable-wage jobs so that people can survive,” Haney said. “That is what we’re fighting for. We have a lot of work to do.”

There’s nothing that makes me prouder than seeing a bunch of Building Trades members rally behind an actual candidate who cares about workers — because there are candidates out there who pretend they care about workers, and then there are candidates who really do and deliver. And Matt Haney has been one of those who has delivered for workers time and time again throughout his leadership in San Francisco, whether on the school board or a supervisor, and he’s going to do the same for us in Sacramento.

This is a big race. David Chiu was a champion for organized labor and the operating engineers, and he leaves some pretty big shoes to fill. Matt Haney with the Board of Supervisors has always been a friend of labor and the building trades and Local 3. We think it’s critical that we get him elected to the seat. We have a lot of infrastructure coming over the next 20 years in this district, and it’s paramount that we protect that work. We think Haney is our guy.

A lot of politicians say they’re for working families. They talk the talk, but Matt’s a proven champion for working men and women.

Matt Haney has the best interests in mind for the Building Trades, and I think he’ll do the best job for San Francisco out of Sacramento.

Labor is the heart of San Francisco. Matt Haney is a big plus going forward for the operating engineers as well as all labor in San Francisco, He’s a great guy and he’s for all of us working people.

It’s important for every working person in America to know that they’re being protected by their employers and by the rules that govern their work environment. Matt Haney stands for that, and that’s why we came out here to support him to make sure everybody has a voice, and not just union members. We believe he’s the best candidate who can do that.

Since I was a kid, I’ve always followed the trend of my parents when they voted, and I’ve never missed any elections. I’ve had many encounters with politicians over the years, and I like to be involved because voices count. I’ve been a builder since 1979, and there are good things that happen when you get good people in leadership. When you get someone like Matt Haney in office, good things happen. That’s what today is about. I could be somewhere else, but this is an important issue where this brother needs our support.

I was a member of the executive board for Local 300 for 25 years, so I thought I should come out to support. This type of volunteerism is extremely important for union members to help their community and their children by staying informed and getting involved. It means a lot for people to know what’s happening politically.

Haney is pro-union, and labor built this county. So, if he’s pro-union, I’m all for him. I’m here to support him, and hopefully he wins. He’s pro-us, so I’m pro-him.

I’m out here supporting Matt Haney to help out all the trades, to make sure we all get a fair shake and are able to continue working and get more jobs. All the trades are in this together.