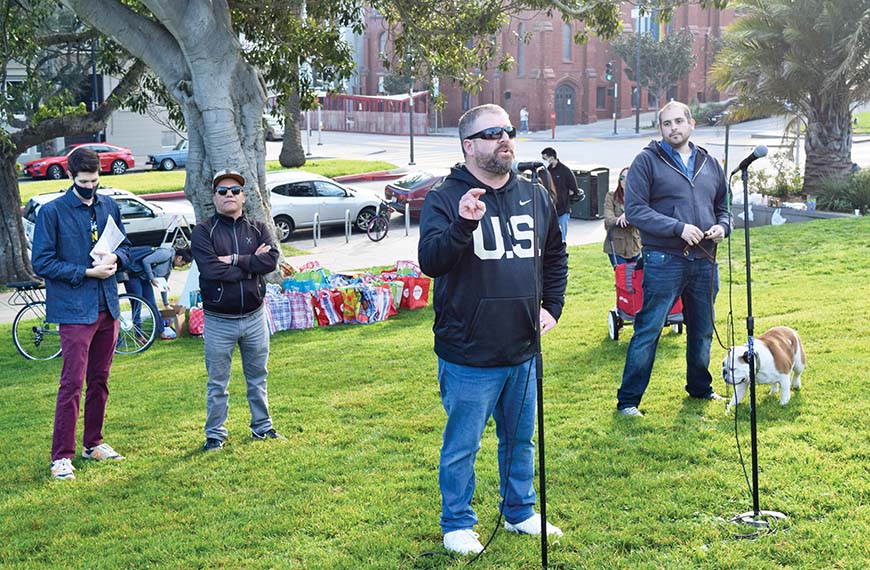 In the wake of longtime State Building and Construction Trades Council of California President Robbie Hunter’s retirement, Andrew Meredith assumed the top leadership role in January. Meredith brings a wealth of experience to his new position. His past roles range from IBEW electrician and union organizer to Iraq-deployed National Guardsman and politician. Most recently, he was the Northern California regional director for the State Building Trades.

Meredith approaches his work with the firm belief that when union brothers and sisters work together, they are able to forge a nearly unbreakable bond that transcends any disagreements or jurisdictional issues that might arise. During his time working as an IBEW organizer in Northern California, Meredith effectively opened up dialogue across political party lines — even in conservative, anti-labor areas — resulting in the passage of several unprecedented project labor agreements.

“We’re so closely tied together by all these battles we’ve waged that there’s nothing we can’t overcome,” he said.

As president, Meredith is already hard at work crafting legislation and building bridges by hiring and deploying staff to bolster lines of communication and strengthen ties between all of California’s building trades union affiliates and councils.

The following interview has been edited and condensed for clarity.

Organized Labor: Talk about your personal history with the labor movement.

Andrew Meredith: I grew up in a union household. My dad and my grandfather were both IBEW electricians. My mom was a teamster and a CWA worker during periods of my childhood. Growing up, the union presence was a big thing for me, but getting into the trades wasn’t something that I originally aspired to do. I saw how hard my father struggled. The Sacramento labor market was a lot different in the ’80s than it is today. It was a lot more difficult for union contractors, so I really remember periods where we struggled to make ends meet, and I didn’t picture myself doing that.

So, between my junior and senior years, I signed up for the military with the National Guard and went to basic training after high school. I also tried a semester of college but decided it wasn’t for me. However, having dated my wife since high school and wanting to get married, I knew that meant I had to get a steady job. So, I applied to the IBEW apprenticeship program, which was challenging to get into. It took me a little over a year, but when I finally got in, it was a life-changing opportunity for me. It provided a good-paying job, and my wife and I were able to buy our first home.

Unfortunately, I got deployed to Iraq in 2005 in the middle of my apprenticeship program, but while I was gone, my family was well-looked-after by my brothers and sisters at the IBEW. They did things like buy a Christmas tree and presents for my kids and just helped out while I was deployed. They are an amazing group of people, and the experience reinforced the importance of our union brotherhood for me.

OL: What leadership experience do you bring to your role as president?

AM: When I came home from Iraq, I got really interested in local politics. So, I ran for City Council in my hometown of Galt, which has a population of about 26,000. I got elected by a margin of 27 votes.

I spent four years on the City Council and worked on some pretty progressive pieces of legislation. We were the first city in California to mandate residential fire sprinklers, and, within a year, the state of California was pushing towards doing the exact same thing, mandating it statewide.

I also authored an ordinance to try and prevent Walmart from moving into our city in order to protect our union grocery stores. I challenged their lobbyists face-to-face, and they told me they would do everything in their power to make sure I never got re-elected. Even though we got the ordinance approved, Walmart designed a project that was 1,000 square feet below the threshold set by the legislation. But we were able to keep them out of the community for a while, and both of the union grocery stores are still open.

About halfway through my term, in 2010, I was hired as an IBEW organizer for the Redding and Chico areas. During my tenure, work-hours more than quadrupled, and we had almost 50 apprentices in our program, so it just grew exponentially.

In March of last year, President Robbie Hunter offered me the opportunity to come work for the State Building Trades as the Northern California regional director. The idea of working alongside Robbie Hunter, having watched what he’s been able to do over the last 10 years — it was an opportunity that was too good to pass up.

AM: We have a ton of jobs committed to the fossil-fuel sector, and it’s not just the oil and gas industry but heavy highway transportation as well. Conversations around electrifying transportation are going to dramatically change the funding mechanisms for doing road improvements and have dramatic impacts on the oil and gas sector workforce.

So, the biggest challenge for us is getting the state to understand that transitioning these workers out of those industries doesn’t involve retraining them. Our membership base has a very broad training focus that assures anything that needs to be constructed can be built by our members, whether it’s offshore wind projects or carbon-capture projects. They’re going to be built by the same boilermakers, electricians, plumbers, pipefitters, and operating engineers who are building things today. Our members are going to be able to meet the needs of whatever California needs to do.

As an organization, we believe in climate change, and we understand that it’s real and that there has to be a shift in the way we operate our economy. However, a decade of inaction in building energy infrastructure in California has left us in a position where, as great as it would be, we can’t just electrify everything, like the environmental groups want. So, we need to figure out how to get the environmental groups to stop being at loggerheads with us and to instead work with us to get some of these renewable energy projects built in California. I think it’s going to make the entire discussion about climate change and fossil fuels a lot easier.