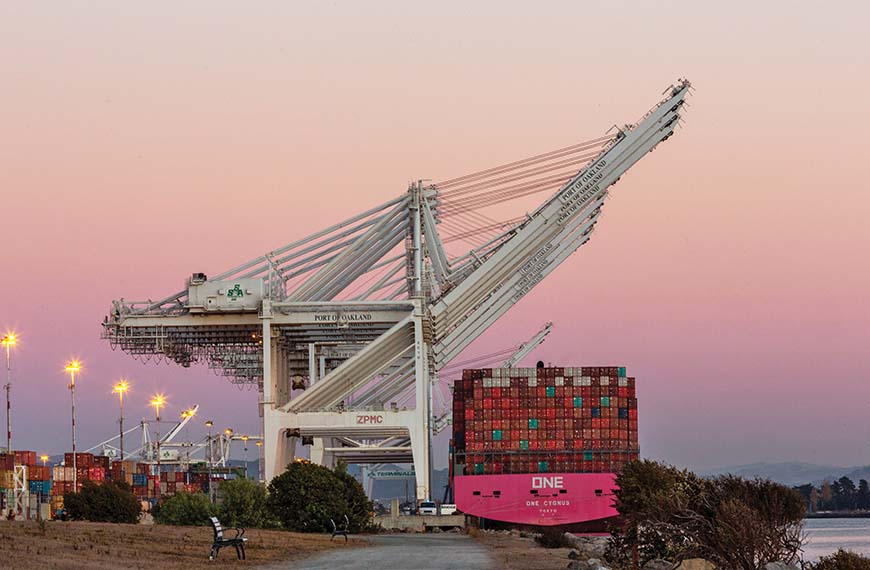 The global pandemic resulted in a major shift in consumer behavior, with a huge jump in the ordering of goods online during the past two years. This sent shockwaves through a global supply chain network already running on thin margins.

If those responsible for fulfilling these orders were lucky enough to find a shipping container, they then had to deal with transoceanic shipping prices that had shot up. Air freight prices followed suit. Once the cargo arrived at port, it still faced massive supply chain bottlenecks, most notably that U.S. trucking infrastructure just couldn’t handle the new demand.

The result? Huge delays, and cargo containers stacking up like Legos across both the eastern and western seaboards.

For Chris Rosell, who was recently appointed national organizing director for the International Brotherhood of Teamsters, the supply chain issues currently plaguing the country boil down to something very simple: misclassification of labor.

“We think it’s an issue for supply chain and transportation workers across all industries — not just the port industry,” Rosell said. “Workers who are in the transportation industry are being mandated by employers to, one: facilitate their own vehicles, but then, two: be on company standards.”

This makes little sense, Rosell argued, because so many of these workers are not traditional employees but independent contractors who are denied benefits, unprotected by government regulations, and paid poor wages thanks to logistics industry compensation schemes that reward a race to the bottom.

With workers trying to outbid each other, thereby pushing rates lower and lower, a staffing problem has developed, Rosell said: “It’s created a massive drop in logistics workers who are no longer interested [in the field] because they don’t see it as an industry with any future.”

This decrease in drivers has, in turn, amplified the supply chain bottleneck at the ports. Meanwhile, for the drivers who do continue picking up containers, deregulation of the industry and the lack of wage minimums or employee benefits has meant working extreme hours.

If that weren’t bad enough, many of these hours aren’t even compensated. Thanks to shortsighted — or downright anti-worker — stipulations laid out in the U.S. Department of Transportation’s freight and trucking hours-of-service regulations, time spent idling or sitting in lines doesn’t count toward a driver’s log.

“So, DOT might say you can only have a 14-hour day once, or you have to be done in 10-hour days,” Rosell explained, “but the reality is that during the commute back and forth to run in and out of the ports, drivers sit in lines to pick up containers so that they can get paid and are working between 16 to 20 hours a day.”

In February, Cory Peters, president of Oakland-based Best Drayage, spoke with logistics industry news outlet Freight Waves about how this issue is pushing Bay Area truckers from hauling containers at the Port of Oakland to becoming long-haul drivers, saying, “You can’t blame somebody for wanting to drive across the country as opposed to sitting at the port and getting abused all day long and spending eight to 10 hours waiting to get a load.”

At the Teamsters’ national headquarters in Washington, D.C., the priority is to fix all this.

“Our short-term goal is to use legislation, or use the National Labor Relations Board, to fight this issue of misclassification,” Rosell said, explaining that the union is working to get bills introduced and passed at both the California state level and the national level to reclassify workers as employees.

He cautioned, however, that logistics companies such as XPO in the ports of Los Angeles and San Diego as well as companies like FedEx and Amazon are throwing massive amounts of money into lobby efforts and legal fights against employee reclassification.

On a personal note, Rosell said he wanted to see more transportation workers join the union and give the Teamsters a stronger voice when bargaining with these larger companies.

“We believe that our numbers are the biggest tool to help us reach those misclassified workers and the thousands of workers who want to be organized,” he said. “We’re going to be doubling down on our efforts to organize the core industries of the Teamsters, and that — hopefully — will bring back our […] density so that we have a bigger strength at these negotiating tables.”

As the supply chain issues grind on and bottlenecks at the ports and beyond continue to wreak havoc on the economy, protecting drivers against exploitation from logistics companies and other large firms is as important as it’s ever been. But even after the situation has cooled off, Rosell said the Teamsters want to ensure that the 2 million truck drivers traversing America’s roads continue to be treated with the dignity they deserve.