High-Flying SFO PLA Expires Next Month. Will Renewal Be Cleared for Takeoff? 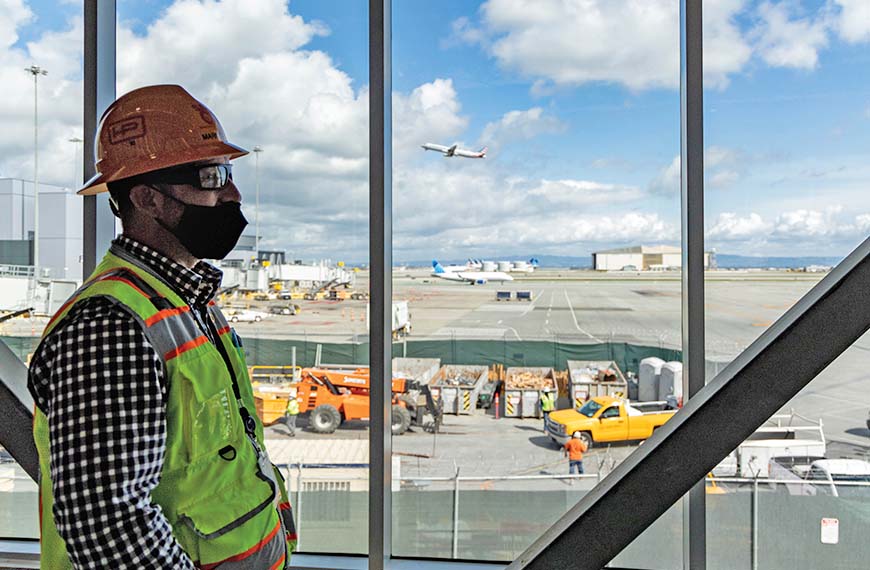 Meetings between the San Mateo County Building and Construction Trades Council (SMBCTC) and San Francisco International Airport (SFO) officials will begin in September to review a decade-old project labor agreement that expires this year. The goal is to establish a new or renewed agreement to cover the next 10 years of development at the airport.

“I’ve personally worked on SFO airport projects, and this PLA has provided workers in San Francisco and San Mateo counties with solid work opportunities for many years, and that’s the intention for the future,” said SMBCTC Business Manager Bart Pantoja. “We have a good thing going and want to continue that.”

Signed in 2012, the existing PLA has covered numerous projects over recent years, including the new air traffic control tower that opened in 2016, a hotel, Terminal 3 East, a new long-term parking structure, a baggage handling system modernization overhaul, international terminal upgrades, new cargo areas, and facilities for airport staff. The PLA is also in effect for the Harvey Milk Terminal 1 project, which is in the final phase of construction.

According to Doug Yakel, SFO’s public information officer, the history of the PLA dates back to an original agreement in the 1990s that covered projects under the airport’s master plan, such as building the international terminal. In the intervening years, events like 9/11, the SARS outbreak, and the Great Recession dulled the appetite for airport expansion. Work lagged.

But by 2012, SFO officials established a capital plan encompassing about 20 different projects worth a total of $4.7 billion that paved the way for rekindling an agreement with the building trades.

“As I look at the projects that have been covered under this PLA, what strikes me is that these were the kinds of new facilities that really transformed our airport into the modern SFO that people know,” Yakel said.

In addition to ensuring that prevailing wages are paid, a PLA helps maintain safety, which is crucial in an airport environment where work is often being performed in close proximity to running aircraft, Yakel said. The PLA has also helped complete projects on time and on budget.

“For us, that higher degree of safety and training gives us greater assurance,” he said. “It’s a need that’s been satisfied by union labor throughout the years.”

As PLAs go, the SFO agreement has had a relatively smooth run that’s been free of any major slowdowns or disputes, despite the many large projects it has covered. Pantoja said he could recall only two instances of grievances, both of which occurred about eight years ago. He said that while one of the PLA’s weak points is that it doesn’t cover federal work — projects falling under the Federal Aviation Administration’s purview — one of its unique strengths is that its local hire requirement covers both San Mateo and San Francisco county residents.

“It’s a good agreement as it is, but in the spirit of being thorough, the building trades will sit down with SFO officials to review it for the next 10 years,” Pantoja said.

While the remainder of Harvey Milk Terminal 1 work will continue to be covered under the existing PLA even after it expires, there’s no set date for breaking ground on future projects in the airport’s development pipeline.

“The Airport Development Plan outlines the next generation of facility projects that will help SFO grow to meet demand and passenger activity over the next 20 to 30 years,” Yakel said. “That could consist of extensions and enhancements to existing terminals as well as the construction of new terminals. We’re also looking at fundamentally reworking how the international terminal is structured and potentially revisiting new ways to use that facility space more effectively.”