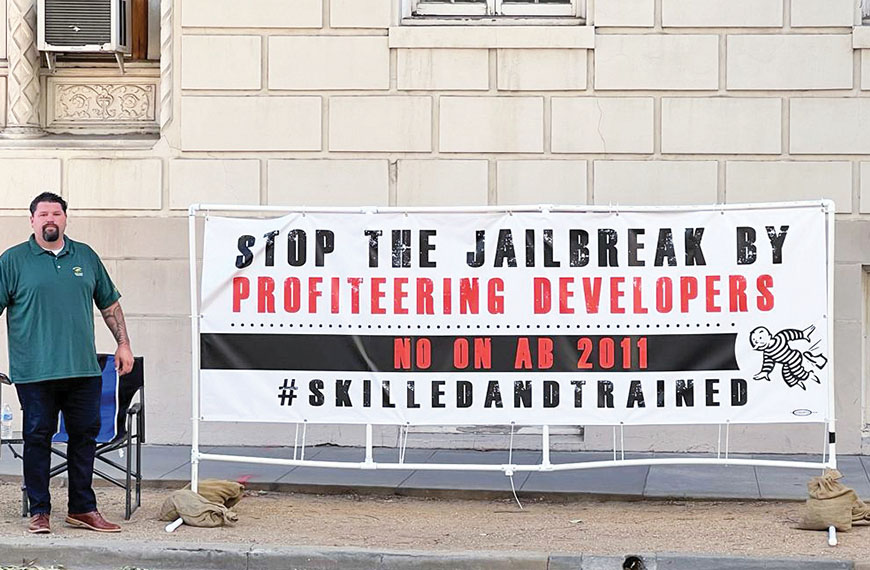 A battle is brewing in Sacramento as the California State Senate debates a significant bill that appears to pit workers’ rights against affordable housing advocacy. Assembly Bill 2011 (a.k.a. the Affordable Housing and High Road Jobs Act of 2022), which was advanced by the Assembly last month, would eliminate skilled-and-trained labor requirements and local control of development in exchange for the construction of more affordable housing more quickly.

AB 2011 seeks to do that by accelerating the development and redevelopment of vacant commercial property into affordable housing. It was authored by East Bay Assemblymember Buffy Wicks, a Democrat who represents the 15th Assembly District (including Berkeley, Emeryville, Richmond, other nearby cities, and 20.4% of Oakland).

If AB 2011 passes, it will clear the way for construction project streamlining and building “by right” on qualifying projects while eliminating the mandate that a skilled-and-trained workforce be a part of those construction crews.

The bill does include a prevailing wage requirement, and it also includes a developer-paid health benefit mandate, but only for builds of 50 or more units.

Erin Lehane, SBCTC’s legislative director, described the bill as a jailbreak for the development community.

“I think that it’s an effort by the developers to kind of dumb down labor standards and hire non-union construction workers who aren’t adequately protected or potentially trained,” she said.

Also of concern is that allowing for by-right development of existing commercial locations would permit developers to bypass local approvals processes.

“It takes away the ability for the local councils and local members to engage in developments that will impact their communities and where their families live,” Lehane said.

She also cautioned that AB 2011 would not sunset, allowing these skilled-and-trained and by-right provisions to remain in effect regardless of the state’s housing circumstances.

In a scathing letter to Wicks opposing the bill, Lehane warned of the “anti-worker corporate greed looking to fool this legislature and exploit a very real crisis on the backs of California’s blue-collar workforce.”

Alex Lantsberg, director of research advocacy for the San Francisco Electrical Construction Industry, has been following the issue of vacant commercial property closely. He estimates there’s nearly 5 million square feet of such space in the Bay Area, not to mention 17 million square feet in Los Angeles. He believes that property owners sit on empty commercial space for — in part, at least — the tax breaks.

“These commercial properties are really a strange sort of beast,” Lanstsberg said. “Right now, it’s just basically an idle asset that sits on their books.”

Lantsberg said he sees the value in incentivizing the turning over of empty commercial property into affordable housing. But what AB 2011 offers those property owners aren’t simply incentives, he said — they’re giveaways.

“Ultimately, what you’re dealing with is a huge gift to property owners in terms of what the underlying value is for those developments,” Lantsberg said.

Unlike the vast majority of its union building trades colleagues, the Oakland-based Northern California Carpenters Regional Council (NCCRC) — which has 22 affiliates and claims to represent a total 37,000 union members — has thrown its support behind AB 2011.

Speaking in favor of the bill at an April 27 California Assembly Housing and Community Development Committee hearing, NCCRC Executive Secretary-Treasurer Jay Bradshaw said, “We are here to get to work.”

Bradshaw went on to say that low wages and labor violations were rampant in residential construction. He appeared to imply that if AB 2011 passed, NCCRC-affiliated carpenters who were dispatched to jobsites would be in a position to recruit nonunion workers on the same jobsites, ultimately claiming the work arrangement facilitated by AB 2011 would “raise all workers […] and bring new folks in to get those rights on the job.”

When asked to elaborate for this article on NCCRC’s favorable AB 2011 position, Bradshaw provided the following statement: “AB 2011 addresses the crisis of available housing that plagues the state while protecting the very workers who will build this housing. This bill streamlines the process to allow more homes to be built here and now, not years or decades into the future, while delivering labor standards that provide family supporting wages, health insurance, apprenticeship opportunities, and the strongest labor enforcement provisions for private work in the nation. The housing crisis is crushing working-class Califorians due to lack of affordable housing and exploitation of nonunion workers on the job. AB 2011 brings a solution to both.”

At the April 27 hearing, Wicks said in support of her bill, “We have a housing crisis that is out of control. AB 2011 is a bold bill, but our housing crisis merits bold action.”

Wicks did not respond to requests for comment on this article by press time.

During the hearing, SF Building Trades Secretary-Treasurer Rudy Gonzalez voiced his opposition to the bill, as did a series of representatives from the ironworkers, sheet metal workers, electricians, cement masons, roofers, sprinkler fitters, insulators, and others in the trades.

“We believe the labor protections in this bill are illusory,” Martinez said at the hearing. “The lack of a requirement for contractors to support apprenticeships by utilizing a skilled-and-trained workforce means construction workers — workers who were deemed essential throughout the Covid-19 pandemic — are once again left out of the equation.”

So, what’s next? Lehane said that the SBCTC is working to get the legislation amended to treat workers more fairly, require a skilled-and-trained workforce, provide adequate enforcement, and include a sunsetting provision. The trades support the efforts for more affordable housing, she said, but not on the backs of workers.