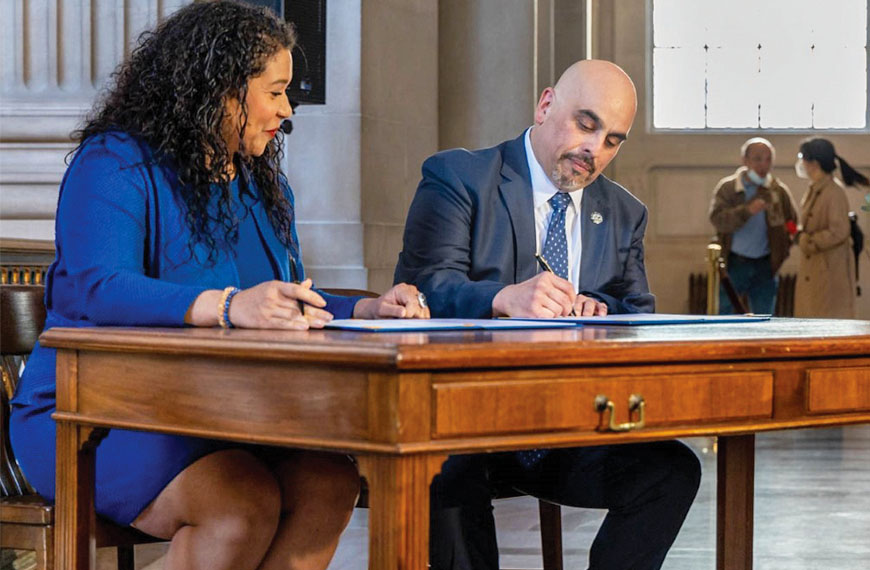 On February 15, IBEW Local 6 Business Representative Jose Fuentes Almanza made local history when he was appointed to the San Francisco Airport Commission by Mayor London Breed — Almanza is the first LatinX person to hold a seat on the commission in its 52-year history.

Almanza fills the unexpired term of recently retired airport commissioner and Pipefitters and Plumbers UA 38 patriarch Larry Mazzola Sr. Almanza was honored but a bit baffled by his achievement, saying, “After 52 years, not having one Latino on the board is a little shocking. I don’t know necessarily today how to accept that role or understand [being the first].”

While he might be ambivalent about what — if anything — it means to be the City’s first Latino airport commissioner, he was quick to add, “My kids are proud, I’m proud, my wife’s proud, and that goes a long way.”

Almanza is expected to bring a strong union voice to the commission, a governing body that establishes the policies by which the airport operates and, notably, has a significant voice in decisions about construction projects at SFO. Almanza’s entrance to union work was through UFCW Local 648, of which he was a member for 13 years before Local 6 and electrical work beckoned.

“I was looking for an opportunity to get into the trades,” Almanza said. After more than a decade post-high-school spent working at a Safeway, he was ready to make a change.

“That’s what you always learned growing up in the City: Join a union, get into something,” he said.

So, just as dot-com bubble of the late ‘90s began to burst, Almanza decided he’d sign up to be an apprentice with Local 6. He joined the union in 2000. Over the next 13 years, he would work on projects throughout the Bay Area while finding himself on a steady climb up the union ladder.

“The last job I was on in the field was the UCSF project on Mission Bay,” Almanza said, adding that when he left the jobsitefor the union office and negotiating table, it was only to better represent his union colleagues and strengthen their voices. And it appears he did that well: Almanza was elected to the negotiating committee as well as to Unit One, for inside wiremen, and, eventually, to chair of the Unit One committee.

His star was on the rise.

“I was on the examining board, and I got elected to the executive board, and then I got asked to come into the office as a business rep,” Almanza said. This impressive ascent over a seven-year period culminated in his delegation to the SF Building Trades Council, where he would help negotiate PLA work with the City and County.

Now, Almanza could be negotiating PLA work as part of the Airport Commission, which he initially became interested in through word-of-mouth.

“I was asked a couple of years ago by local labor leaders whether I would consider representing labor on a commission if the opportunity arose, and they suggested I submit my interest to City Hall,” Almanza said. “So, I did. When the possibility of a vacancy on the Airport Commission came, I expressed my interest, and the rest is history.”

With the caveat that he’s been to only one meeting so far — “I was sworn in on April 4th, and my first meeting was on the 5th,” he noted — Almanza said one of his goals as a commission member is to “continue representing labor, as the previous commissioner did well, and, hopefully, [union members] can feel confident that someone’s out there looking out for them.”