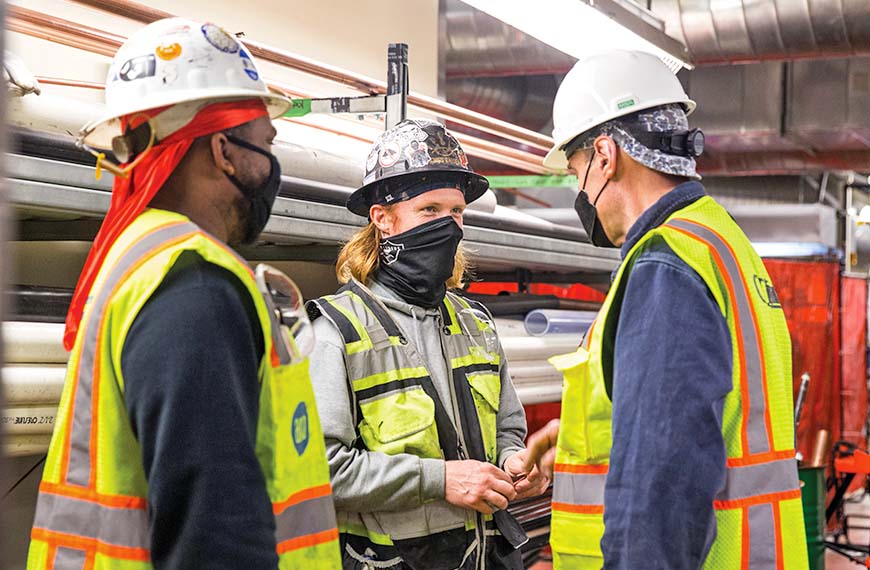 Last year was like a rollercoaster: If we started in a place of hope as two vaccines against COVID-19 became increasingly available to Americans, we were soon dealing with vaccination hesitancy and then outright vaccination rejection. Then came a new and more deadly strain of COVID in the form of the Delta variant. As Delta receded by fall 2021, it looked like the light at the end of the pandemic was shining brighter than ever.

That’s when Omicron showed up.

“It definitely took us back a few rungs down the ladder,” said Larry Mazzola Jr., business manager of United Association of Plumbers and Pipefitters Local 38, of the latest variant.

Mazzola said the plumbers and pipefitters in his local have spent the better part of two years waiting on a return to the volume of work they saw pre-pandemic but that each successive wave of the virus has only delayed things more.

“The biggest thing, I think, is the financial district,” he said, “because people are working remotely and companies aren’t moving in and out of the downtown office buildings anymore. All that tenant improvement work that used to be our bread and butter has dried up.”

Dan Torres, business representative of Sprinkler Fitters Local 483, has noticed the COVID variants having similar impacts on his local’s work-hours. So, to keep sprinkler fitters on the job, Local 483 has been promoting maintenance in place of new installs.

“That’s something that we’ve pushed hard on in the last couple of years,” Torres said, “because once they stopped building, what was going to continue bringing in work for our members? If they’re not getting [tenant improvement work] because people aren’t really going back to the office, it doesn’t negate the fact that that building has to properly maintain the fire extinguisher system.”

Torres admitted that while maintenance and installation might not be perfect equivalents in terms of hours delivered and wages paid, maintenance work certainly beats no work.

“The tenant improvement market has been severely impacted,” said John Doherty, business manager and financial secretary at IBEW Local 6. “[Everyone] has COVID fatigue. We just want to see this in the rearview mirror.”

However, it’s not all bad news. Doherty expressed his expectation that after the Omicron wave passes — and assuming no further variants emerge — companies will begin returning workers to the office, even if for just a few days a week. He said this shift back to on-site work could restart tenant improvement projects.

Doherty also expects new projects to begin ramping up by spring 2022: “It’s an excellent opportunity to get good-quality people,” he said. “I don’t think it’s going to start all at once, but it will pick up faster than we see normally when we come out of a downturn.”

Over at LIUNA Local 261, Business Manager Ramon Hernandez was bullish on 2022 should Omicron prove to be the final major COVID-variant wave.

“I say this is going to be a hell of a good year for us,” he said. “There’s a lot of work coming up — all the infrastructure and sewers in the city and county of San Francisco — so I expect a good year.”

Hernandez cautioned that January and February will be bellwether months for the rest of 2022 but concluded that “so far, labor is doing pretty good.”

Mazzola was optimistic as well, saying his people are raring to go.

So, if the beginning of this year is already feeling a bit like a painful flashback, with a receding COVID wave and a glimmer of hope on the horizon that might or might not be a mirage, keep in mind that there is good news this time around. Omicron seems to result in milder symptoms than past variants, and the general population is now more inoculated against the disease than ever before, thanks largely to vaccinations. While it’s slow-going, jobsites are indeed reopening.

And as those sites reopen, it is union members able to meet new safety protocols who are the ones returning to work first.

“I know people don’t like being told what to do — I don’t like being told what to do,” Mazzola said. “But in this case, when every top doctor in the United States is telling you that the shots are safe and it’s okay and that it’s going to help everybody else, I just urge people who are still on the fence to do it, because it’s the only way we’re going to get through this thing.”