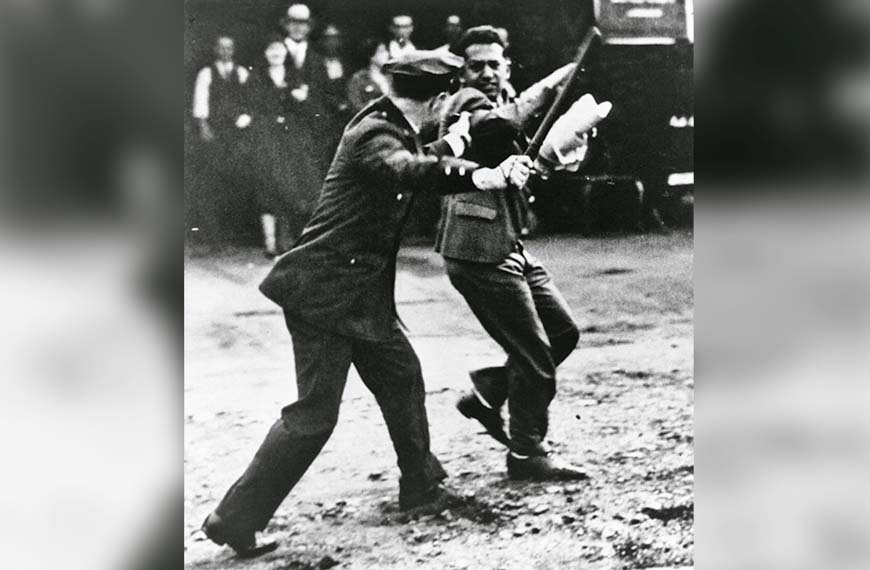 Tenacious Unionists Ensured They Wouldn’t Be Pushed Around by Bosses

Ever wonder how San Francisco got so union-strong in the first place? To learn the answer, we must look to the militant tenacity of our union forebears and their absolute commitment to the cause of organized labor to see what clinched the city as a workers’ town.

Workers’ efforts to organize in the city began before 1900, and they were fueled by SF’s whirlwind development in the years following the Gold Rush. The laborers were young, spirited, and unwilling to back down from a fight. As the city was home to one of the first employers’ associations in the U.S., the battle got heated. Still, those early workers’ doggedness ultimately won out, and San Francisco became California’s top closed-shop town and a national stronghold for unions.

Between 1900 and 1910, the working class gained considerable power through the Union Labor Party — but not before bloodshed. At the turn of the century, a rising cost of living meant that organizing was the critical path to better wages and working conditions for numerous industries. However, efforts to push for a closed-shop city were met with violent opposition under the tenure of Mayor James Phelan, the wealthy son of a Gold Rush banker, who hired henchmen to persecute unionists.

Amid the hostile atmosphere, workers had to dig in their heels and follow the process of organizing, demanding more, and eventually going on strike. According to California Historical Society member Dolores Waldorf, the subsequent formation of the Union Labor Party was a move by labor leaders to prevent the rise of an anti-worker figure like Phelan.

At the time, an explosion in union membership meant that there were 180 locals in the city. Conditions were ripe for the San Francisco Building and Construction Trades Council to begin enforcing the closed shop. In 1904, 42 unions were building trades affiliates, according to historian Michael Kazin, author of “Barons of Labor: The San Francisco Building Trades and Union Power in the Progressive Era.”

Other unions also embraced the closed shop model; however, the SF Building Trades successfully implemented an advantageous organizational structure under the council, relying on business agents to stand guard at jobsites to ensure that shop bosses followed contracts. The level of organization, coupled with a tight labor market out west, put the perfect amount of pressure on bosses.

In little time, San Francisco’s working class had become the highest-paid in the country.

The early successes boosted the role of unions in workers’ eyes and left them keen on pursuing the closed shop. According to historian Richard Walker, teamsters, sailors, and dockworkers got together in 1901 and formed the City Front Federation, which pressured the Shippers’ Association to pay union wages.

A strike involving more than 13,000 workers and backed by the San Francisco Labor Council lasted from July to October of that year. It turned deadly during a gun battle in which several workers were killed. However, with the city on the precipice of a general strike, then-Governor Henry Gage intervened on workers’ behalf, and San Francisco became a closed-shop city until World War I, when labor’s grip slipped.

“If the working class of San Francisco was down, it was not out,” Walker wrote. “When the Great Depression and the beginning of the New Deal began to weaken the power of capital, organized labor returned to the city with a vengeance.”

A strike by the longshoremen in 1934 was pivotal in reigniting the battle for higher wages and working conditions. After two strikers were killed on Market Street, the stage was set for a general strike by all San Francisco unions, effectively shutting the city down for three days, according to historian David Selvin.

Walker called the 1930s a decisive decade for American union power that began with the San Francisco general strike, led by Sam Darcy. Harry Bridges, head of the International Longshoreman and Warehouseman’s Union, was also a key figure. The decade also marked the revival of San Francisco’s closed shop status, which continued, fueled by prosperity and solidarity.

A lot of fighting and hard work got us here, and it’s the only thing that will keep us here.