Ironworker and Teamster School Us on the SFUSD Construction Crafts Coalition 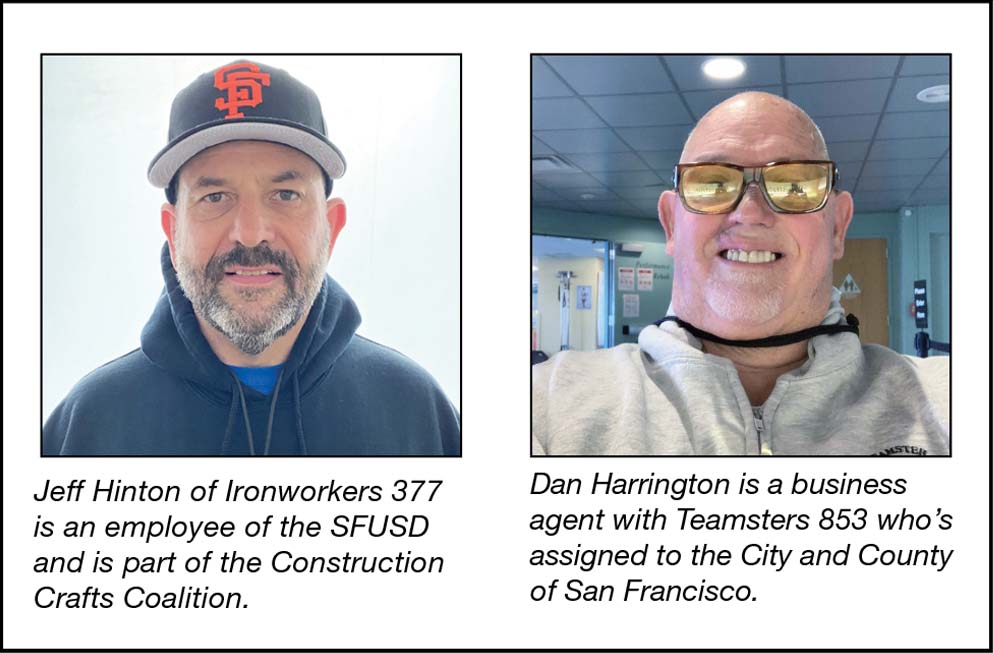 Editor’s Note: In this past June’s edition of Organized Labor, we heard from plumbers and glaziers who work as part of the San Francisco Unified School District’s Construction Crafts Coalition, as well as union electricians who work separately at SFUSD. This month, we’ll meet one Teamster and one ironworker from the SFUSD Crafts Coalition and find out about both the upsides and the challenges of being a part of the coalition.

Dan Harrington has been a business agent for Teamsters Local 853 since 1985, but it wasn’t until 1999 that he was assigned to the City and County of San Francisco.

At the time, union deals with the city weren’t done collectively; instead, Harrington said, “everybody was negotiating agreements separately.” The four or five biggest locals would sit down together with the mayor and pound out an agreement for the year, as Harrington recalls it, “and sometimes you’d get a chicken bone thrown to you to satisfy some of your own particular issues.”

From Harrington’s point of view, this tactic benefited the city more than anyone else.

“When you’re not [negotiating] collectively — and you have a position, and one of your counterparts has a completely different position — [the city will] see that as a weakness to exploit,” he said. “They’re not dummies.”

That’s why the SFUSD Crafts Coalition was formed about a decade ago, with Rudy Gonzalez now managing negotiations as head of the SF Building Trades. The collective bargaining has been a benefit for all the unions involved, Harrington said.

“The old saying is really true, and this pandemic is a perfect example of it: You’re much stronger together than you are apart,” he said.

His fellow Teamster truck drivers who work under the SFUSD Crafts Coalition work year-round, where drivers outside the coalition might work only nine months of the year. “[Non-coalition drivers] might be at $38 an hour, tops,” Harrington said, “but my same guy in the City and County of San Francisco is at $50-something.”

Of the drivers of Teamsters 853 who worked at SFUSD during the pandemic, Harrington said, “We have not lost one day of pay. On top of that, they took advantage of being able to do a lot of repairs that they have been having to table because of students being around.”

For Jeff Hinton, an ironworker with Local 377, the benefits of working with the SFUSD as a member of the Crafts Coalition were obvious: The convenience of commuting within San Francisco — the same city where he lives — affords him more time with his family, but there’s also the fact that “the job,” as he said, “is a lot easier on the body.”

The work is consistent, too. Even during the pandemic, while the schools were shut down to students, Hinton said, “we’ve been business-as-usual since day one.”

Hinton takes particular pride in an iron fence he and a colleague built during the pandemic. “I had to design and install it and just figure it out,” he said. “I hadn’t really done a lot of fencing before I came to the school district, so it was a good learning experience for me, and it turned out well.”

Would Hinton recommend working as part of the school district’s Crafts Coalition? “I would,” he said, “especially if you’re halfway into your career or something a little further. It’s a little less hard on your body, and it’s not working for a company — you’re working for the city, keeping things going. It’s a little less stressful, I’d say.”

Looking ahead, Harrington wants to see the SFUSD Crafts Coalition get past the pandemic and for a new contract to be signed with the city. Right now, “the school district has lost a lot of their main labor relations people and it’s handicapped them, because now only about two people [are negotiating],” Harrington said. “To really be honest, it seems like they’re just delaying.”

What Harrington hopes to achieve with a new contract is the resolution of issues such as parity, retention, and even “a couple premiums that they have in the city that they don’t have in [the school district]. That’ll be something that they would use to retain people.”