We Rise SF Expands Its Services for Immigrant Union Members 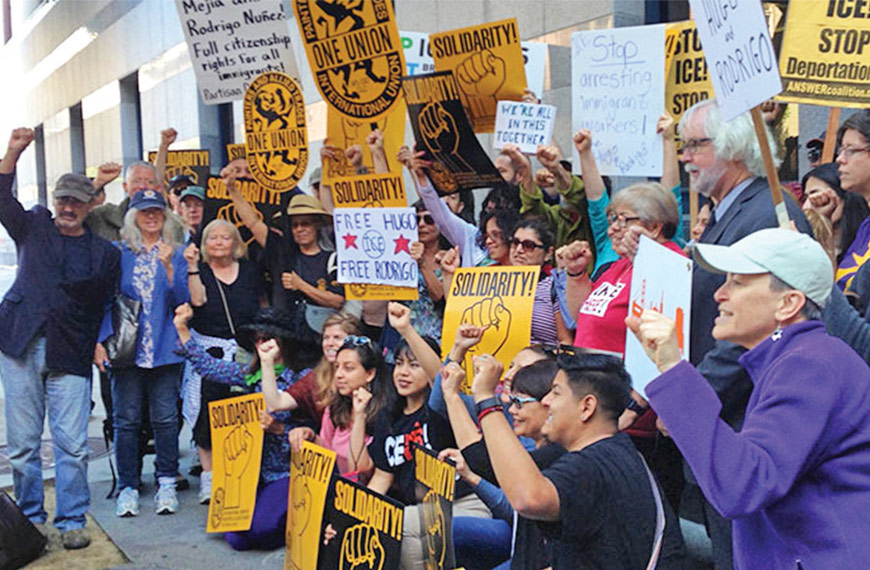 SF Labor Council Community Services Director Tom Ryan and Program Director Carlos Porras founded We Rise SF six years ago because they wanted to help immigrant workers have more of a place in the labor movement. The center conducts outreach to help immigrant workers understand their rights and the steps they can take to enhance their status, security, and stability in the United States.

Since its inception, We Rise SF has expanded its reach and is now serving thousands of members representing about 45 countries of origin and many spoken languages, reflecting the rich diversity of organized labor.

In recent years, the center’s work has become more rooted in the community — and particularly in the trades — as members learn about the issues faced by their fellow union member coworkers.

“You can’t make the assumption that everyone in your organization is free from vulnerability,” said IBEW 6 Business Representative Sabrina Hernandez, who has volunteered for We Rise SF’s citizenship workshops. “There are folks who I know in my organization are DACA recipients who can experience fear and anxiety due to living with the unique status.”

The vulnerability of immigrant union members was made crystal-clear in a 2017 incident involving a painter and carpenter whose status cost them their freedom after they simply tried to enter their jobsite.

International Union of Painters and Allied Trades Local Union 83 member Hugo Mejia and United Brotherhood of Carpenters Local 68L member Rodrigo Nuñez were held for months in detention by U.S. Immigration and Customs Enforcement (ICE) after they went to work a jobsite at a hospital within the Travis Air Force Base in Solano County. There, the two tradesmen were detained by military base staff and then handed over to ICE when they presented their California driver’s licenses and tax identification numbers instead of the Social Security numbers demanded by base staff.

The issue mobilized a national movement to fight for the rights of immigrant workers and served as a turning point for awareness about We Rise SF’s work.

With the onset of the COVID-19 pandemic, not all immigrant workers were covered by unemployment insurance or stimulus payments, so We Rise SF worked with the SF Building Trades to distribute $350,000 in aid to those in need.

Mejia and Nuñez’s ordeal shifted the center’s focus away from members working toward their path to citizenship and became more focused on their daily survival, Ryan said. Now, with the economy reopened and work picking back up, people are looking to move forward with their lives.

“It’s hard when you’re worried about your day-to-day existence to focus on other things,” Ryan said.

One service that We Rise SF provides is to assist members who are trying to qualify for partial payment assistance for their citizenship applications. The organization is also expanding its outreach efforts, working with the AFL-CIO in Texas and Washington to provide both virtual and in-person English-as-a-second-language (ESL) and citizenship classes.

In addition, Ryan said that they had made a presentation to the Building Trades to garner collaboration to institute an immigration support day for each union to make the process of administering services more efficient.

Additionally, We Rise SF has been providing virtual services to union workers at the San Francisco International Airport, assisting them with enhancing their legal status so that they can better provide for their families.

“I think it’s important to highlight the fact that our labor movement has always shined bright when we come together,” said Porras. “The fact that the center is big enough to run in the last six years successfully providing much-needed expert services to our members and their families has made it a beacon of hope for many immigrant workers who have come through the doors and have been able to successfully continue the processes of enhancing their status to be part of a safer, more secure, more integrated community.”