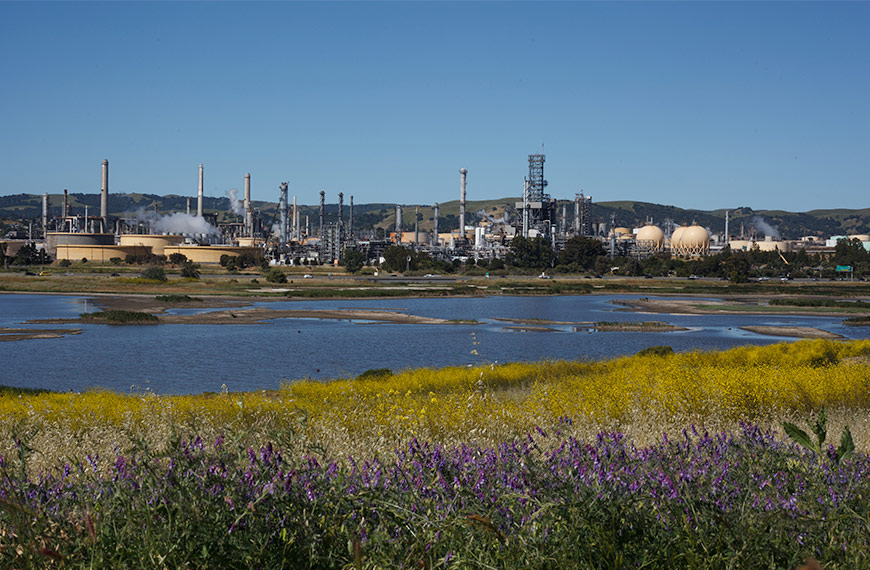 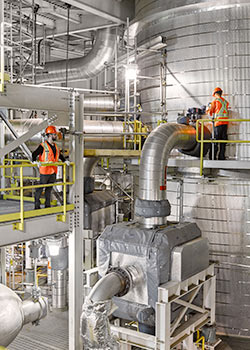 Boilermakers work on a carbon capture project in Alberta, Canada.

After years of nebulous discussion about achieving a “just transition” for workers shifting from laboring in a fossil fuel-based economy to a green energy-based one, a new report from the University of Massachusetts Amherst’s (Umass) Political Economy Research Institute now gives a clearer of view of what it will truly take to achieve such a transition in the Golden State.

The report’s lead author, UMass economist Robert Pollin, spoke at a June 10 press conference with labor leaders. The discussion focused on how to navigate a transition to cleaner energy as the negative effects of climate change caused by fossil fuel use escalate. This energy transition is aimed at helping the California cut carbon emissions by 50% by 2030 and become carbon-neutral by 2045.

While the goals are essential to improving the state’s air quality, labor leaders stress that workers must have a seat at the table to ensure that working families are not left behind in the process.

New Jobs for Some, Pink Slips for Others
Pollin said that the cost to transition the state’s energy infrastructure would total about $140 billion annually, which is slightly less than California’s average GDP, but would also generate about a million jobs per year. Such an outcome should — theoretically — yield a full-employment economy.

However, it could result in job losses for roughly 112,000 workers in the state with jobs in the fossil fuel industry, according to the report. Although a portion of those workers will be retiring anyway, many could be displaced. Workers in Kern, Contra Costa, and Los Angeles counties are likely to be especially impacted.

In Contra Costa County alone, the energy transition would cost about $5.5 billion annually and yield about 28,000 jobs. Because of the disproportionate impact, Pollin said that the report’s estimates granted a 4% overall investment to the county despite the fact that only 3% of the state’s population lives there.

Bill Whitney, CEO of the Contra Costa Building and Construction Trades Council, said that the county has enormous opportunities for clean energy infrastructure, with large areas suitable for solar and wind energy arrays. Already the Martinez Refinery Renewable Fuels Project is underway, which is set to convert the Marathon Refinery in Martinez from crude oil to biological-based oil refining. Similar efforts are underway for the Phillips 66 refinery in Rodeo.

A Plan With No Promises, Few Protections
However, with about 400 employees losing their jobs at the Marathon facility, Whitney said that the so-called just transition has not become a reality.

“Two-thirds of our membership are men and women of color and indigenous people,” Whitney said. “We're fighting for and protecting their livelihood, their jobs. We're not in opposition to cleaner water, cleaner soil, and cleaner air. We absolutely support that.”

Whitney said he hopes that as renewable energy technologies advance, the men and women who work in the Building Trades will be able to put their skills to use and absorb the jobs of the emerging economy.

Cynicism about the phrase “just transition” is rooted in politicians consistently viewing the labor movement as an afterthought, said Gonzalez, who sees the path forward as an uphill battle against uncommitted lawmakers and energy companies unconcerned about the welfare of workers. Data from North America’s Building Trades Unions (NABTU) show that 77% of wind industry jobs and 82% of solar jobs are non-union.

“I believe we have an uphill battle, because if this isn't done right and regulators don't spend their own political capital to ensure that these green jobs are good union jobs, what could happen is we roll back 50, 60, 70 years of labor standards,” Gonzalez said.

Transitioning Too Quickly?
Some, like Vice-President of the International Brotherhood of Boilermakers Tom Baca, believe the notion of a just transition is pure fiction, and the proper approach is to gradually transition away from fossil fuels to renewable energy as the technology improves. Another strategy he favors is to utilize carbon capture to both keep the economy up and running and help solve climate change.

Baca said the Building Trades are currently working with refineries, gas power plants, and hydrogen plants to negotiate statewide PLAs to retrofit carbon capture utilization and storage on all plants in California that emit carbon dioxide. Two pilot projects are starting in Pittsburg, CA, this month, he said.

“We want to get clean air, and we want to transition away from fossil fuels, but you can’t just hit a switch,” Baca said.

Differing Impacts on Different Tradespeople
The transition to clean energy won’t have the same impact across the board. With legislation passed to electrify San Francisco’s buildings and phase out natural gas, the future of the UA Local 38 Plumbers and Pipefitters, for instance, will hinge on a parallel transition to more sustainable water infrastructure. Conversely, electrification means that considerable work is already in the pipeline for IBEW Local 6 members, including solar, energy efficiency and electric vehicle charging station installations.

Although Pollin’s report provides a basis for conversations between politicians and labor leaders about what it will take to preserve strong wages and benefits for workers, Gonzalez said that, ultimately, it falls short. For example, the report doesn’t quantify protections for apprentices, whose work prospects and required skillsets could change mid-apprenticeship, or retirees, whose healthcare and pension plans are at risk if union memberships were to dwindle because of the energy transition.

“A lot of focus is on the active workforce, but there’s not enough about the pipeline of people entering or retiring from the trades,” Gonzalez said.

What does seem clear at this point is that if it stands a chance of being universally embraced by labor in California, today’s “just transition” might just need a whole lot more work.