Repairing San Francisco’s Schools Through the Pandemic Is A Big, Ongoing Job 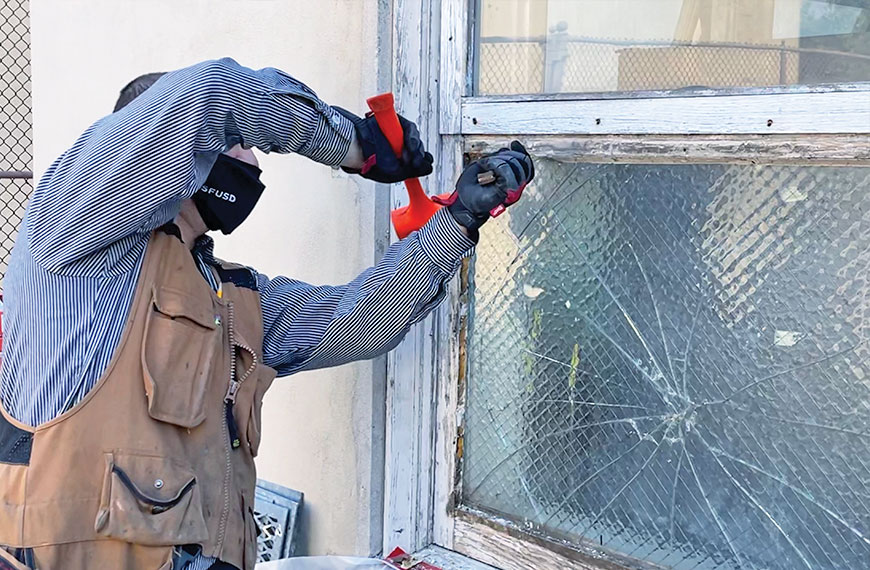 Editor’s Note: In last month’s edition of Organized Labor, we met the sheet metal workers, carpenters, and locksmiths who make up the SFUSD’s Construction Crafts Coalition. This month, we’ll hear from coalition plumbers and glaziers, as well as union electricians who work separately at SFUSD.

Building and trades union members are critical to maintaining the buildings and systems that power the San Francisco Unified School District (SFUSD). Starting in mid-March 2020, these members have had a unique opportunity to make significant and uninterrupted repairs on everything from windows to sewage systems.

Mike Powell, acting plumbing shop supervisor for UA Local 38, said the seven plumbers who make repairs for the approximately 114 school sites in the district had a backlog of more than 2,800 work orders before the pandemic.

“We’ve had 14 months to knock out many of these but also need to keep up with flushing many systems that are not in regular use,” Powell said. “The custodians have helped. When the kids come back in the fall, we’ll be so far ahead.”

Powell said one of the big jobs has been to replace deteriorated pipes under concrete slabs that sit beneath large locker rooms.

“With dedicated effort, we were able to get such jobs done within a month,” he said.

Powell said that as SFUSD Construction Crafts Coalition members negotiate a contract with the district, he wants to advocate for pay that is equal to that of comparable city and county workers.

Armando Hernandez, journeyman glazier for Glaziers Local 718, agrees. He is one of two Crafts Coalition glaziers employed by SFUSD. Two unfilled positions for glaziers remain open, in part because SFUSD glaziers are paid less than city and county employees.

“There are so many schools where windows had the panes broken or were inoperable,” Hernandez said. “Even with the schools closed for over a year, there is a great deal of demand to get all the windows fixed. Now, with COVID-19, air flow is more important than ever.”

He said cutting and installing the large panes of glass in buildings that are sometimes over a century old takes patience and strength: “It’s all about relaxing and taking the work one step at a time. Even when you’re carefully breaking out a cracked window, you try not to get frustrated. You avoid rushing. You want the work to turn out right.”

Hernandez said he also wants to advocate for a raise for glaziers.

“Currently, windows are in high demand,” he said. “Yet our craft is not as well-known or as highly compensated as other trades.”

Osha Ashworth, a business representative for IBEW Local 6, said the local is not one of the trades in the District’s Crafts Coalition. Yet electricians, too, want to receive equal pay for their work.

“There is a lot of turnover of electricians at SFUSD,” Ashworth said. “This is due to the wage disparity with the same classification at city departments. The electricians at SFUSD are looking for fair treatment. They are truly essential workers keeping school sites safe and in good repair with limited staffing and resources at the district.”

SFUSD currently employs nine electricians, all of whom are IBEW 6 members. Through the pandemic, these electricians have been repairing emergency lighting and fire alarms. They have also been fixing regular lighting for classrooms, offices, and outdoor areas.

“They have responded to make emergency repairs to malfunctioning kitchen equipment to serve the SFUSD community much-needed food,” Ashworth said. “Some may deem most important that they have been repairing and installing circuits for fans and air filters.”

Ashworth said that IBEW 6 members have consistently been making the necessary improvements for the return to in-person learning in the fall.

“These little things that people take for granted are now big things, like having enough power to plug in a portable HEPA air filter,” she said.