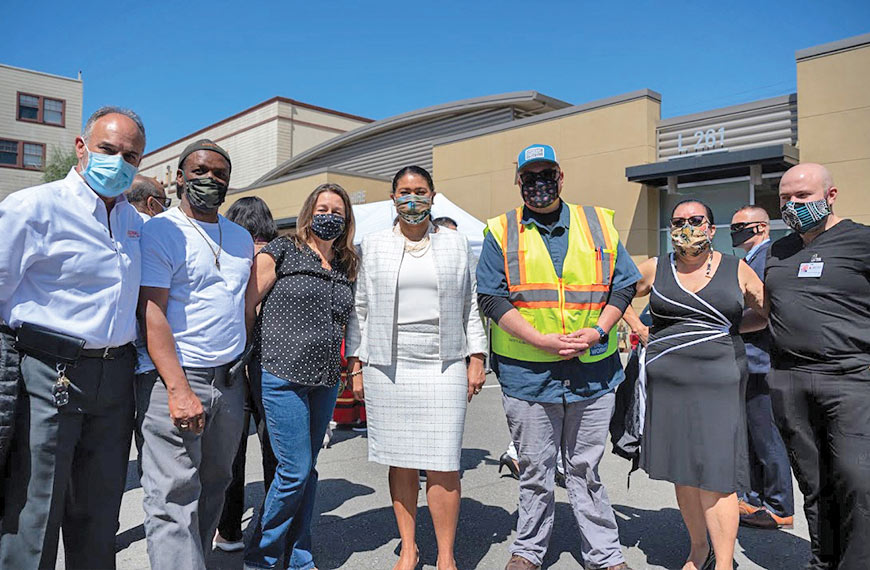 The COVID-19 pandemic hit the San Francisco Bay Area early and hard. But the distribution of COVID cases and the resources used to track and treat those cases were unequal.

As the city was hitting peak pandemic, “about 70% of all COVID tests were being done in the Embarcadero, where you had a 2% infection rate,” said Jon Jacobo, health committee chair of one of San Francisco’s newest community organizations, Latino Task Force. “Meanwhile, you had 30% of the city’s testing being done in neighborhoods that were literally on fire, where you had 14% infection rates.”

The neighborhoods Jacobo refers to are predominantly in the city’s southeast — places like the Mission and Excelsior.

To make matters worse, a COVID outbreak hit some members of Local 261 employed by the San Francisco Department of Public Works but who were not yet eligible for the vaccine. In January, some 70-plus Local 261 members (some of whom live in and around the Mission) were infected with COVID.

San Francisco city government was slow to address these inequalities, however, so the community banded together to address them itself. “We came together in March 2020 to respond to the pandemic,” Jacobo said, and Latino Task Force (LTF) was born. The group is so young, Jacobo said, that they haven’t yet filed 501(c)3 paperwork to become a registered nonprofit organization.

LTF initially began as a band of people sharing ideas about how to help neighbors meet their basic needs as the pandemic wreaked havoc on the working-class economy and workers’ personal finances.

“But quickly, of course, we saw that the levels of infection were much higher in the Latino community,” Jacobo said. “So, we sprang into action on masking and testing.”

LTF opened its first San Francisco hub at 24th and Capp streets in the Mission District to provide rental assistance, food boxes, and other basic services to the Latino community, in addition to launching the first low-barrier COVID testing center in the nation. It was an immediate success, and LTF set about searching for a second location in the area.

“For the neighborhood dynamics, we really wanted to make sure that we had something for the Lower Mission,” Jacobo said, explaining that it’s a part of the city where street crime can be an issue and services tend to be scarcer than elsewhere in San Francisco. The challenge became to bring the LTF love a bit further north in the Mission.

“We did all the meetings and all the city committees there,” said Laborers 261 Business Manager Ramon Hernandez. But since the pandemic hit, the hall had sat largely unused. One day, Hernandez got a call from Jacobo asking to use the hall for LTF services, and things took off instantly from there.

“It went from an idea at probably 11 in the morning to, by about two o’clock in the afternoon, the union being on board, with a few conditions, and the Department of Public Health with a soft ‘yes’” on licensing the Task Force for testing and vaccination distribution, Hernandez said.

“Our attorneys were working pretty fast,” he said. “In, like, two weeks, we put everything together. It happened without us even thinking twice.”

Since opening in April, the 18th and Shotwell hub has been pushing out vaccines to the community at a rate of some 400 shots a day.

“Everybody is very happy with the center,” said Hernandez. In fact, the partnership has been so successful that Laborers 270 in San Jose — or “our sister local,” as Hernandez referred to it — replicated the model.

The current partnership between Laborers 261 and LTF will run through July 31, but Hernandez said he hopes to continue the relationship and provide future healthcare resources and more to the community, collaboratively.

Jacobo hopes for the same. “I would absolutely want to continue this partnership with labor, and not just Local 261 — we’ve also been working with SEIU Local 87 — and I think the partnership could be a huge benefit to both.”

Make an appointment to get a vaccination at the Shotwell site in-person at 24th and Mission Wednesday through Sunday from 9 a.m. to 2 p.m., or at 701 Alabama Street Monday, Wednesday, Thursday and Friday, 10 a.m. to 3 p.m. You can also email This email address is being protected from spambots. You need JavaScript enabled to view it. to make an appointment request.