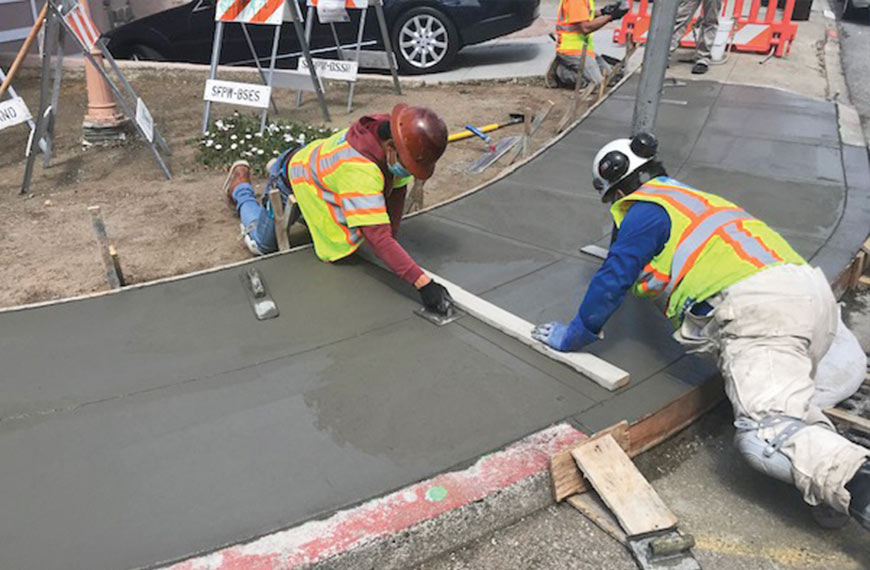 Seniors, people with disabilities, and those with mobility issues are finding the city easier to navigate thanks to union labor. That’s because members of several San Francisco building and trades locals build accessibility measures into sidewalks, roadways, and common areas like plazas.

“The city is very proactive in its scope, as to the street repair program and how it adheres to Americans with Disabilities Act (ADA) guidelines,” said David Johnson, business agent for Cement Masons 300.

Johnson said Local 300 members who are also San Francisco Public Works employees build curb ramps on the corners, which slope down to the street to allow a transition between the sidewalk and the roadway. The ramps have truncated domes that look like bumps. These notify people with visual impairments that they are entering a roadway.

“Our work involves creating and maintaining an ADA-accessible temporary path of access around curbs as we work on them, building the curb ramps, and removing debris like concrete,” said Johnson.

Rachel Gordon, director of policy and communications for San Francisco Public Works, said the agency builds about 1,200 curb ramps a year. The high number is partly due to the fact that whenever a street is repaved, Public Works is required to build ADA-compliant curb ramps. That work is done by Public Works employees and contractors.

“Everyone at Public Works is represented by a union,” Gordon said. “We’re proud to partner with city employee unions to serve the people of San Francisco.”

“SFMTA is installing additional mid-street walkways sited near senior centers and housing for people with disabilities,” Murphy said. “We install traffic signal lights that are wider than normal in diameter and ‘walk’ buttons at a height that people in a wheelchair can reach.”

SFMTA communicates with Public Works to ensure that “street furniture” such as trees and street lights are situated in a straight line outside the path of travel.

“This way people with visual impairments can walk down a street without encountering obstacles,” Murphy said.

Other changes include increasing countdown time at crosswalk signals and creating what Murphy called an “early walk,” in which the crosswalk signal “walking man” comes up four seconds before a green light. The early walk allows pedestrians time to begin crossing the street without vehicles turning in their path, reducing the likelihood a pedestrian will get hit, Murphy said.

Murphy started out as an electrician at SFMTA and worked his way up to being a supervisor who conducts inspections. He also served as a shop steward for IBEW 6.

“After working for SFMTA for over two decades, I bring up issues that are obvious to me from an electrician’s perspective but also known to me from personal experience,” Murphy said. “I am very conscious about providing a safe path with a minimum berth of three-and-a-half-feet clearance between objects for wheelchairs.”

Murphy said he takes pride in guiding other union members in creating safe pathways around their construction sites for all members of the public at intersections.

“When I meet engineers and other inspectors in the field for new traffic signal intersection design — or modifications or inspections — I constantly learn new ways to make life better and easier for all San Franciscans,” Murphy said. “I’m glad San Francisco is making these changes.”