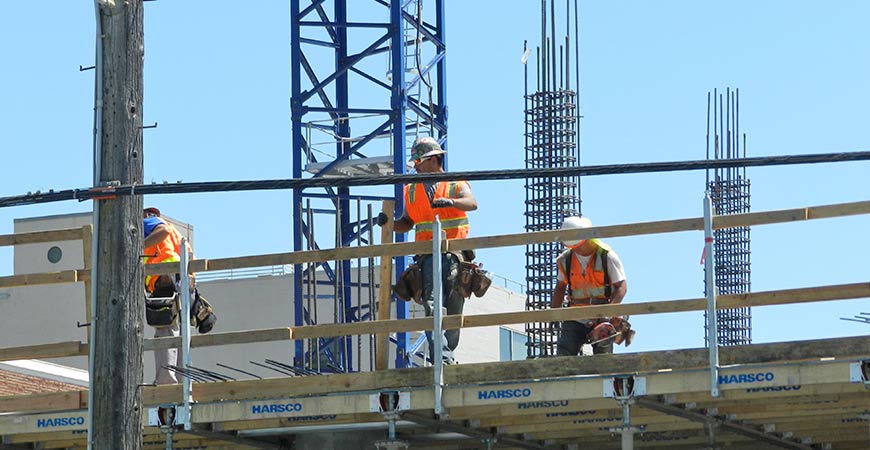 In an uncommon partnership, two separate real estate developments at 333 Brannan (pictured) and 345 Brannan are sharing a general contractor and working for the same tenant. - Photo by Paul Burton

Two new five-story office buildings at 333 and 345 Brannan streets are rising side by side in the South Beach/eastern South of Market neighborhood, with two separate real estate developers sharing a common general contractor and working for the same tenant.

“The goal is to work together to complete the project, essentially trying to please the same client,” Kilroy Realty’s project engineer for 333 Brannan Kyle Brown told Organized Labor. “It is a challenging project, with a shared tower crane and man lift and two different architects for two buildings.”

General contractor Swinerton started construction at 333 Brannan in March with excavation and demolition of two small warehouses, and broke ground on the 345 Brannan project in April. A statement from the contractor said Swinerton would be coordinating construction and logistics between the two projects.

In February, Kilroy Realty signed a 12-year lease with the cloud storage and data-sharing company Dropbox for all 182,000 square feet of the office space in the 333 Brannan building. A few days later, Dropbox signed a lease for all 102,585 square feet of office space at the adjacent 345 Brannan with developer Breevast. This follows Dropbox doubling its space at China Basin to 180,000 square feet, according to the San Francisco Business Times.

Brown said having a shared tenant, and a common general contractor, Swinerton, helps in coordinating the work. He said the projects are being built all-union.

On a recent site visit, Swinerton’s superintendent for 333 Brannan Larry Crawford said coordinating the work on the two projects “makes a lot of sense. It’s an opportunity with both projects next door to each other and having the same contractor to share resources and save money.” Crawford said all the subcontractors are union, and some subcontractors have crews at each job site. AMS Electric, O’Brien Mechanical and Cosco Fire will have crews on both projects. Crews from Pacific Structures and Harris Rebar are doing steel and iron work at 333, while Conco and Alamilla are handling that work at 345 Brannan. There are currently approximately 45 trades workers at 333 Brannan – including carpenters, laborers, operating engineers, cement masons and iron workers – with 20 to 25 on the 345 Brannan site. Crews from PG&E were also recently at the site making utility connections. Overhead lines were removed earlier this summer.

Crawford said he meets with his counterpart at 345 Brannan, Dean Gatewood, daily along with other contractors to coordinate the work plans, and then meet every Friday to plan and schedule the work and deliveries.

The five-story brick and concrete building at 333 Brannan will feature large, efficient, open floor plans. Brown said the design is environmentally friendly and will be LEED Platinum certified – with operable windows and a floor-to-ceiling façade on one side for natural lighting. It will also have an extensive green roof that will retain and reclaim rainwater to be filtered and used in the building. The sustainable design elements by architects William McDonough + Partners are expected to reduce energy usage by approximately 26 percent and water usage by 45 percent compared to a typical building of its size, according to Kilroy Realty.

Brown said the buildings will connect with 11 bridges on different floors between the two buildings, which will face off across a common courtyard. Brown noted that the design also fits the context of the historical look of the area, with a pre-cast brick façade that is similar to 301 Brannan next door. The projects are part of what is becoming a high tech cluster near 2nd and Brannan streets.

Amsterdam-based real estate developer Breevast bought the parcel at 345 Brannan, which until recently was a parking lot, in 2004.

Terry Crowley, CEO of Breevast’s U.S. division, based in Newport Beach, said the developers had, “collaborated on some mutual flexibility” and that the two combined buildings “would be a spectacular corporate campus.”

Designed by architect Charles Bloszies, 345 Brannan will also blend in with the historic industrial context of the neighborhood – with a terracotta rainscreen exterior. Inside, the concrete construction features high ceilings and an open floor plan with exposed HVAC and mechanical systems. It also will have a 7,000-square-foot deck and open space, as well as natural lighting and ventilation. The architect said that the City’s Planning Department encouraged collaboration on design features of the two buildings and their shared outdoor space.

Work at 333 Brannan is now at the second level, with 345 Brannan coming up to street level after excavation of the site earlier this year. Both buildings are on schedule for completion late in 2015.