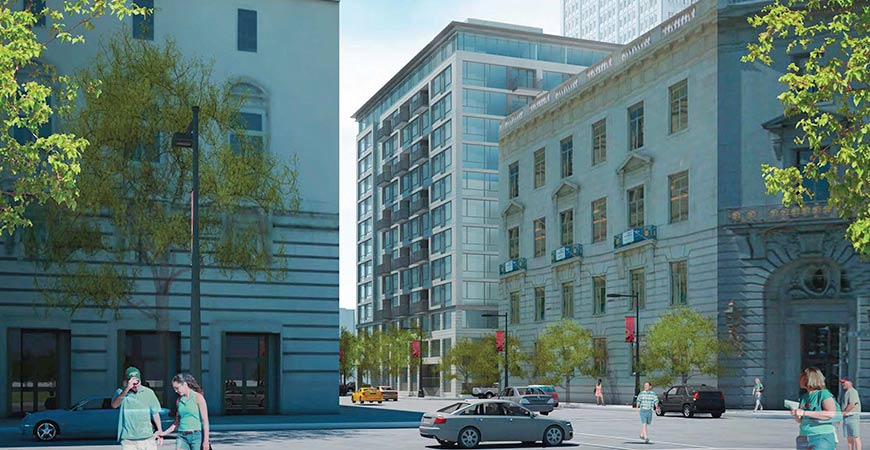 The 101 Polk development, helped along by $58 million in AFL-CIO Housing Investment Trust funds, is expected to generate approximately 350 union jobs and produce 2.24 million hours of work.

Beyond reasons of personal investment in making sure that you’re comfortable in retirement, pension money also plays a major role in the stimulating of the economy via funds that invest in construction projects throughout the country. Money gets put into a worker’s pension account; that money gets invested in the development of a new building which creates jobs; and the worker’s pension gets a nice return. Everyone wins.

But what if that system had an exclusive union focus? Money gets put into a union worker’s pension account; that money gets invested in the development of a new building which creates union jobs; and the union worker’s pension gets a nice return. Everyone wins, especially the unionized building trades. That’s exactly the mission of organizations such as the Multi-Employer Property Trust (MEPT), which was founded 32 years ago; and the 50-year-old AFL-CIO Housing Investment Trust (HIT).

Organized Labor spoke with Mike Ibarra, Senior Vice President of Investor Relations for MEPT; and Emily Johnstone, Director of the West Coast Office for the AFL-CIO HIT to learn more about how the investment of union pension dollars into union projects works to benefit all.

Explain in layman’s terms what each of your organizations does.
Johnstone: The AFL-CIO Housing Investment Trust invests in union-built multi-family and healthcare construction projects through the purchase of bonds. So we are a fixed-income fund that buys the bonds on union-built real estate.

Ibarra: We invest pension dollars in Taft Hartley and U.S. public pension funds, as well as a handful of international investors. We look for and invest in real estate in 25 major markets around the country, and build and manage them using responsible contracting policies that are very similar to what HIT talked about. They are all typically union built.

Sounds like a cyclical idea, investing pension dollars via job hours to create more jobs. Is that an accurate assessment?
Johnstone: Yes, it’s very cyclical. It’s symbiotic in that you are creating jobs for union workers; those union workers, because they’re generating hours, they’re putting more money into their pension funds and they’re putting money into the community. It’s benefitting union labor, but it’s also benefitting the corner store, the neighborhoods where these people live and shop and spend their dollars.

Now that the economy is better, funds are flourishing again, they’re adding dollars because we’re adding work hours. That impact hits the neighborhoods, it hits the cities, there are more taxes being paid because there are more job hours and people spending. So the total economic benefits of union construction projects are great.

Ibarra: We do an assessment of all the economic activity that has resulted from our investments and we do that every two years. The most recent of these studies was at the end of 2012 at the national level for number of jobs created as well as economic impact, and around 81 million job hours had been created since the inception of the fund and close to $16 billion of additional economic impact.

Maybe you could talk a little more about some recent projects in San Francisco.
Johnstone: One of our most recent projects to open was Rincon Green at 333 Harrison. This is a project South of Market done with a repeat developer of ours called the Emerald Fund. Rincon Green is 326 units, 49 of those are affordable. Affordability is another piece that the Housing Investment Trust thinks a lot about and cares a lot about. There were 716 construction jobs created during 333 Harrison. This is a project that started when the economy was really down and it really kind of kicked off a lot of the construction South of Market post-recession. So it’s something that we’re particularly proud of.

We just closed financing on 101 Polk St., another project in the city that will create several hundred jobs and about 450 construction jobs and significant economic impact.

Ibarra: There are three projects that we’ve done most recently that are development projects, but we’ve done investments beyond that. We’ve committed about $1.3 billion to projects in the Bay Area since 2010. That includes two very large multi-family projects; one at 10th and Martket, the other just broke ground in December at 299 Fremont. That one is 428 apartments as well as 43 low-income affordable units, which our fund made a $24 million commitment to in the development of those assets. On top of that we just most recently made a commitment of $104 million to a distribution center project out in Livermore.

Are people aware of these programs? How can people learn more?
Ibarra: I think there’s an overall awareness of the work we do and certainly some people are very aware of what goes on, but we have a bit of a generational shift going on among these organizations and it’s important to renew that message that, again, this is your money, you’ve got to make the choices in terms of how it gets the benefit of the funds.

Johnstone: We have an office based here in San Francisco and we’ve had it for many, many years and we really do try and be part of the community. I think most people know both of our firms because we are very involved in the labor community.

What are some of the challenges as you move forward?
Ibarra: There’s been a lot of scrutiny over the value of pension funds generally, but what we try and tell people is that you have to view pensions as assets that can reinvest back in the community, not solely as a liability, they’re much more than that and I don’t think that has been well communicated. There’s an enormous opportunity in this country to take those dollars and reinvest them back into our community.

To learn more about the MEPT or the AFL-CIO Housing Investment Trust visit their websites at www.mept.com and www.aflcio-hit.com.