How One of the Nation’s Strongest, Longest-Lasting Trades Councils Got Its Start and Built Its Power 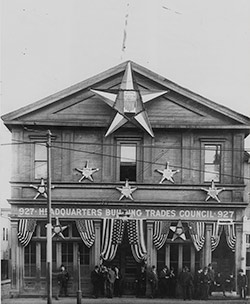 From the very beginning of the Gold Rush, workers in San Francisco have had to fight for better wages and working conditions. The significant contributions of the city’s earliest workers would go a long way in establishing San Francisco as a place “where unionism holds undisputed sway.” The building trades were among the first unions to organize, and the first recorded strike was by carpenters in 1849.

According to labor historian Lucile Eaves, “There are evidences of such early trade-union activity in San Francisco that one is tempted to believe that the craftsmen met each other on the way to California and agreed to unite.” The boom-and-bust economic cycles of the latter half of the 1800s meant that few unions survived and multiple attempts to establish a building trades council were short-lived.

A new era dawned when the San Francisco Building and Construction Trades Council was formed in 1896. Painter Robert McIvor was the Council’s leader for its first two years, but his successor, P.H. McCarthy, is a key reason San Francisco came to be known as a union-bossed town. Under his strong leadership — some called him iron-fisted — McCarthy brought together the often quarrelsome and competitive building trades unions into a highly effective bargaining instrument.

The Council brought order by prohibiting strikes that affected more than one craft without the Council’s consent and by outlawing jurisdictional strikes, and McCarthy skillfully navigated politics not only within the labor movement but also in the halls of government. He aligned the Council with powerful politicians and won a seat at the table for labor in key undertakings such as the new city charter, which included the provision for an eight-hour day and good wages for city workers and those working under city contracts, as well as the establishment of a civil-service form of employment to end a corrupt patronage system that controlled government jobs.

The key component to the Council’s success was building membership and solidarity across the trades. The carpenters led the way by issuing its members working cards required to secure a job, enabling them to establish a closed shop and eight-hour day. The painters sought a similar closed shop but took it a step further by working with the Council to establish a single working card for all of the trades on a jobsite, thereby greatly expanding the power of the Council and its member unions.

By 1900, the Council had secured a closed shop on all major building sites in San Francisco.

The Council’s first big challenge emerged in the planing mills, where workers made wooden doors and other fixtures that were essential to construction. The mill owners, who faced competition from low-paying non-union mills outside the Bay Area, refused to comply with the eight-hour day, and they organized to fight the workers’ demands by pre-emptively locking them out and effectively shutting down the city’s building projects in order to force them back to bargaining table.

The Council recognized the threat to the hard-won closed shop and came up with an extraordinary solution to get union-made fixtures back in production and to get construction back up-and-running: It built a union-owned planing mill. The Progressive Planing Mill No. 1 became the second largest in the city and scuttled the mill owners’ efforts to control bargaining by controlling the materials needed for construction.

A provision in the agreement stated the Council and its affiliated organizations would not handle material coming from any mill that did not adhere to the eight-hour day and employ unionized workers. So, not only were the workers all unionized, but the materials used in construction were exclusively union-made. The Council’s victory was good not just for the workers but also for the city’s mill owners because the provision protected them from outside competition.

This form of labor peace through mutual benefit was essential to the Council’s growth and power. Within five years, the Council had 32 member-unions, with a total of 15,000 members. From 1901 to 1905, the building trades conducted only 11 strikes, winning all but one. Meanwhile, the San Francisco Labor Council member-unions undertook 300 strikes in that same time period and won less than a third.

The Building Trades Council’s next great challenge came with the 1906 earthquake — the unexpected calamity devasted the city and threatened to destroy its unions, as the 1871 fire did in Chicago. Nearly three-quarters of the Council’s members lost their homes and work tools to the quake, and rents skyrocketed by 350%.

In order to help the city rebuild quickly, the Council immediately imposed a wage freeze and suspended trade rules for relief work. As workers streamed into the city to participate in reconstruction, they were brought into the union fold. Membership in the building trades unions increased 45% from pre-quake numbers. Within a year, $60 million in new construction was underway, and $75 million in aid was provided to feed and house the homeless. San Francisco building workers’ wages also ranked highest in the country.

San Francisco was the only city to have a labor party that won elections and maintained real power for a significant period of time. The Union Labor Party (ULP) saw candidates elected in both mayoral and supervisor positions and led the city for most of the first decade of the 20th century. After the quake, reformists, aligned with the ruling elites, targeted ULP Mayor Eugene Schmitz and his administration in a graft investigation that seriously undermined the party. (Unsurprisingly, the business leaders who offered the bribes were never prosecuted.)

Building Trades Council leaders saw this campaign as a way for business leaders to achieve through the courts what they could not at the ballot box. In 1909, Council head P.H. McCarthy ran on a reform platform on the ULP ticket and was elected mayor, leading San Francisco until 1911.

Historian Michael Kazin observes that in the first two decades of the 20th century, San Francisco workers built the strongest labor movement that existed in any American city. The building trades were central to that power, and they remain so today.

A note from the writer:

Visit library.sfsu.edu/larc to learn more about the Labor Archives and local labor history online. The archives, with funding from the Building Trades Council, have digitized back issues of Organized Labor from 1900 through 1988 and made them available in the California Digital Newspaper Collection at cdnc.ucr.edu.

Much of the information is this article can be found in Michael Kazin’s book “Barons of Labor: The San Francisco Building Trades and Union Power in the Progressive Era.”