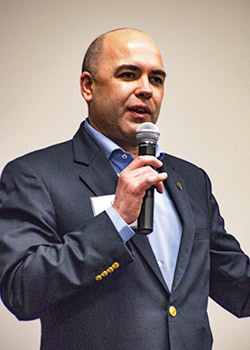 Chris Snyder, now on the board.

With a mission of providing “safe and reliable operation, maintenance and enhancement of the Golden Gate Bridge, and to provide transportation services, as resources allow, for customers within the U.S. Highway 101 Golden Gate Corridor,” the board oversees the special district that operates and maintains the Golden Gate Bridge and the Golden Gate Transit and Golden Gate Ferry public transit systems that connect the counties of Marin, Sonoma, San Francisco, and Contra Costa.

Each of the board’s 19 members is appointed by one of six Bay Area counties: San Francisco, Marin, Sonoma, Napa, Mendocino, and Del Norte. Theriault and Hernández represent the City and County of San Francisco. Snyder will represent Sonoma County, whose Board of Supervisors appointed Snyder as one of three Golden Gate Bridge District board members for the county.

“I am very excited to be a voice for workers and bring a working-class perspective to the board,” Snyder said. “It is important that the voices of people who are directly impacted by the decisions made by boards and commissions are heard. I want to encourage other union members to serve on public boards and run for public office.

“It is a great honor to serve on a board that’s in charge of operations at one of the most recognizable architectural landmarks in the state and globally. Building Trades Union members built the iconic structure and continue to maintain it. It’s an honor to be part of that labor history.”

The board faces challenges over the next year as it deals with a severe decline in bridge-toll revenue due to state-mandated stay-at-home orders in response to the COVID-19 pandemic. Snyder noted that ridership for Golden Gate Transit buses and Golden Gate Ferry service is down 90% from previous years. He said federal stimulus funds targeted for public transit have helped, but more federal support is needed to prevent layoffs.

“That’s one reason it was so important to elect Joe Biden,” Snyder said, referring to the president’s proposed COVID-19 relief plan, which extends and increases funding for public transit. “The political work directly translates to getting federal funding.”

Biden’s plan to more quickly roll out vaccination plans will also help get workers back out on the road and using public transit, Snyder said.

In his role as Government Relations Director for OE3, Snyder organized union members to get out the vote in Nevada for the Biden-Harris ticket, which won that state. Snyder also worked to drive votes for Labor’s campaign in Georgia to elect Raphael Warnock and Jon Ossoff to the U.S. Senate, thereby flipping the Senate from Republican to Democratic control.

Prior to his current job with OE3, Snyder served as District Representative, Business Representative, and Organizer for the union from 2006 to 2018. He worked as a Dredge and Marine Construction Deckhand from 2003 to 2005. Before joining OE3, Snyder was a member of the Inland Boatman’s Union, working as an Able-Bodied Seaman for the Golden Gate Ferry System and the Blue and Gold Fleet in the San Francisco Bay.

There are roughly 20 bargaining units for workers within the Golden Gate Bridge, Highway and Transportation District, from the Inland Boatman’s Union that represents ferry operators and the Amalgamated Transit Union that represents bus drivers to the Painters, Ironworkers, Operating Engineers, Laborers, and other trades that maintain the Golden Gate Bridge.

Snyder said his work as a rank-and-file union member, his understanding of collective bargaining agreements, and his personal experience growing up in poverty deepen his understanding of how layoffs and job cuts impact working families. Snyder said he first got involved in unions at age 21 while working on a fishing boat in Alaska. The boat crew staged a wildcat strike over extremely unsafe working conditions and an abusive boss, and were stranded.

“The ILWU helped us, and that made a big impression on me,” Snyder said. “Getting into a union transformed my life. Union membership really is a pathway to the middle class — it enabled me to buy a house, provide for my family, and have a secure retirement.”

Snyder also participated in the mass demonstrations at the World Trade Organization’s 1999 meeting in Seattle, where he marched with the ILWU as part of a strong labor, environmental, and social justice coalition opposing the WTO’s austerity measures. He was one of hundreds of protesters tear-gassed during the demonstrations.

“That really opened my eyes to the inequality and informed my life-view that it’s important to have people in power with a working-class perspective, and not just the perspective of bankers and financiers,” Snyder said.

Being appointed to the board is one of the biggest honors of his life, he said. “I hope to serve Sonoma County well.”

Snyder also serves on multiple Sonoma County boards and has been an active delegate for multiple labor and construction trades councils throughout the Bay. He holds a Bachelor of Arts in Political Science from California State University, East Bay, and an Associate’s Degree in Deck Engineering from the Seattle Maritime Academy.