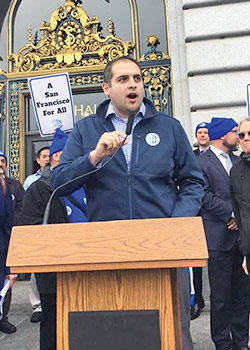 Informed by his Catholic upbringing’s social justice doctrine and motivated by a sense of stewardship instilled by his father’s lifelong career as a firefighter, he found purpose in building power for workers.

Gonzalez spoke with Organized Labor about his career and vision for the future.

OL: What have been the major influencing factors that steered you toward a career focused on fighting for the rights of working people?

RG: There’s nothing like learning on the job. My first campaign as a member organizer took me on 10-day rotations to Mississippi and Tennessee for about six months. It was a real eye-opener to see how vicious an employer could be to workers who were starting to form a union for the first time. It was also a moment of reflection and gratitude, as I became keenly aware of how I benefited from my union contract, which had been fought for and won long before I ever stepped foot on the job. Seeing people fear for their livelihoods and reputations just for saying the word “union” left a deep impression on me.

OL: Are there any particular experiences or accomplishments you gained from serving as Executive Director of the San Francisco Labor Council that will aid you in your new role as SFBCTC Secretary-Treasurer?

RG: In my first month on the job, we were knee-deep in the City-wide Project Labor Agreement campaign and struggling to win the Campaign to increase the Minimum Compensation Ordinance. We had a strike at UCSF, we kicked off the Prop G campaign to fund our public schools, and Speaker Pelosi was at our office holding a press conference to call out the GOP Tax Scam that had just been passed. We were also slowly burning the fuse on a contract campaign that would start and end in San Francisco, with thousands of hotel workers striking the largest hotel corporation in world history (Marriott). The strike ultimately lasted 63 days! My experience juggling high-stakes campaigns with time-sensitive demands of union leaders and elected officials will undoubtedly serve me well in the Trades Council. Thus far, I have primarily been tapping into my experience as a Teamster negotiator. Being at the table is as much about representing the interests of our affiliates as it is about developing a strategy that encourages cooperation over conflict. That said, the threat of conflict is often what drives the path to reach an agreement.

OL: You’re beginning your tenure during a period of great economic uncertainty and social change. What do you think will be crucial to keeping members employed and safe during this time?

RG: The Council has a unique role to play during this critical period. As the pandemic rages and countless workers lose their jobs, and in turn, their healthcare, we have the ability to stay working, as essential infrastructure and construction must be maintained. That places a heavy burden on our crafts as we face heightened exposure in both a political sense and to the COVID-19 virus itself. Our emphasis as a Council will need to include regional policy coordination and on-the-ground support for our local affiliates. Internally, we can play this role by providing our unions with the best information to protect members from worksite and community spread and connect the public health apparatus to our local union reps in a meaningful way. Externally, the Council will be a strong voice for our industry, to ensure that public health and policy outcomes include the voices of working families of the SFBCTC.

OL: Building Trades unions face many challenges stemming from legislation that fails to protect workers and changes in the culture at companies and the construction industry as a whole. What’s your vision for overcoming some of these hurdles?

RG: Organizing. Organizing. Organizing. You don’t need a Ph.D. in economics to know that if we aren’t organizing, we are dying. When we are organizing, we have power — legislative power, market power, negotiating power, union power. Our density in a trade isn’t the only way to measure the strength of our organizing efforts. We are increasingly finding ourselves in a defensive posture with lawmakers. We need to have our apprentices, journeywomen and journeymen organized, educated, and empowered to hold their elected officials accountable. That means weighing-in when our State Building Trades Council calls upon us and turning up the heat in the City when necessary. When it comes to winning our work, no developers, contractors, bureaucrats or elected officials can match the strength of organized labor. But we have to be organized.

RG: My hope for 2021 is that we find increased unity among organized labor, and through it, the power to win our demands. This is my hope for our San Francisco Unions as well as the broader movement. We are facing regional and global issues. From the pandemic to the price of rent, from healthcare to transportation and infrastructure, the issues that confront our time see no city limits and respect no county lines. Of course, on a very personal level, my hope is for the health and safety of the hardworking people and families of the SF Building and Construction Trades Council and all who toil alongside us.