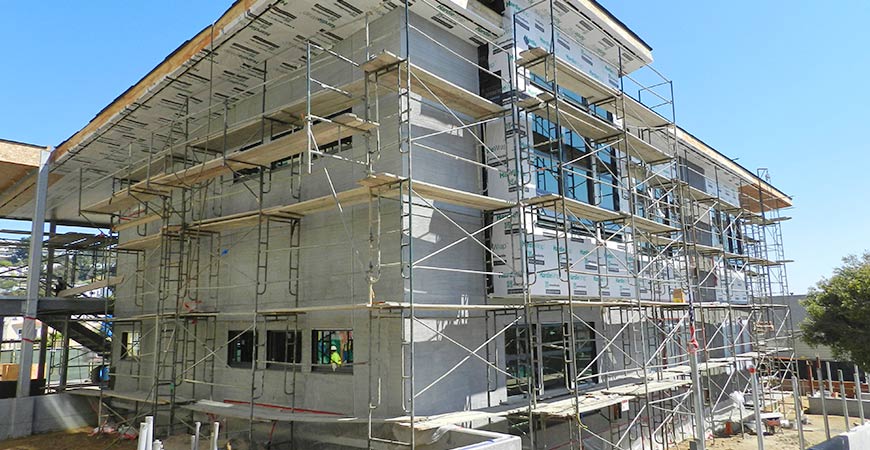 Editor’s note: This is the second in a series looking at modernization and safety improvements at San Francisco Unified School District facilities funded by a 2011 bond measure.

Work at several San Francisco Unified School District facilities is ongoing as a result of Prop A, passed by San Francisco voters in November 2011. The final portion of $1.3 billion in bonds approved by the voters is being used to modernize and improve safety at district schools, with some phases completed and projects seeing significant progress this summer. Work is also ongoing during the school session, with contractors, workers, SFUSD staff and school staff working together to ensure that construction activities aren’t disrupting the students’ educational experience and the work is completed on schedule.

The bond-funded projects focus on general modernization of the schools; some will get upgrades to be more accessible to students with disabilities, some will receive seismic and fire safety upgrades, and others will become more energy efficient. The $531 million bond fund is being used for upgrades and improvements to 47 school sites; those include 29 elementary and K-8 schools, six high schools, four middle schools, and five child development centers.

Sunnyside Elementary School is being modernized with improvements to its existing classrooms and the addition of a new building. The school serves approximately 370 students in kindergarten through fifth grade in the Sunnyside neighborhood between Glen Park and City College of San Francisco’s Ocean Avenue campus. The $8.5 million construction project is being managed by Swinerton, with general contractor Zolman Construction.

The school district’s senior project manager Kristen Harper Raymond, Zolman’s project manager Kasra Ramezanbeigi and Swinerton’s Faby Guillen-Urfer gave Organized Labor a tour of the school in late August. Raymond said the project consists of general modernization, including Americans with Disabilities Act (ADA) access improvements, fire/life-safety upgrades and some seismic retrofit work. The ADA improvements include installation of new hand rails and an elevator. The school’s new building will have six classrooms and a media center with an area for computer storage. The project’s architects are Pamela Collier and Franco Zaragoza from Levy Design Partners.

Each SFUSD project has a construction manager on site to coordinate and schedule the work and serve as liaison between the contractors, school district, school staff, parents and students. Swinerton’s Guillen-Urfer helps make sure the students are safe, the community is notified about the work, and that the contractors work within the constraints of the school day schedule. She said construction activities like grinding or use of jackhammers are limited to times when classes are not in session.

Raymond said work is being done in phases, and on schedule for completion in fall of 2015. As with other school construction projects, scheduling around the school day is challenging. The old building and playground are fenced off from the construction area for the new building; and the construction site has its own access for deliveries and staging on the side street away behind the school and away from where students enter.

Ramezanbeigi said there is an average of 20 to 30 trades members on the job. Subcontractors include Joseph J. Albanese for concrete, Harrison Drywall doing plastering, TLK Steel for structural steel work, RCM Fire Protection for fire sprinklers, Argo for framing, and Ascent elevator. Allied Environmental did the hazardous materials abatement and removal.

Much of the work on the existing building was completed during the summer, including construction of new and modernized student and staff bathrooms with new plumbing and electrical. A new kitchen with a transaction counter and roll-up door was also built. The modernization work also includes new fire protection and fire alarm systems, new flooring and ceilings, door replacements, interior painting, and new doors and hardware. A new clock and bell system, security system, phone systems and new higher grade wiring and IT systems were also completed before the school year started. Some seismic retrofit work was also done this summer.

Work on the new building started during the summer break. New metal stairs, windows, and siding are being installed and crews are now working on the interior spaces as well as doing exterior plastering and painting. Cabinetry and finishes inside the classroom spaces will follow. When the new building is complete, some classes will be moved there and more modernization will be done to the old building. Other work includes removal of existing bungalows, replacement of the exterior stairs at the auditorium, striping, and regrading. The next phases of the project will see the classes on the original building’s third floor relocated to the new building so that floor can be renovated. Work on administrative offices will also be done next spring, and next summer other classrooms will be renovated and completed.

Sunnyside will also get some enviromentally friendly improvements. There will be use of natural lighting and ventilation in the new building and motion sensor lighting to save energy. Low-VOC paints are also being used. Raymond said that the school would meet the requirements of the California High Performance Schools program for energy efficiency and sustainable design. Another feature of the school will be an outdoor classroom area that Raymond said would be developed by the community as part of the school’s “greening plan” – it could become the site of a garden or outdoor study area.

Raymond said pre-qualification of subcontractors was required because the school will receive some state funding for the modernization. Many of the contractors have experience on other SFUSD projects.

Raymond said the District has a good relationship with the San Francisco Building Trades Council, and the experience working on the second bond program with a project labor agreement has been good and positive. She said the project is ahead of schedule and on budget, and that the PLA was a benefit.

“We appreciate the flexibility of the school staff and the community, as well as the contractors who work within the rules regarding noise and scheduling,” Raymond said. “It allows the school to keep the learning experience going.”

Phillip and Sala Burton Academic High School was established in 1984, named after former California Assembly and U.S. Congress member Phillip Burton – known as a champion of civil rights and liberal causes, and author of the Burton Act that protects the state’s coastal resources.

Modernization of the school building is focused on upgrading ADA access, along with installation of new windows and flooring. Organized Labor visited the jobsite September 2.

The District’s project manager Erin Hirst said the District and the contractors work closely with the school principal to coordinate the construction schedule. She said the focus this summer was to get the bathrooms reconfigured, with wider doorways and new plumbing fixtures. Hirst said work started June 1 on the first floor, which will be completed this December. Work will then proceed up to the third floor in phases until completion at the end of the summer of 2016. Hirst said that because the school isn’t at full capacity, classes haven’t had to be relocated during construction. Use of jackhammers and drilling is limited to times when school is out.

Kitchell Construction is the Construction Manager for the $25.6 million project, with Alten as the General Contractor. Kitchell’s Superintendent Steve Dewan said although the school’s building dates from 1954, it is solid. He said the biggest piece of the seismic retrofit is the installation of new concrete piers that will go down to bedrock and up three floors with a shear wall along the building’s eastern side. Dewan said the structural retrofit also includes wrapping window columns with a fiber-reinforced polymer wrap.

Union subcontractors include Dowdle & Sons Mechanical installing new plumbing fixtures. Crews from Alcor Electric are putting in the new fire alarms and new wiring for the P.A. and IT systems. This summer, new tile was installed in the bathrooms by crews from Cal Tile. Hazardous materials removal and abatement, including removal of old flooring material, was done this summer by crews of laborers from Allied Environmental. All the contractors have worked on other SFUSD projects under earlier bonds.

Hirst and Dewan said construction is on schedule, and the PLA is a benefit. There are currently between 10 and 20 construction trades workers on the project, including carpenters, laborers, electrical workers and plumbers.