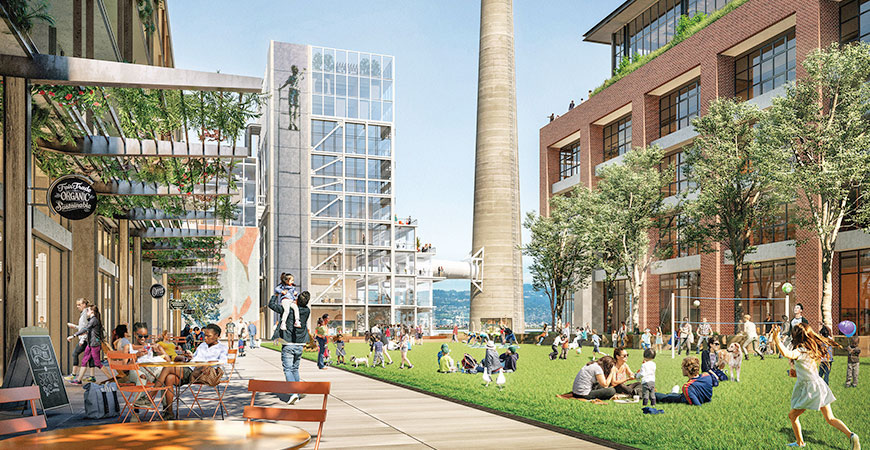 The Change will Allow for Housing Component to be Built Sooner

Earlier this year, a major development slated for San Francisco’s central waterfront won unanimous approval by the Planning Commission, Board of Supervisors and the Port Commission. The Potrero Power Station project by developer Associate Capital is located on 29 acres just south of Pier 70 that will give land formerly used by the long-shuttered power station a new purpose as a mixed-use development. The development will yield a total of 2,601 residential units, nearly 1.5 million square feet of office, life science and lab space, a 241,574 square foot hotel and 99,464 square feet of retail. Thirty percent of the housing units will be designated below-market-rate, with one building dedicated to supplying 100 percent affordable units. Additionally the plans call for community facilities and seven acres of waterfront open space.

Two of the key features that have drawn strong support from several community groups are the preservation of historic landmarks on the site and the project’s large residential component. The SFBCTC has also been a primary proponent of the project, which is expected to generate hundreds of union construction jobs covered under a project labor agreement.

“It’s been a big victory for the Building Trades to get a PLA done for the tons of housing, office and retail that’s coming to this historic site,” said SFBCTC Secretary-Treasurer Tim Paulson. “We went through difficult negotiations for over a year but eventually got everything we wanted.”

This fall the development team proposed a modification to the project’s buildout timeline, which was ultimately approved by the Planning Commission through an office space allocation as required under Prop M. Although the overall timeline for the project to be built over the course of a 10 to 15 year period hasn’t changed, the allocation has resulted in significant changes to Phase I.

According to Associate Capital spokesperson P.J. Johnston, the developer had worked with the city to increase the size and scope of Phase I. Overall the previous six phases have now morphed into three larger phases with the aim of achieving the buildout of affordable housing sooner and the expedited reintroduction of the historic Station A.

Station A is a dilapidated historic industrial building on the site. Since the preservation of Station A was identified as a top priority of community members who offered feedback on the plans, the rehabilitation and repurposing of the building has been advanced to Phase I as well as the construction of a building offering 100 percent affordable housing.

“I’m incredibly proud that Station A is the first building we’re bringing forward, and soon work will begin to stabilize, preserve and adapt this well-loved structure,” said Enrique Landa, partner at Associate Capital. “This first building being in the first phase is a response to the community’s request that it be stabilized early in the project.”

According to Planning Department staff, the project will increase employment in an area that is well-served by public transit and supported by commercial land uses. Johnston noted that the Potrero Power Station is the first major project to achieve entitlements and be delivered by the city’s planning process during the COVID-19 era. “The process managed to continue to work and we think that it’s important because the project is going to be a big part of San Francisco’s economic recovery as we come out of the pandemic,” Johnston said.

Due to continued uncertainty over construction projects during the pandemic, an exact date for groundbreaking has not yet been set. It is anticipated that vertical construction will begin in 2023.