2020 Election Results in a Medley of Delight and Disappointment 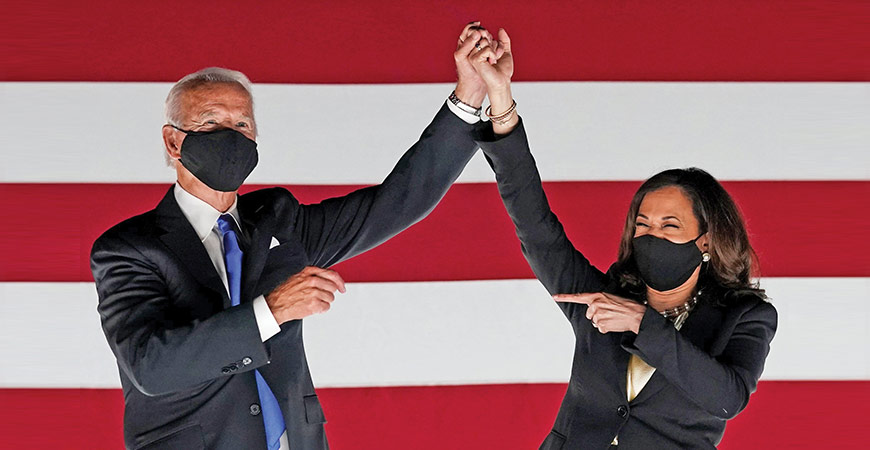 With Much Still at Stake, the Fight Goes On

The November 3 General Election represented the culmination of months of political strain with a backdrop of the COVID-19 pandemic that ratcheted up pre-existing tensions on the national stage. In San Francisco, that tension manifested in the form of businesses temporarily boarded up by owners who were concerned about civil unrest. Despite this, the city remained quiet but active on polling day as day turned into night revealing a divided nation with the Presidential race locked in a seeming dead heat, leaving many people surprised. However as the hours passed, Joe Biden and Kamala Harris emerged as apparent winners for President and Vice President.

“There is a certain disappointment to know that there are that many people in this country that still believe Donald Trump deserved another term,” said Tim Paulson, SFBCTC secretary-treasurer. “Joe Biden’s victory was much closer than the American people deserved. It’s just incredibly disappointing that so many people voted for Donald Trump, because our values are for workers’ values and for equity and for not separating families and for making sure that everyone has a fair chance in this nation. It really goes to show you how divided this country still really is.”

SFBCTC President Larry Mazzola Jr. said that Biden’s win is also a huge win for workers as the past four years have shown an administration steadily busy trying to roll back workers’ rights and protections. By contrast, Biden and Harris have solid track records regarding labor, demonstrating that they care about workers and unions, and that they will appoint labor-friendly officials and pursue policies that will bolster workers’ rights even more.

In California, political tension centered around Prop 22, brought by Uber and Lyft to strip their workers of rights recently earned through Assembly Bill 5.

The Labor community’s battle for “No on 22” ultimately didn’t stand up to the over $200 million that the gig companies fueled into their campaigns. The Proposition passed.

“Prop 22 was a big one for workers and it’s a shame that Uber and Lyft would rather put millions into defeating something that would help workers instead of putting that money toward giving their workers healthcare,” said Mazzola, Jr. “It just shows you that they value profits more than people.”

Locally the results of various ballot measures were a mixed bag in terms of Building Trades interests. However the passage of Prop F will bode well for City workers. A majority of the SFBCTC’s endorsed candidates for district supervisor won their races, including Ahsha Safai who prevailed in a tight race in District 11. Incumbent Aaron Peskin in District 3 handily re-won his seat.

SFBCTC-endorsed candidates won four out of five endorsed races for district supervisor — some of them aided by the city’s ranked choice voting system. In District 1, Marjan Philhour, former senior advisor to Mayor London Breed, lost to Connie Chan by a very thin margin. While the Building Trades Council’s first choice in District 7, Ben Matranga, lost his bid, the second-place endorsed candidate, Myrna Melgar came out on top. Melgar previously served as Planning Commission president. In District 9, Hillary Ronen won back her seat running unopposed. Another incumbent, Ahsha Safai in District 11, was able to pull off a win over former Supervisor John Avalos.

“Ahsha Safai was very instrumental in getting the Citywide PLA across the finish line along with Aaron Peskin, and those two guys have been great allies of the Building Trades,” said Mazzola, Jr. “It’s nice to have them in there for another four years to help us with our issues and legislation that we need to help protect our Building Trades workers.”

The SFBCTC had backed two important revenue measures — Prop F and Prop J — both of which voters passed by wide margins. Prop F, the Business Tax Overhaul, will help save public sector jobs amidst the City’s revenue shortfall due to the COVID-19 pandemic.

“Prof F is huge for our City and County workers,” said Mazzola, Jr. “Their raises are basically dependent on that passing, so hopefully because that passed, raises will be secured and layoffs may be avoided. It’s definitely a step in the right direction for fixing the budget.”

Prop J is a parcel tax that is set to bring in about $48 million annually to go toward the San Francisco Unified School District’s teachers. The proposition received nearly 75 percent “Yes” votes.

The passage of Prop I is a disappointing outcome for the Building Trades. The Real Estate Transfer Tax could tarnish development in San Francisco because it imposes a tax rate hike on the transfer of properties worth over $10 million. SFBCTC leadership had unsuccessfully lobbied Supervisor Dean Preston, the measure’s author, to amend the text to soften the impact on construction and development.

“It’s going to hurt construction jobs in the future — there’s no doubt about it,” said Mazzola, Jr. “And with this unnecessary tax, Preston said that the money will go toward building housing, but there’s nothing in the text of the measure that makes that happen. It’s very disappointing.”

Prop A, the $487,500,000 housing, homelessness, parks and streets bond passed smoothly with 71 percent “Yes” votes, and will allocate funds for high priority issues in the city such as building affordable supportive housing, creating and maintaining recreational areas and making streetscape improvements. All that work falls under the Citywide PLA and helps keep Building Trades members working.

The SFBCTC also endorsed Prop B that only needed a simple majority to pass. The measure will amend a City Charter to break up the Public Works Department thereby creating a Department of Sanitation and Streets in addition to a commission that will oversee the new agency. The rationale is to help keep the city cleaner and address corruption that had plagued Public Works. “It will help keep a level playing field for contractors and workers alike,” said Mazzola, Jr.

Two major state ballot measures wound up with unfortunate results for Labor interests. The Building Trades Council along with other Labor groups had campaigned hard for “No” on 22 and “Yes” on 15. Prop 22 was crafted by gig economy companies Uber and Lyft as a means to not give their workers any benefits while profiting off not only their labor but also worker-funded equipment such as vehicles and smartphones that are necessary to do the job.

Prop 15 sought to raise business taxes by using market value instead of purchase price as a benchmark for determining property taxes paid by commercial property owners. If it had passed, the revenue would have gone toward local governments and schools. The measure would have undone some property tax restrictions put in place by Prop 13 in 1978.

“It’s a big disappointment because despite the enormous amount of work the Labor movement did to pass Yes on 15 and No on 22, it’s clear that the constant bombardment and millions of dollars that were spent to convince Californians to vote against their own interests shows that money still has too much play in the American political system,” said Paulson.