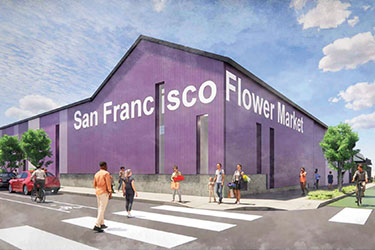 Approved by the Planning Commission in September, the historic San Francisco Flower Mart to move to new 16th Street in Potrero Hill.

Following a contentious multi-year battle, the historic San Francisco Flower Mart is slated for a new home in Potrero Hill. Developer Kilroy Realty’s planned redevelopment of the Flower Mart’s existing location at Sixth and Brannan streets in the South of Market neighborhood for mixed-use office and retail resulted in concerns over traffic impacts for the site, given the market’s reliance on truck deliveries. On September 24, the Planning Commission approved a subsequent plan to relocate the over 100-year-old market to 901 16th Street. The plan calls for the reuse of three existing buildings as well as the construction of a two-story parking garage at the site.

Alexandra Stoelzle, Kilroy Realty’s director of development, expressed excitement about “keeping this iconic institution in San Francisco, and specifically doing so by breathing new life into an existing vacant warehouse in Potrero Hill.”

In addition to allowing for the continuation of Flower Mart operations, the project is also poised to create new jobs. Tim Paulson, SFBCTC secretary-treasurer, said that a commitment for a 100 percent union project had been confirmed.

“We have a firm agreement,” Paulson said. “The Building Trades Council is going to support the Flower Mart getting built every step of the way.”

SFBCTC leadership had submitted one of the many letters of support for the project that was the subject of some local opposition due to certain design features including a purple color scheme exterior and parking garage. The project received unanimous approval by the Planning Commission with the condition that the development team continue to work with the community on some of the design and landscaping features.

“It’s really good solid projects like this that are going to feed into our construction pipeline and give kids from the disadvantaged neighborhoods that are members of CityBuild and trying to get into our trades a place to go to work,” said Planning Commission President Joel Koppel. “It’s going to give them a paycheck to take home.”

Koppel also noted that the Flower Mart’s operations on the site will mark one of the few remaining Production, Distribution and Repair zoning uses in the city. “This is a great opportunity for us to do something more than just approve offices, housing or hotels,” he said.

As part of the project, an existing modular office building will be demolished and two metal shed industrial warehouse buildings and a one-story vacant office building will be repurposed. Construction will include adding a new mezzanine level in one of the sheds as well as a public parking garage offering 150 vehicular spaces and 25 spots for box trucks. The market will have a total of 125,000 square feet of space for storage and wholesale sales. There will also be a new loading dock on Mississippi Street and bicycle parking spaces.

The parking garage will offer short-term parking for the public and spaces for the Flower Mart’s operations. According to Vance Yoshida, president of the Flower Mart’s board of directors, the market is one of the few of its kind remaining in the country and it receives deliveries of flowers from all over the world for distribution in Northern California. Yoshida said that the parking garage helps keep street parking free for other uses in the neighborhood.

“901 16th Street will provide a new home for our 45 vendors who are mostly owner-operated and employ over 300 employees,” said Yoshida. “It is important that the new market provides a home in which our vendors can thrive into the future and at the same time we can add to the vibrancy of the neighborhood.”