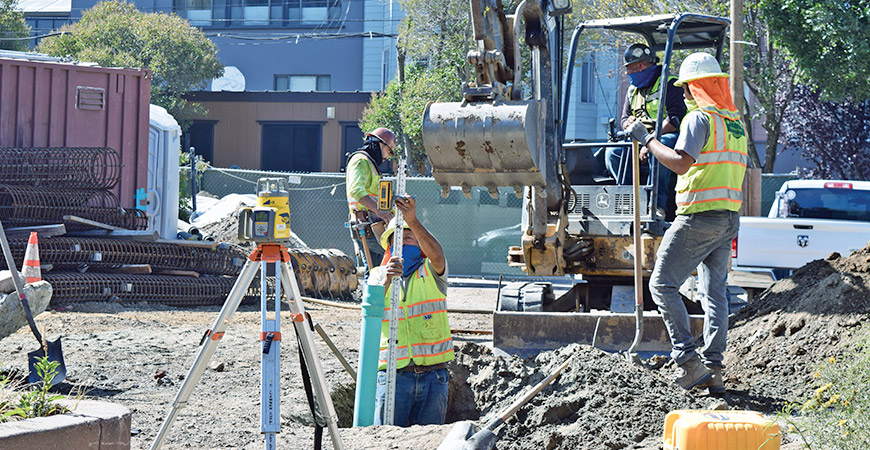 Site improvements and an ‘annex upgrade’ are underway at Tule Elk Park Early Education School, thanks to a bond measure that targets aging school facilities. - PHOTO BY JACOB BOURNE

Tule Elk Park Early Education School (TEP) will be getting an “annex upgrade” and many additional site improvements thanks to a bond measure that targets aging school facilities.

TEP, which has approximately 150 early education, pre-K and kindergarten students, will fund its improvements through the SFUSD Bond Program approved by voters in 2016. The project involves the modernization of the main campus building — known as the annex building — as well as the construction of a new one-story classroom. Arntz Builders is the general contractor for the project and many Building Trades unions are represented.

“Initially we came in and demoed everything except for the structure and the exterior walls,” said Sasha Olshansky, construction manager, AECOM. “Back in December of 2019 we started the actual modernization project.”

When the project is complete, the fully modernized annex building will keep its status as the main building and everything will be new except for the structure. Students will gain four more classrooms from the addition of the new building.

The modernization portion includes equipping the annex building with ADA access, seismic upgrades and fire/life-safety upgrades. Renovation includes the installation of new mechanical, electrical and low-voltage systems as well as new plumbing and fire sprinkler systems, new partitions, windows, doors, casework, and all new finishes both interior and exterior as well as new roofing. The site will gain new fencing and gates, a freestanding canopy structure, site walls and curbs.

“The annex is a historic building built in 1927 and a lot is being preserved,” said Ron Soper, senior project manager, bond project, SFUSD. “There were concerns about the structure because there was a lot of dry rot. In a building like this, there are just a lot of unknowns. Some of those challenges were mitigated early on. If we had just started with a building with a bunch of unknowns there would have been a lot of change orders.”

Olshansky added that the steam system was so old that it had started to deteriorate the wood structure. After a teacher’s leg went through the floor, the school was closed.

Frank Proteau, superintendent for Arntz Builders and a member of the Carpenters Union for 27 years, said that the all-union project entails Carpenters performing the shoring, Laborers bracing for the Carpenters to do the supports, followed by excavating and putting in drilled piers by the Operating Engineers. After that, Carpenters and Laborers will be forming grade beams and stem walls so that the Carpenters can reframe the building. Ironworkers will put in the structural steel columns. Once the shoring is complete, all the trades will be working simultaneously to finish the job.

Soper said that because the school is not scheduled to reopen until fall 2021, not having classes in session while work is going on makes things less challenging. In the interim, TEP students have been relocated to Marina Middle School.