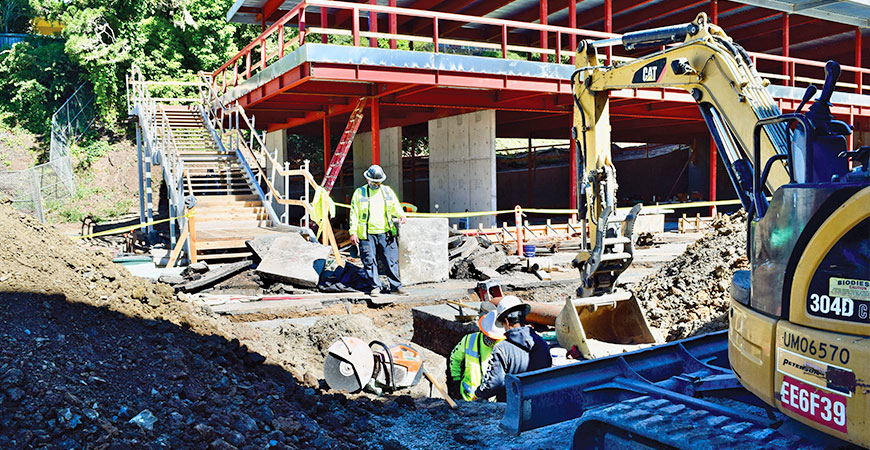 Rodan is the general contractor for the project at Clarendon Alternative Elementary School, which includes workers from several unions.

Clarendon Elementary Gets an Overhaul

By Jacob Bourne, writer and photographer

Thanks to a bond program funded by San Francisco Unified School District, the aging and cramped Clarendon Alternative Elementary School is getting a much-needed facelift.

Clarendon is a kindergarten through fifth grade school within SFUSD. Located in the Twin Peaks neighborhood, the school and its estimated 560 students have increasingly experienced cramped and substandard conditions over the past two decades, necessitating a general school modernization and reconstruction project funded by SFUSD’s Bond Program. Funding for the program was passed by voters in 2016 under Proposition A, which granted more than $744 million to address aging school facilities.

“This is an overcrowded school with 20- to 30-year-old bungalows that are falling apart,” said Kristen Raymond, senior project manager at SFUSD. “We really wanted to replace them and have equitable classrooms for all students, so each and every student would be in a classroom that meets the goals of the District’s Vision 2025.”

The work includes the construction of a new 14,000 square foot building that will include a media center, seven general education classrooms, a music classroom, offices, restrooms and support areas. Construction of the new classroom building will include soil modification, excavation and re-compaction, installation of site retaining walls, site utilities, paving, landscaping and irrigation.

The project will also adding ADA access, seismic upgrades, fire/life safety upgrades, hazardous material removal, and modernization of a new administration area, art classroom and kitchen. The boiler will be replaced and new telecommunications cabling will be installed.

“There were eight to ten portable facilities on the yard that we demolished to make room for this new building, and we had to close services like having a full time library, computer lab, art room and music room to do this,” said Raymond. “Everyone has taken a hit to make this a successful project. It’s a sacrifice they’re willing to make to help make this happen.”

Rodan is the general contractor for the project which includes workers from several unions. Paul Diddle, a Journeyman with the Operating Engineers Local 3 who has been on the job for over three months, said that workers are observing all the COVID-19 safety precautions. He acknowledges that wearing a mask all day can be difficult.

“This job is a little challenging because it’s a small work site and we’ve had to figure out some problems that aren’t in the plans and make it all work,” said Diddle.

Kitchell is the project’s construction manager. According to the company’s senior project manager, Victor Manansala, work was only delayed for about a week due to COVID-19. Once county health directives established safety protocols for job sites, work resumed with a temperature check station, PPE and sanitation procedures in place. The goal is to have the modernization work on existing structures completed by the opening of school this fall, while work on the new structures will continue until its anticipated completion by the end of summer 2021.

“Work on new buildings will continue after school reopens,” said Manansala. “It’s a bit of a challenge to coordinate with PE, recess and lunch. We’ve been working with teachers and staff to accommodate their needs.”