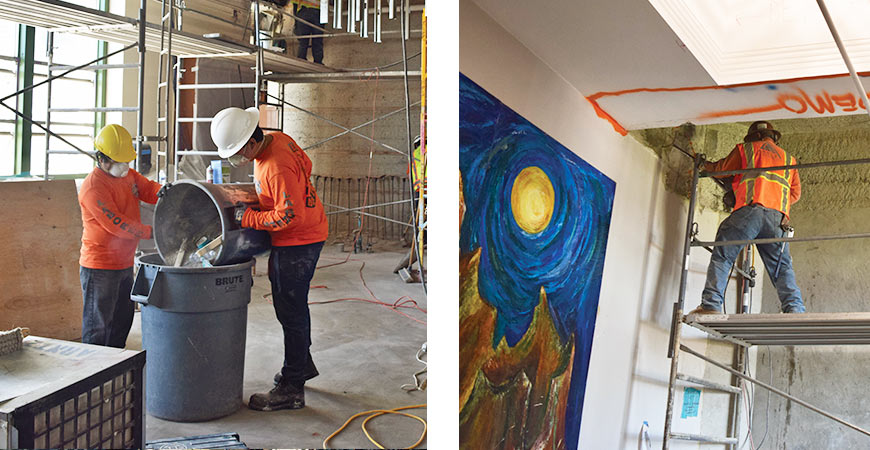 Part of an ongoing series, Organized Labor visits campuses that have received seismic and safety upgrades funded by Prop A bonds.

In 2016 San Francisco voters passed Proposition A issuing general obligation bonds in the amount of $744,250,000 to be used to upgrade San Francisco Unified School District schools. The funds were earmarked to provide seismic safety and modernization to school facilities that are some of the oldest in the state.

In Spring 2019, a major seismic overhaul of George Washington High School brought the Outer Richmond campus up to modern earthquake resiliency standards. Located at 600 32nd Avenue, George Washington is one of San Francisco’s largest schools with just over 2,000 students. Costing between $35 and $40 million, the work spans all floors and wings of the school, from the roof to the crawl space. The core of the project is the addition of sheer wall foundation, which created the opportunity to add other functional and cosmetic upgrades.

“It’s a major seismic upgrade that’s taken a number of years to be able to allocate the funds that were required to accomplish the work,” said Maureen Shelton, director of construction bond programs for SFUSD. “It’s one of the more historic buildings in the school district. So one of the challenges we had during the design process was trying to do the seismic upgrade without affecting the exterior of the building because it’s probably going to be on the National Register of Historic Places, so there’s a lot of scrutiny on changing any of the original character of the building.”

“An assessment was done about three years ago and it was determined that this building needs additional structural strengthening,” added Swaroop Mohanlal, senior construction manager for AECOM which was contracted by the school district to oversee the work.

Mohanlal explained that the project involves much more than the seismic upgrades. New floors, ceilings, skylights, lighting, electrical, plumbing, roofing and a fire alarm system are also part of the scope of the work.

The project and other SFUSD bond-funded modernization projects are covered by a project labor agreement ensuring that all the work is done by union hands. Arntz Builders is the general contractor for the George Washington project that also features crews from Laborers 261, Carpenters Local 22, IBEW 6 and Plumbers & Pipefitters Local 38.

Nick Ivashkevich, Superintendant for Arntz Builders, has been a member of the Carpenters union for 32 years. Ivashkevich said that he and his union brothers and sisters who are working on the project feel fortunate to have steady work during these uncertain times and that SFUSD and AECOM have been strong partners.

“This job is probably more challenging than other $40 million jobs, but it’s being handled,” said Ivashkevich. “With any job that requires all of the trades from demo to paint, and has a tight schedule, there are challenges there and COVID didn’t help. We had to be cognizant of the protocols and guidelines that have to do with COVID. Every day we hold a morning meeting to alleviate any concerns, and that helps.”

The fact that the school had been closed due to COVID-19 helped only moderately with workflow. Although students have been absent, teachers have still been permitted onsite, which has necessitated work scheduling changes and adding nightshifts to minimize interference and safety risks. The site is also being used as a food distribution center on Mondays and Wednesdays. Although the estimated 200 visitors don’t enter the building to pick up the goods on those days, their presence still needs to be monitored for safety amidst the construction.

“Arntz is definitely one of the most conscientious contractors we’ve had on the San Francisco Bond Program,” said Mohanlal. “They’re doing a great job managing this, it’s a very complicated project and the biggest one San Francisco has undertaken on an occupied school.”