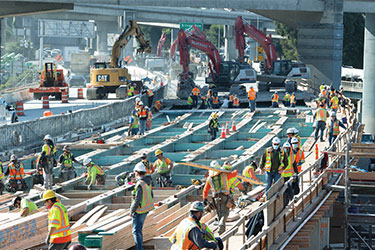 Although the intention of the construction shutdown was to help curb the spread of COVID-19, there was widespread concern that the restrictions placed too high a burden on development and livelihoods, and was ultimately unnecessary given the high level of safety precautions already taken on union jobsites. Paulson had said that the restrictions were made by county officials without the consultation of Building Trades unions and signatory contractors, leading to many union members who had previously been on jobsites considered safe joining the ranks of the unemployed.

In addition to sending a letter that on behalf of the region’s Building Trades Councils to the various county health officials requesting that the construction restrictions be lifted, a coalition of Bay Area Building Trades Councils, general contractors and United Contractors developed a detailed jobsite safety plan that was ultimately adopted by the city and county of San Francisco. SFBCTC President Larry Mazzola, Jr. said that generally outdoor or open areas pose fewer safety risks than confined spaces, and so some sites may reopen sooner than others.

“We’ve been pushing the city and health department to open up in this fashion,” Mazzola, Jr. said. “We’re glad that they finally agreed it was time to do so with the strict safety guidelines that we helped write, making sure that our members are safe. The number one priority is keeping our members safe.”

“We expect that the contractors will have safe jobsites and we will do everything we can to make sure that our members are working in safe conditions,” added Paulson.

Under the updated order, all construction is considered “essential business” but the sites must adhere to specific health protocols, with separate sets of guidelines for small, large and public works projects. Some of the requirements include designating a site-specific COVID-19 supervisor, sealing off work areas in buildings with occupants present, daily screening protocols such as temperature checks and social distancing between workers. If a COVID-19 infection is detected, the site must be decontaminated and the County Health Department notified.

“It’s not a huge stretch to adhere to these new procedures when it comes to COVID-19 because we’re already the best at safety and our contractors are the professionals,” said Mazzola, Jr. “Members will adapt to these new rules and regulations because contractors and general contractors already have these types of measures in place.”

Jobsites are also expected to be supplied with face masks, gloves, goggles, face shields and sanitizer, all of which may be hard to come by because of the widespread shortage of personal protective equipment (PPE). Because of this, several general contractors have advised workers to wear cloth face masks instead of N95s. Last month, the National Building Trades Council donated 500,000 face masks to frontline health care workers around the country.