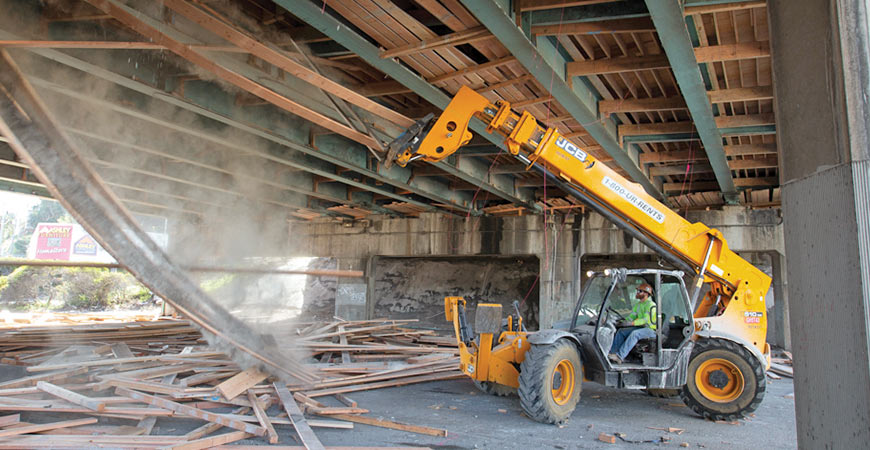 Because of stay-at-home orders, less traffic on local roadways provided an opportunity to move up improvements with less impact. - PHOTO COURTESY CALIFORNIA DEPARTMENT OF TRANSPORTATION

With more than 240,000 vehicles traveling through the U.S. 101 bridge deck at Alemany Boulevard, updates to the corridor that connects the region have long been a top priority. Caltrans had originally planned the work to be done in July and had been busy preparing traffic detours and doing public outreach. Now the unexpected COVID-19 pandemic and ensuing shelter-in-place orders across the Bay Area created unique conditions to get the $37 million project completed ahead of schedule.

“It’s a safe time to do work with things slowed down because there’s no heavy traffic,” said Tim Paulson, San Francisco Building & Construction Trades Council Secretary-Treasurer. “It’s a perfect time to work on transportation and infrastructure.”

Bart Ney, Senior PIO for Caltrans said that because people have been sheltering-in-place, there was a 40 to 60 percent reduction in traffic on that stretch of highway. The traffic slowdown prompted the acceleration of the project schedule, which ultimately commenced on April 24, much earlier than had been expected.

“The freeway and bridge were built in the 1950s and they experience a tremendous amount of traffic as it’s a key artery between San Francisco and Silicon Valley, accounting for a huge part of the economy,” said Ney. “It got to the point where the deck had to be replaced — the 800-foot long bridge itself had to go.”

The project had originally been planned to be executed within an 18-day work schedule, but scheduling was condensed and work wrapped up on May 2 in preparation for a full reopening of the corridor on May 4. General contractor Myers & Sons Construction finished the project in10 days.

“We were able to do it — it has gone very smoothly,” Ney said.

As was the case with other projects deemed essential during San Francisco’s shelter-in-place order, extra safety precautions were taken to keep the jobsite safe from the potential spread of COVID-19. As workers arrived on site, they went through a medical station to have their temperatures taken, and no one with a fever was allowed to work. Face masks were expected to be worn during times when it was deemed safe and appropriate to do so. Cameron Robbins, Journeyman and Business Representative for Local 3 Operating Engineers, said he would don a mask anytime he wasn’t alone inside a vehicle.

“I feel grateful to be working right now,” said Robbins. “Local 3 members are happy to have the work and all the overtime from this project.”

Robbins added that the project went smoothly because all parties involved were able to come together on short notice and work effectively despite the challenging conditions. Local 3 Operating Engineers ran at least three cranes, four excavators, two loaders and several forklifts on the project.

According to Ney, the hardest part of the project was seeing the three months that had previously been allotted to the planning process whittled down to just three weeks. “The preparation to get construction supplies was really intense,” he said. “There weren’t any supply chain issues delaying materials, but it was a big challenge for the contractor.”