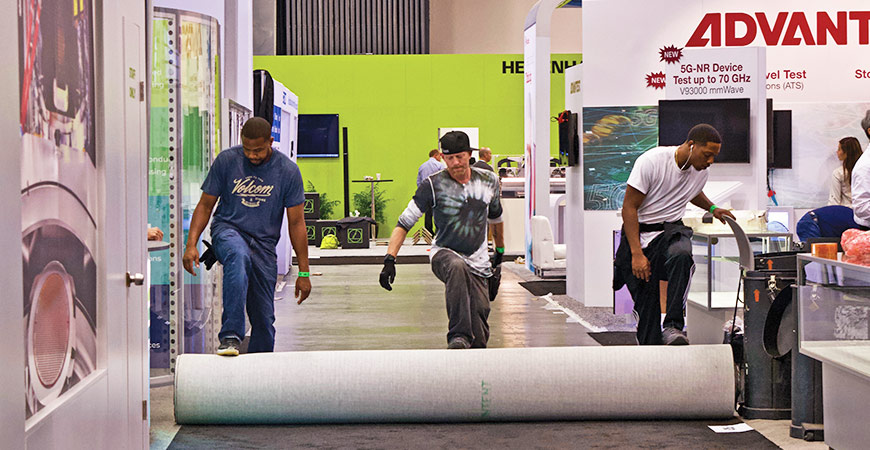 Many industries and trades have faced economic and professional hardships caused by the COVID-19 pandemic. The Local 510 Sign & Display Union first experienced the impact of the health crisis in late February. Trade shows, which generally represent the bread and butter for Local 510 members, have been canceled or postponed because of the risks that large gatherings pose of spreading the virus.

Although the original shelter-in-place order for multiple Bay Area counties went into effect mid-March, trade shows began cancelling in February as exhibitors dropped out. The RSA Conference, a cybersecurity show held February 24-28 at the Moscone Center, was the last major show where Local 510 members worked. Shortly afterwards, events such as Google’s Cloud Next, Game Developers Conference and IBM’s Think 2020 — significant jobs for the union – all canceled.

“There were a number of show associations that acted to cancel shows even as they were still setting up,” said Local 510 Business Representative Morgan Worth. “That took place over a week and a half to two-week period. “[One show] had two attendees who went home to Connecticut and were later diagnosed with the Coronavirus, so our members were understandably concerned about possible exposure in late February.”

Worth said that as shows cancelled, employers started laying off and furloughing workers because there were no jobs for them. Due to continued uncertainty over the duration of the pandemic, Local 510’s largest employer, Freeman Company, opted for a 90-day shutdown with a tentative reopening planned for June.

Nearly all of Local 510 members have either been laid off of furloughed and they are feeling the impact.

“A fair number of our members live hand to mouth,” said Worth. “Many of them are looking to unemployment benefits. Many had claims already open and those that didn’t may have to wait a little longer. This is going to be really hard on our members. Our union is trying to find the best resources for our membership. We’re relying on some measure of help from the labor community.”

In addition to concern about being able to pay rent and bills, a majority of Local 510 members will only have health insurance coverage for two to three months while they are out of work. The union’s medical trust fund is exploring ways to extend those benefits.

“We’ve never seen anything like this so we don’t know what to expect,” Worth said. “We’re keeping members updated by posting resources on our website as they become available and are maintaining contact on a daily basis.”