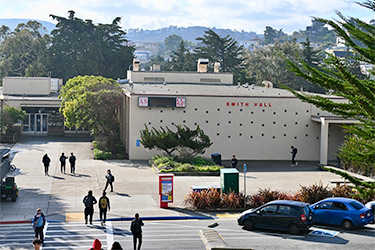 Thanks to Prop A, which passed with 72% of the vote, CCSF will receive $845 million in renovations. The work will be done union. - Photo by Jacob Bourne

Props A, B Pass Comfortably

Results from the March 3 election helped secure crucial work for Building Trades members. Nearly 56 percent of registered San Francisco voters made it to the polls or submitted ballots via mail to throw their support behind a number of propositions and local races, in addition to the Presidential primary and statewide races. While the ballot proposition outcomes were mixed, SFBTC-endorsed candidates won their respective races. Overall, the election should give Building Trades members a firm hold on steady work for several years to come.

One of the most successful outcomes was the passage of Prop A, which will devote $845 million to rebuild and renovate City College campuses. The measure only required 55 percent approval yet garnered 72 percent.

“This is a win-win for the people of San Francisco and for students at City College,” said Tim Paulson, San Francisco Building and Construction Trades Council Secretary-Treasurer. “In addition to providing important educational benefits to students, it will also create hundreds of union construction jobs for our community.”

The funds will be used to modernize CCSF buildings and infrastructure all over the city but especially at the Ocean Avenue campus, which has severely dilapidated structures. Work is slated to begin immediately to construct a new Performing Arts and Education Center, a STEAM Center, Student Success Building and a number of other upgrades to create a functioning environment for students to learn.

Some of CCSF buildings haven’t been renovated for over 50 years and the condition of facilities has become the top issue for current and prospective students. The work will propel City College into the 21st Century and is geared to better serve current students and be more competitive among the region’s other community colleges. Seismic safety upgrades, better energy efficiency, flood damage repair and prevention, accessibility improvements, and updates to dangerous electrical, heating and plumbing conditions will also bolster campus safety and sustainability.

“We are so grateful to the people of San Francisco for passing this Bond, which will allow us to provide students with state-of-the-art learning facilities that will better prepare them for graduation, or joining a 21st century workforce,” said Shanell Williams, President of the City College City of San Francisco Board of Trustees. “It was incredible to see the entire City College of San Francisco community come together to help support this important initiative.”

Following a few months of negotiations, the Building Trades signed a Project Labor Agreement with City College, guaranteeing that all the campus modernization work will be done with union hands.

“Prop A is huge for us,” said Larry Mazzola, Jr., SFBCTC President. “We have a PLA with City College secured, locking down that work.”

Voters overwhelmingly decided to pass Prop B, San Francisco’s Earthquake Safety and Emergency Response Bond with 83 percent in favor. With predictions of the next “Big One” looming over the region, $628.5 million will now go toward increasing the city’s earthquake resiliency and earthquake response infrastructure.

“We are very pleased that Prop B passed,” Paulson said. “It will mean a lot of construction work for us as we move forward in collaboration with the firefighters. We expect that a huge portion will be built by our members.”

The funds will pay for the rebuilding of the city’s water system to fight fires and will be especially necessary to put out several fires simultaneously in the aftermath of a major earthquake. Because San Francisco’s western neighborhoods currently lack a modern firefighting water system, an auxiliary high-pressure system will be constructed. Police stations and fire houses will also get a seismic makeover from the funding.

“We’re going to get a lot of work from Prop B,” said Mazzola, Jr. “That bond will fall under the Citywide PLA once it’s finalized.” He said that there are still two outstanding issues being discussed regarding the Citywide PLA but that he’s “cautiously optimistic” that it will be finalized soon. “A lot hinges on the Citywide PLA,” he said.

All SFBCTC statewide endorsements won their March 3 races. House Speaker Nancy Pelosi won a sweeping victory for her Congressional District 12 seat, blowing away the competition with 74 percent of the vote. District 11 State Senator Scott Wiener kept his seat with 56 percent of the vote. Within the State Assembly races, Phil Ting handily won against his single opponent, John McDonnell in District 19 with 82 percent of the vote, while David Chiu held onto his District 17 position running unopposed.

“All Building Trades race endorsements came though this election and we’re glad that our members made that happen by campaigning and getting out the vote,” Paulson commented. “We need our members to vote in even greater numbers in November.”

A ballot measure that could end up stifling work for Building Trades members passed by 55 percent. Prop E restricts approvals on new office space projects if the city falls short of state-mandated housing creation. Going forward, the amount of new office space green-lighted through the planning process will be reduced by the same percentage as the deficit in new affordable housing. SFBCTC in partnership with the San Francisco Chamber of Commerce had undertaken a “No on E” campaign to spread the word that Prop E could extinguish development across the board because the affordable housing mandate has never been met in the past and is “unrealistic.” Furthermore, because fees paid by developers of office buildings go toward the development of affordable housing, Prop E could be a barrier to increasing the city’s affordable housing supply, and thus contribute to a vicious cycle that results in a continued housing crisis, as well as job losses.

“I think this is irresponsible legislation that will backfire when work slows down,” said Larry Mazzola, Jr., SFBCTC President. “Office buildings are the bread and butter for a lot of our contractors — when things slow down that’s what keeps them afloat. So, in a downturn that’s going to negatively affect the economy in San Francisco even more. The No on E campaign was good but not enough people took it seriously. We did what we could with the money we had to get the word out.”

State-mandated housing goals are based on the Regional Housing Need Allocation assessment, which requires San Francisco to create 28,869 units of affordable housing between 2015 and 2023. San Francisco has never met its yearly target, and in 2018, The Department of Housing and Community Development calculated that 97.6 percent of California cities failed to meet RHNA goals. So at least in theory, a collaborative effort could yield an unprecedented level of affordable housing to keep development afloat, but unfortunately depending on impact fees from new offices is insufficient to make that happen due to Prop E’s restrictions.

Paulson, who said he was unsurprised by Prop E’s passage, also expressed disappointment but thanked everyone who led the effort against it. “We know it will dramatically restrict development in San Francisco,” he said. “The livelihood of our workers and many others depend on that development. We are very disappointed that it passed but glad that the margin wasn’t as big as some were expecting.”

Other local ballot measures, Prop C and Prop D passed with easy margins. Prop C will provide about 25 former employees of the San Francisco Housing Authority with retiree benefits. The measure was needed to prevent those employees from having to restart their retirement benefits accrual due to the transfer of jurisdiction of the housing authority from the Department of Housing and Urban Development to the City and County of San Francisco.

Prop D will stem the trend of chronic vacant storefronts in the city’s struggling commercial districts. The measure imposes an annual tax on commercial store owners who keep their properties vacant for more than six months annually. The tax goes into effect next year.

Although San Franciscans voted in favor of Prop 13 — 75 percent in favor, 25 percent opposed — it failed statewide with 54 percent against, 46 percent in favor, despite it being forecasted to pass. If it had passed, the measure would have authorized $15 billion in state general obligation bonds for construction and modernization of public educational facilities. Some of the projects would have included safety repairs, lead testing and remediation and classroom construction for schools around the state.

While backers of Prop 13 saw a strong need for the funds to implement mold and asbestos removal among other projects, opponents argued that it would be cheaper to draw funds from the regular budget as opposed to borrowing money.