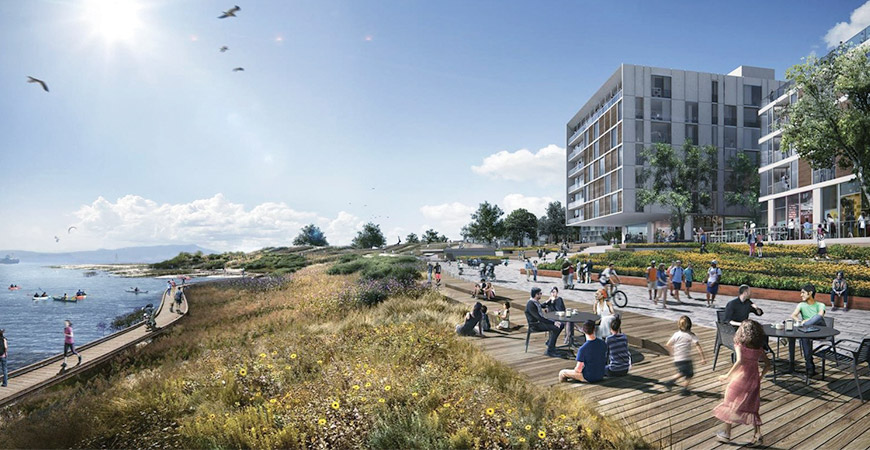 A huge India Basin mixed-use project that was approved in 2018 is moving closer to becoming reality for a 29.26-acre parcel in the Bayview Hunters Point neighborhood. In addition to the 1,575 residential units and 200,000 square feet of commercial space to be developed by BUILD Inc. on private land, there’s a second component led by the Recreation and Parks Department on land owned by the City. The India Basin Waterfront Parks and Trails Project would create a new 1.8-acre public park at 900 Innes Avenue as well as rehabilitate an existing 5.6-acre India Basin Shoreline Park and the India Basin Open Space area, for a total of 10 acres.

“We have a tentative deal with Rec & Park and the City and County for a deal but it’s missing one piece,” said SFBCTC Secretary-Treasurer Tim Paulson. “If the project doesn’t end up falling under the Citywide PLA then there will be a reopening clause for Phase 2 that’s been written by the attorneys. So, it’s a tentative agreement at this point.” Last year the San Francisco Board of Supervisors adopted the Citywide Project Labor Agreement, but they have yet to finalize it.

Once deals are sealed, both the mixed-use component and the parkland project represent a stockpile of work for the trades. Regarding the mixed-use, Paulson said that Building Trades leaders are ready to commence private sector negotiations with BUILD Inc. The developer has issued a letter of intent to pursue a project labor agreement.

At the end of February, Mayor London Breed announced that the state awarded $8.5 million to the India Basin Park project. An additional $25 million donation from the John Pritzker Family Fund and another $4 million from the state budget secured with the efforts of Assemblymember Phil Ting, will go toward the park project.

“With this funding from the state, we are one step closer to a beautiful, waterfront hub for recreation and ecological education in the Bayview,” said Breed. “This project is true environmental justice for residents of the Southeast neighborhoods and will be an incredible place to visit for everyone in San Francisco.”

In addition to being a place where people can enjoy the outdoors, the park project will undergo shoreline tidal marsh and wildlife habitat restoration. The restored areas will feature docks where people can socialize along the waterfront, an accessible walkway and stairs to connect with the greater neighborhood, garden areas, a public plaza, lighted bike and pedestrian pathway linking the Bay Trail, and an ecological education area where the public can view wildlife. Amenities include a food pavilion, cookout terrace, basketball courts, playgrounds, wetland walk and a boathouse. It’s envisioned to give open space access to those living in 2,500 units of public and affordable housing within one mile of the parkland.

“Parks are not a luxury. They’re tangible reflections of the quality of life within a community. I’m thrilled a state and local partnership will result in the transformation of an underserved San Francisco neighborhood and offer its residents what’s available in other parts of the city: a place to connect with others and enjoy public recreation,” said Ting.

The Recreation and Park Department acquired India Basin Park in 2014 with the intention of transforming a post-industrial brownfield into a modern legacy park within a historic waterfront context. The project’s design phase began in 2019 and is expected to continue through this year.