‘Not the Way to Have a College’ 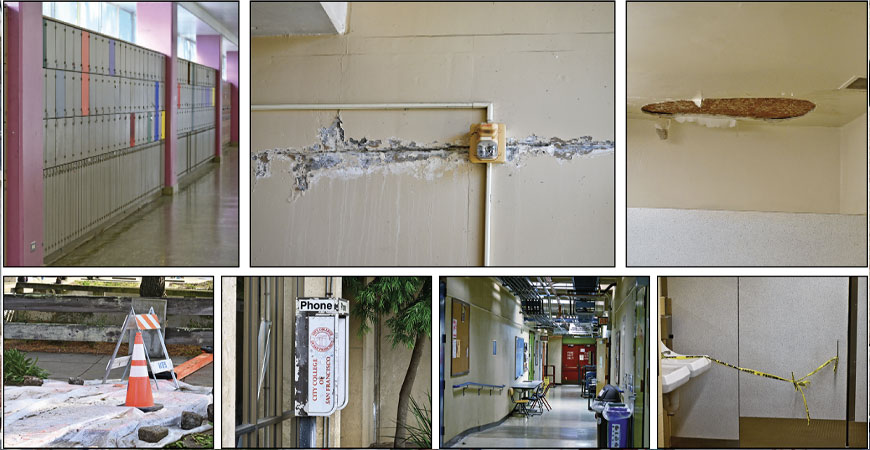 Proposition A is on the March 3 ballot and will provide $845 million to fund extensive City College renovation projects. - Photos by Jacob Bourne

Prop A Would Restore City College with Long Overdue Renovations

On March 3, San Francisco voters will see Proposition A on their ballots added last fall by the City College of San Francisco’s Board of Trustees who are seeking $845 million to fund extensive campus construction and renovation projects. Upon visiting the school’s campuses, the rationale for the request for public funds is clear; many existing campus buildings built from the 1940s through the 1970s, have been worn to a great degree of deterioration.

“These buildings are well past their usable lives,” said James Sohn, Senior Vice Chancellor for Facilities, CCSF on a recent campus tour. “This is not the way to have a college.”

If passed, about 70 percent of Prop A funds would be spent on the Ocean Avenue campus with approximately $50 million going to the Evans Center at 1400 Evans Avenue, where the college plans to hold aircraft maintenance, welding and automotive repair programs. Another $20 million would go to other campuses located in the southeastern quadrant of the city. Campuses on the northern end would undergo minor projects such as bathroom renovations and ADA accessibility projects.

Sohn explained that about half of Ocean Avenue’s buildings are too hot and the other half too cold, which hinders a comfortable learning environment. Older energy systems that are poorly maintained also waste energy resources. “It’s hard to train and retain staff to run these antiquated systems,” he said.

The work would also extend to the campus layout. CCSF’s total square footage citywide is about two million square feet, which wouldn’t change with Prop A improvements. However, what would change is the efficiency of the spaces. For example, a loading dock that receives thousands of deliveries for the Ocean Avenue campus is currently positioned at a cramped intersection right in the midst of students’ path of travel, hindering both operations and student mobility. Overall campus way-finding is poor with narrow streets and parking dispersed in a seemingly random manner.

The new environment would feature upgraded pedestrian paths, dedicated routes for electric bikes and scooters, bike lockers and bike sharing throughout campus, and potentially electric vehicle charging stations. Public transit would be encouraged over car use, and a walking and bike path would connect to the Balboa BART station.

“We polled all our students and asked them what would make them come to City College or not, and the number one reason for not coming was the lack of facilities or condition of facilities,” said Sohn.

In addition to providing students with a proper place to learn, Prop A could create hundreds of union construction jobs. “We negotiated a new Project Labor Agreement with the Building Trades and had a very good amicable, collegial negotiation,” Sohn said.

“City College has always been a priority for the Labor movement,” said Tim Paulson, SFBCTC Secretary-Treasurer. “It’s time for us to take on the necessary and vital work that needs to happen there.”

The American Federation of Teachers and the San Francisco Labor Council have endorsed the passage of Prop A.

The work will entail the renovation and modernization of several campus buildings including the Science Hall and Student Union. A new Police Complex would bring together law enforcement staff who are currently spread out among several offices. A Childcare Center would consolidate three existing childcare areas in one location. The plan would also deliver a new 120,000 square foot Performing Arts and Education Center, a 35,000 square foot Central Utility Plant, a Student Development Center and a 190,000 square foot Science Technology, Engineering, Art and Math Complex.

Yes on Prop B

In a move to bolster San Francisco’s earthquake resilience, an earthquake safety and emergency response measure will be on the election ballot. If passed by a two-thirds majority, $628.5 million would be allotted to for improvements to the city’s emergency response infrastructure including police, fire and 911 call center stations. The funds would also go towards rebuilding the city’s firefighting water system, which could be needed to put out several building fires simultaneously in the wake of a major earthquake. In particular, the funds would pay for an auxiliary high-pressure water system to serve the city’s western neighborhoods that currently lack such emergency fire suppression infrastructure.

Last year the San Francisco Housing Authority experienced financial challenges that resulted in the City taking over jurisdiction of the agency from the Department of Housing and Urban Development. Prop C seeks to ensure that Housing Authority employees can access their retirement medical benefits if they continue to work for the City through another agency despite a lapse in employment. The measure needs a simple majority to pass.

Due to forces such as the proliferation of online shopping and San Francisco’s high rents, there’s been an uptick in the number of vacant storefronts in many neighborhoods in recent years. Prop D is an attempt to remove the shutters by instituting a tax on property owners who have vacant storefronts at the ground floor level of buildings for more than 182 days in certain commercial areas. Prop D requires a two-thirds majority for passage.