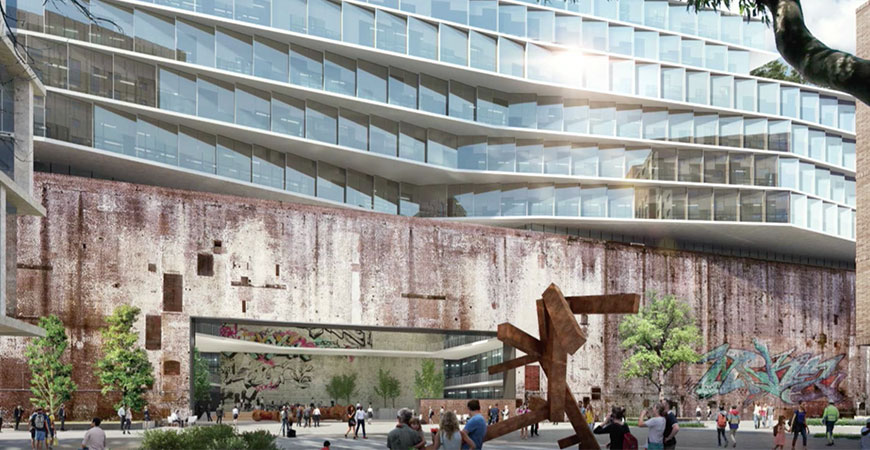 At full buildout, the Potrero Power Plant Redevelopment will be an active neighborhood with diverse uses and fully connected within and to the surrounding area.

Thousands of Housing Units, Jobs in the Works

The latest major development proposal for San Francisco’s Southern Bayfront was approved unanimously by the Planning Commission on January 30. The Potrero Power Station project by developer Associate Capital, is situated on a 29-acre parcel just south of Pier 70 and is one of several projects between Mission Rock and Candlestick Point that could in total add 20,000 new housing units and 38,000 jobs in the years ahead.

“This project …. represents a milestone in planning for a lot more housing in addition to community benefits, affordable housing and open space.”

— Ken Rich, Director of Development for the Mayor’s Office of Economic and Workforce Development

“This project is the last of the major development agreements for large projects along this part of San Francisco’s waterfront and really represents a milestone in planning for a lot more housing in addition to community benefits, affordable housing and open space,” said Ken Rich, Director of Development for the Mayor’s Office of Economic and Workforce Development.

From its heavily industrial past moving toward a mixed-used future, the Potrero Power Station’s estimated 2,600 residential units includes 30 percent below market rate units set aside in each phase of the project, as well as 18 to 36 units for participants of the Homeless Prenatal Program. A robust repertoire of workforce development benefits offered are prevailing wages and First Source Hiring Agreement for all construction work, targets set for hiring Local Business Enterprises, a job readiness training fund, and a tailored engagement program for tech and biotech employees. Jacob Adiarte, Assistant Director at Northern California Carpenters Regional Council, had voiced support for the project at the meeting saying that the affordable housing creation is of tremendous importance to members of the Carpenters Local 22 in San Francisco.

“We met early on with this developer to make sure that Labor is well represented on this project and they agreed to use a union general contractor to ensure union representation,” said Adiarte. “They also intend to execute a project labor agreement with the Building Trades to make sure that not only Carpenters but the rest of the trades will have representation on this project.”

Enrique Landa, Partner at Associate Capital, intends the project to weave the unused 29 acres into the fabric of the rest of the city. He said that the development team held 167 outreach events and moved their office into Dogpatch to be better connected to the neighborhood.

“We heard a resounding need for housing,” Landa said. “We heard the need for inclusionary housing and are proud to have a project that equals the 30 percent affordable housing that public-private ventures have done but without public funding.”

The most iconic aspect of the site is the 300-foot smokestack that harkens to a bygone era when several fossil fuel power plants operated in the city. The stack along with several other historical structures on the site will be retained and used for a hotel that’s aimed at achieving net-zero energy status.

The site’s 29-acres is divided into five areas due to different ownership. The main 21-acre portion is owned by Associate Capital, a 4.8-acre area is controlled by PG&E, 2.9 acres is Port of San Francisco property and a 0.2-acre triangular piece is City-owned. At full buildout it’s envisioned that the area will become an active neighborhood with diverse uses and fully connected within and to the surrounding area via multi-modal transportation, acting as a destination for the wider community.

The Proposal next moves to the Board of Supervisors.