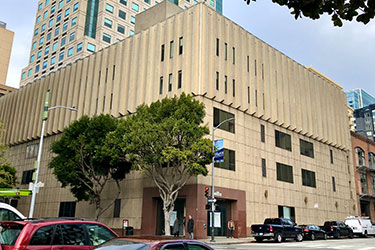 A five-story building at 95 Hawthorne Street that’s been vacant is up for demolition to be replaced by a new 42-story mixed-use residential development at the corner of Hawthorne and Folsom streets within the Transit Center District Plan Area. - Photo by Jacob Bourne

A five-story building at 95 Hawthorne Street that’s been vacant is up for demolition to be replaced by a new 42-story mixed-use residential development at the corner of Hawthorne and Folsom streets within the Transit Center District Plan Area. The property, which was the site of the San Francisco Passport Agency office, is now owned by John Hancock Financial Services that’s building the 444-foot structure to add 392 units to the city’s housing stock as well as 3,500 square feet of ground floor retail.

The project was unanimously approved in September following a several month delay due to concerns by residents regarding potential shadows cast by the tower on nearby Guy Place Park. A shadow study was conducted by the Recreation and Park Commission and concluded that the project wouldn’t have an adverse impact on the park.

Trammell Crow Residential had originally been the project’s developer and had initially proposed a building with 32 stories reaching 320 feet, however the company took advantage of the state’s density bonus law to increase the size and number of housing units. TCR is no longer involved with the project that was designed by architects Skidmore, Owings & Merrill. Turner Construction is the general contractor.

According to Stan Smith, Business Manager for the Sprinklerfitters 483, Mark Sheytanian, Divisional Vice President and National Practice Lead at John Hancock, has been instrumental in commencing discussions around a project labor agreement for construction of the tower. Local 483 has a preexisting relationship with John Hancock through a Defined Contribution Pension Plan and a portion of the funds to purchase the property was from union pension monies.

“I had reached out to Mark Sheytanian and explained that we were interested in this job,” said Smith. “He made a few phone calls and shortly thereafter we had a letter from John Hancock saying that this will be a union job.”

“This will create a lot of jobs for all the trades,” Smith continued. “I anticipate that this will be a 100 percent union project based on conversations that have already happened.” The property still features the vacant five-story building as demolition hasn’t yet begun. Smith said that construction could start as early as late 2020 or 2021, however according to Planning Department staff, the project hasn’t yet secured building permits.

Tim Paulson, SFBCTC Secretary-Treasurer said that the Sprinklerfitters were very helpful in getting the Building Trades to the PLA negotiating table and that the union pension money helped jump start the project. “We’re going to get negotiations started with Turner Construction by the end of the month,” Paulson said.

Of the project’s 392 units, 199 are one-bedroom units, 144 are two-bedrooms and 49 three bedrooms. There are no studios and 49 percent are geared to be sized for families. An architect with SOM said that all of the units are above average in terms of square footage compared to other multi-family dwellings in San Francisco. The design is envisioned to liven the surrounding area, which is marked by a mix of uses. The ground floor will have a tall lobby with a facade of mostly transparent glass to help engage with the public sphere. Building amenities include gym and yoga spaces, green balconies, a sixth floor terrace and green roof garden.

Within a below-grade garage, a total of 107 off-street parking spaces will be supplied for residents of the tower along with four carshare spaces and 208 bike parking spaces. Three freight loading spaces will also be available. The project is just one of several ones within the Transit Center District Plan Area, which is aimed at concentrating growth near to the city’s most robust public transit. The new developments will bolster revenue for the Transit Center District and fund infrastructure improvements to the area. The project is within walking distance of the Transbay Transit Center.