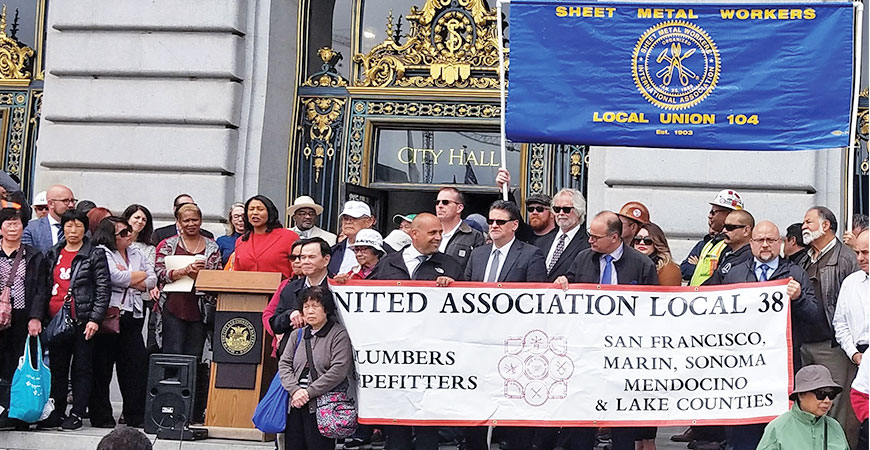 A number of the San Francisco Building and Construction Trades Council’s endorsements fared well on election day, which should bode well for the future of key issues like the creation of affordable housing, workers’ rights and improvements in public education—issues at the heart of Labor’s fight for working people and their families.

Mayor London Breed easily won her bid for a full term in office over five challengers. Breed received 60 percent of the votes on election day and declared victory shortly after the polls closed. “Thank you for honoring me with four more years as mayor,” she told supporters, “I grew up in this city and in poverty and I never thought that in my life that I would have the opportunity to serve in this capacity.”

The SFBCTC endorsed Mayor Breed. “She has fulfilled her promises to us by supporting rights for all workers and steering the historic Project Labor Agreement which will guarantee the highest standards of wages, benefits and training for all San Francisco workers whether union or non-union,” said Larry Mazzola, Jr, President of the Building Trades Council. Mayor Breed signed legislation in January mandating the City to enter into a citywide Project Labor Agreement with the San Francisco Building Trades Council for Public Work or improvement projects. She co-sponsored the citywide PLA legislation as a member of the Board of Supervisors, and said she would make it a priority if elected Mayor.

Mayor Breed also put forward a $600 million municipal bond to fund affordable housing development, Prop A, which voters passed by a 70 to 30 percent margin. The Bond will fund construction and rehabilitation of 2,000 units of affordable housing over the next four years, expand the pipeline for new housing projects—including 100 percent affordable supportive housing projects that benefit formerly homeless individuals, veterans, seniors, and families.

While the projects will not specifically be covered by the citywide project labor agreement between the City and the Building Trades, the SFBCTC won assurances from the Mayor that building trades workers will be well represented on the projects. Work on the 2015 housing bond “was done with 98 percent union building trades workers, and the goal is that this bond will be no different,” Mazzola said. The City also agreed to include the State’s language on a “skilled and trained workforce” that ensures union apprentices will be employed on the projects. The projects are expected to generate hundreds of construction jobs over the next four years.

The housing bond sets aside $150 million to repair and rebuild distressed public housing—including at Potrero Hill and Sunnydale that will result in 550 rehabbed units, 415 newly built units, and $220 million to complete the construction, acquisition and rehabilitation of permanently affordable, shovel-ready rental projects that will begin construction within four years. These projects would serve individuals and families earning from zero to 80 percent of the Area Median Income (AMI).

Additionally, approximately $30 million would go towards acquisition and rehabilitation of rental housing at risk of losing affordability, to help low- to middle-income households earning between 30 and 120 percent of AMI stay in their affordable apartments. Another $20 million would fund the creation of new affordable housing opportunities for households earning between 80 and 175 percent of AMI, as well as educators with down payment assistance loans, and the purchase of building or lands for new affordable construction.

In District 5, results were still not official November 11, but after mail-in and provisional votes were counted and three rounds of ranked choice tabulations, tenants’ rights activist and progressive Dean Preston led Supervisor Vallie Brown by 170 votes. Brown, a neighborhood activist and District 5 Legislative Aide appointed by Mayor Breed to the Board of Supervisors,received more first place votes on Election Day and led by a margin of only 18 votes before second place votes from two other candidates were transferred. Preston, who ran a close race against then District 5 Supervisor London Breed in 2015, declared victory November 10.

On his campaign website, Preston said his priorities include “a Green New Deal for San Francisco starting with clean public power instead of PG&E,” and “a San Francisco Public Bank that can divest our tax dollars from global corporations and invest locally in affordable housing, low-cost loans for first-time homeowners and small business, and help pay off student and medical debt.” Preston said he wants to “funnel our innovation towards affordable living for families, efficient and speedy transit, protection for our small businesses, and decisive steps to protect our democratic process from being overwhelmed by corporate interests.”

In the race for District Attorney, the building trades council’s candidate, Suzy Loftus lost to Chesa Boudin. An attorney in the San Francisco Public Defenders Office, Boudin led Loftus by 8,865 votes as of November 10.

As a San Francisco Deputy Public Defender, Boudin handled hundreds of felony cases and said his experience gave him “a direct understanding of what it takes to reduce our staggering recidivism rates and redirect those arrested towards school and employment.” Boudin said he will work to “improve public safety by fundamentally reforming our broken criminal justice system that is devastatingly expensive, inefficient, unjust and inhumane. It’s broken because more than two-thirds of people who are arrested and prosecuted come back into the system within a few years.”

Boudin’s real-life experience and message of reforming an unfair cash bail system, protecting immigrants from deportation, and establishing a pretrial release program that would allow defendants to keep their jobs and housing while awaiting trial, resonated with voters more than a series of attack ads that claimed his positions were too radical and dangerous.

“I think people understand that the massive amount of money we’re spending on punishment is not making us safer and is really destroying our collective humanity in ways that are profound and far-reaching and deep seated,” Boudin said. “It sends a pretty loud and clear message that the war on drugs and the tough-on-crime policies and rhetoric of the 1990s and early 2000s are on their way out.”

Mayor Breed’s appointment of Loftus as Acting District Attorney to replace another acting DA after District Attorney George Gascón resigned, became an issue in the contest as her opponents claimed it gave Loftus an unfair advantage as an incumbent. Loftus scoffed at the notion and pointed out that voters were more concerned about public safety than the politics of her appointment.

Loftus congratulated Boudin and pledged cooperation with her onetime opponent.

“I didn’t win the race, but we won the support of so many San Franciscans who are demanding that our city work more effectively together to build safety,” Loftus said.

Endorsed candidate Jenny Lam won her bid for a full term on the San Francisco Board of Education with 73.65 percent of the vote in a three-way contest. Lam is a former Director of Programs at Chinese for Affirmative Action. She said her priorities include establishing community schools with more access to counselors, nurses and social workers so students and families get the support they need; increasing before and after school programs; and developing a youth mentorship program for career exploration and service learning.

The SFBCTC did not take a position on the other five ballot measures.

Proposition B was passed with 77.69 percent of the vote. The measure will change the name of the city’s Aging and Adult Services department and commission to Disability and Aging Services and require one member of the seven-member commission to be over 60 years old, one member to be disabled, and one member to have served in the U. S. military.

Proposition C was soundly rejected with 81.8 percent voting against the initiative put forward by e-cigarette manufacturer Juul that would have overturned San Francisco’s ban on sales of e-cigarette products used for “vaping.”

Proposition D received 67.31 percent of the vote, slightly more than the two-thirds supermajority needed to pass the measure. With some ballots still uncounted, results were not official as of November 8. Prop D would impose a tax on ride-share companies, such as Uber and Lyft, with revenue to be used to improve and maintain Muni services and improve pedestrian and bicycle infrastructure.

Proposition E passed with 75.22 percent of voters in favor. The measure will allow residential development consisting of 100 percent affordable housing or educator housing on public zoning districts, reduce the zoning requirements and restrictions for such projects, and require expedited reviews.

The City’s department of Elections reported that voter turnout was just over 41 percent.