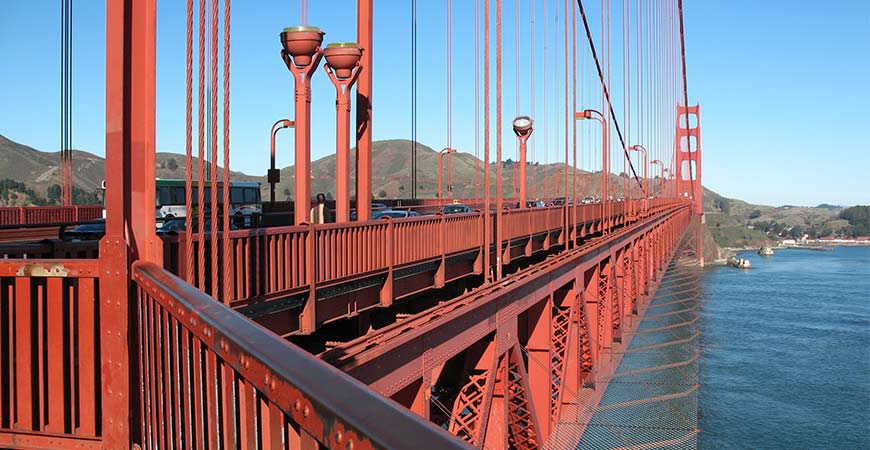 The planned netting to be installed below the Golden Gate Bridge is expected to save numerous lives, as the bridge has seen more than 1,600 suicide attempts since it opened in 1937. - Image Courtesy Golden Gate Bridge, Highway and Transportation District

The Golden Gate Bridge stands as an iconic, picture-ready architectural structure that remains world renown for many reasons. One stat that is not so tourist-friendly is that it draws no small number of suicide attempts on a fairly regular basis.

There have been more than 1,600 suicide attempts since the bridge opened in 1937, a number far higher than any other bridge in the U.S., prompting activists to call for significant preventative action.

The Golden Gate Bridge Board of Directors took a major step towards that action in June when it approved a $76 million net to be constructed to dissuade or, if necessary, catch such jumpers.

Golden Gate Bridge, Highway and Transportation District General Manager Denis Mulligan said the net will be made of a marine-grade stainless steel wire rope that will span both the east and west sidewalks of the bridge for a total of 3.4 miles of netting.

Cost of net to dissuade or catch potential jumpers

“The net is located 20 feet below the sidewalk and will extend out horizontally 20 feet.” Mulligan said, “It will be supported by a series of steel struts which are basically tubes that are hot-dipped galvanized and are painted International Orange, occurring at 50-foot intervals. Because it will block the existing rolling scaffolds used by our maintenance forces, it will require a replacement of the rolling scaffolds on the suspension part of the bridge.”

While the basic idea of constructing a net is to catch a person, it has been shown that they prevent most people from attempting to jump at all. However, if someone were to jump into the net, the process of retrieval would be the next step, something that has not been entirely worked out yet, according to Mulligan.

“Preliminarily we came up with a concept that would work involving a snooper truck,” he said. “It’s kind of like a cherry picker truck but with an articulated arm that can go out and underneath the bridge for inspection purposes, but we’re reevaluating that and we’ll probably use a different method. For the areas of the bridge where we’ll have the rolling scaffolds we’ll probably use those to access people, but we’ll be working with the emergency responder community to come up with a better solution. And we’ll be reaching out to folks like in Ithaca, New York, where they have similar nets and find out what systems they have in place.”

Bridge District Chief Engineer Ewa Bauer is responsible for all capital improvement projects in her district and will oversee the suicide deterrent project. She made it very clear that if anyone were to jump into the net, the catch would not be a welcoming, soft one.

“It’s not like a circus net, made to catch a performer,” she said. “The steel net will be tensioned because that’s the only way it can function under the windy conditions. This is not something anybody wants to jump into because it will be extremely painful.”

After running wind tunnel analysis, it was decided wind retrofits will have to be done on the west side of the bridge, including a replacement of the sidewalk railing.

“The suspension bridge is susceptible to strong sustained winds from the west,” Bauer said. “Therefore, as part of the suicide deterrent project construction we will include the so-called wind retrofit.”

At this point it is unclear as to who will get the contract to build the net, but Mulligan said he welcomes union bids on the project.

Ironworkers Local 377 has a long history with the bridge. Their workers were a part of the original construction, still maintain the bridge and are often on the frontlines in encountering people looking to jump. At their mention, Mulligan said they are a “great local.”

Mulligan said the contract will be awarded next year and are currently in the process of finalizing the bid package. After the contract is awarded in 2015, it will take three to three and a half years to build.

At a cost of $76 million, the funding for the project will come from a number of sources. The federal bridge program will provide $22 million, administered by Caltrans; $27 million will come from federal surface transportation funds, administered by the Metropolitan Transportation Commission; $7 million of State mental health funds, commonly referred to as Prop 63 funds; and $20 million of bridge reserves. The Golden Gate board approved the funding plan on June 27.

Installing a net sounds like a fairly simple task to the layman, but as Mulligan points out, this is a big, complicated project. And one that will save lives.

“It’s a large project,” Mulligan said. “I think people, when they hear about a suicide net on the Golden Gate Bridge they don’t realize the scale of it. So it’s a significant undertaking. Over the side of the bridge down 20 feet below the roadway, the contractor’s going to be removing the paint system. They won’t be able to have any of that paint escape out into the environment. And they’ll attach these large struts that will extend out over 20 feet and they’ll be doing that repetitively, non-stop along both sides of the bridge and then string up those nets. So it’s a large undertaking.”