Residential Project in SoMa Gets the Green Light 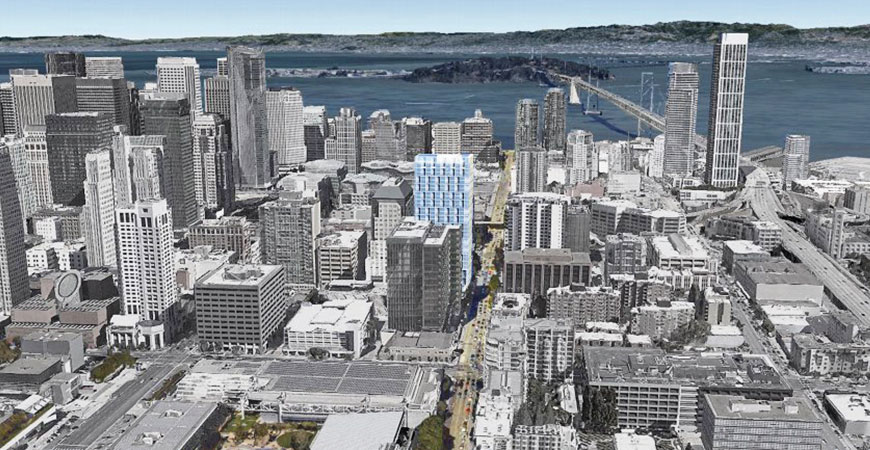 The San Francisco Planning Commission approved plans for a 42-story, 392-unit residential tower at 95 Hawthorne Street in September. Developer Trammell Crow Residential had first proposed the project at the corner of Folsom and Hawthorne in the Transbay Transit District in 2016. At the Planning Commission’s June 27 meeting, commissioners voted to delay approval until the developer addressed concerns of neighbors about shadows cast on a nearby park. A shadow study was conducted for the project by the city’s Recreation and Park Commission, which determined the proposed structure would not adversely affect use of nearby Guy Place Park.

The latest version of the project will have 352,781 square feet of residential space in a 444-foot tall apartment building designed by architects Skidmore, Owings & Merrill (SOM). It will include a mix of 199 one-bedroom units, 144 two-bedroom units, and 49 three-bedrooms, with 55 dwelling units offered as affordable below market rate rentals. It will also include 3,500 square feet of retail space on the ground floor.

At the September 19 meeting, Laborers Local 261 Field Representative Jesus Villalobos urged the commission to approve the project. He said the developer had agreed to build the tower using 100 percent union labor. “Union labor provides good wages and benefits that allow our members and their families to survive in the San Francisco Bay Area,” Villalobos said. “There is a significant job-housing imbalance in the South of Market neighborhood. Because so many jobs are in high paying tech positions, the housing crunch is driving out our members and longtime residents. 95 Hawthorne provides 19 percent effective affordable housing and contributes $50 million in Mello-Roos fees, which will fund many other union construction jobs in the transit district.” He noted that the residential project will replace a vacant office building and not displace any residents.

“The project will provide a lot of good union wage jobs for our members and provide a lot more housing for San Francisco, so workers can stay in the city,” said Operating Engineers Local 3 Business Representative Armie Morgan. “Keep the progress going and keep people working.” Members of Carpenters Local 22 also attended the meeting and urged the commission to approve the project that will help keep Carpenters employed and earning good wages and benefits.

Commissioner Joel Koppel said he supported the project, calling it a good-looking transit-oriented development, with high density. Koppel thanked the developers for “making a good project for the community.”

The four members of the Planning Commission present voted unanimously to approve the project.

Union contractor Turner Construction will be the general contractor for the project. Information on when the project will break ground was not available as Organized Labor went to press.

Dallas-based Trammell Crow Residential is also developing a 185-unit project at 975 Bryant Street and a 243-unit apartment project at 2330 Webster in Oakland.