Terms of a Citywide Project Labor Agreement Coming Along Slowly 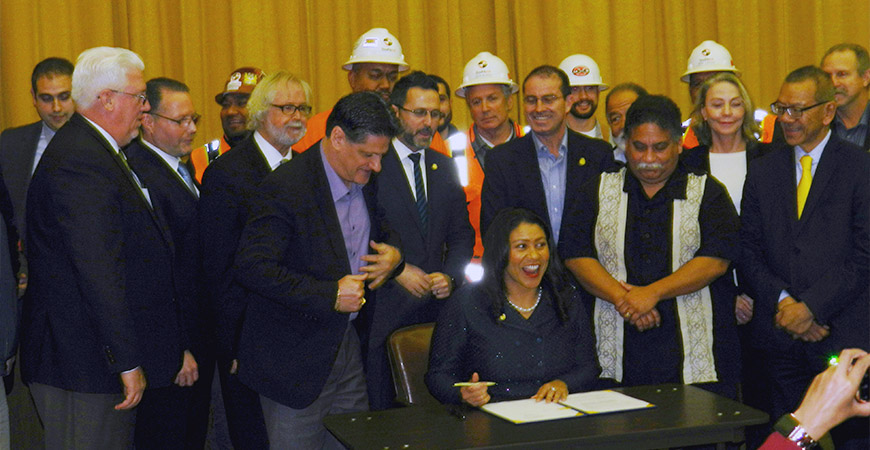 In this file photo from January 2019, Building Trades Representatives, Supervisors and many union members attended Mayor London Breed’s signing of the Citywide PLA ordinance. The negotiation period for terms of the ordinance has been extended to December 1.

Representatives of the San Francisco Building and Construction Trades Council (SFBCTC) are continuing to negotiate with the City of San Francisco to reach an agreement on the terms of a Citywide Project Labor Agreement for public works projects. The San Francisco Board of Supervisors passed an ordinance in January requiring the City Administrator to negotiate with the relevant trade councils, craft and labor unions, and sign a PLA on behalf of the City by September 1, 2019. The ordinance allows for a one-time extension of 90 days in the event a deal could not be reached by September 1; City Manager Naomi Kelly extended the deadline to December 1.

SFBCTC President Larry Mazzola, Jr. said while the negotiations have been challenging, “Both sides want to reach an agreement and are negotiating in good faith.” While City representatives pore over every paragraph to work out the details of the agreement, Mazzola said the building trades negotiators point to language in existing PLAs that can be used in the citywide PLA. “We have successful PLAs for projects with the San Francisco Public Utilities Commission for the Water System Improvement Project, the San Francisco Unified School District for their modernization projects, and many others,” Mazzola said. “We can use and build on language from those effective PLAs for the citywide PLA.”

Mazzola pointed out that in the two years before the Board of Supervisors passed the PLA ordinance, the SFBCTC “moved considerably to address the concerns of Local Business Enterprises (LBE), including the threshold.” The original proposal called for amending the Administrative Code “to require a citywide project labor agreement applicable to certain public work or improvement projects with projected costs over $1,000,000 or where delay in completing the project may interrupt or delay services or use of facilities that are important to the City’s essential operations or infrastructure.” The legislation was amended so that LBEs and minority-owned businesses will not be required to work under terms of the PLA unless the total costs of projects they work on reaches $5 million.

Initially introduced by then-Supervisor Mark Farrell in February 2017, the PLA legislation was amended and revised over the course of almost two years of negotiations between labor and City management, and several Board meetings. Farrell said the goal of his “first-of-its kind citywide workforce policy” was to guarantee highly skilled labor on City public works projects, increase employment among local residents and veterans, disallow work disruptions and stoppages, and reduce overall public works project costs and delivery. The citywide PLA will cover construction and remodeling of City buildings—including fire and police stations, libraries, hospitals and other infrastructure. It will enable the City to avoid costly delays and additional expenses associated with public works and improvement projects that involve numerous contractors and employees in different trades, have critical timelines for completion, and require a skilled and properly trained workforce to successfully complete the work in a timely manner.

“Any contractor who bids on projects for the Department of Public Works, Parks and Recreation, and other city agencies will have to work under the terms of collective bargaining agreements of various trade unions,” said San Francisco Building Trades Council Secretary-Treasurer Tim Paulson. “That will ensure that workers are paid union wages and qualify for the health care and pension benefits union members receive.”

Paulson said reaching an agreement has been challenging in part because the department heads for Public Works and Parks and Recreation, as well as the City Manager, who opposed the citywide PLA initially, are still throwing up carve outs and road blocks in their proposals for the final document.

While the ordinance (passed in January) supports a citywide PLA, it only serves as a framework; issues like the number of core employees a contractor can use before going through union hiring halls for workers, are to be worked out before the December 1 deadline. Other details to be negotiated and finalized include the percentages of apprentices and local hires, and the make-up of any labor-management oversight committee to deal with issues and potential disputes.