Local Hire for Sewer Project: An Investment in People 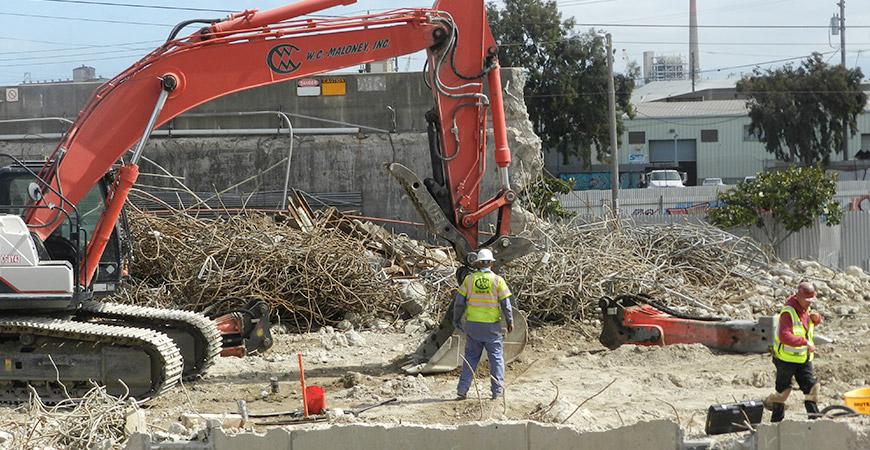 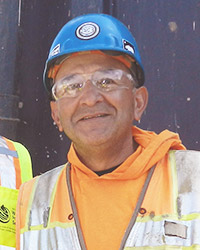 “I worked in IT but got laid off. The work was not steady. I’m coming to the trades at an age when many people are retiring. Unions don’t discriminate against older workers.”

The San Francisco Public Utilities Commission’s (SFPUC) efforts to recruit and train local workers for its Sewer System Improvement Program (SSIP) projects has gotten results, with several Bayview residents earning good union wages and benefits on the major renovation of the City’s Southeast Water Treatment Plant. The SSIP work is covered by a Project Labor Agreement (PLA) with the San Francisco Building and Construction Trades Council that builds on the successful PLA for the SFPUC’s Water System Improvement Program (WSIP) that began in 2007. Replacement of the Headworks Facility, where the flow of untreated wastewater enters the Southeast Treatment Plant, is currently underway. The facility near Third and Evans streets in the Bayview District treats 57 million gallons of wastewater per day and up to 250 million gallons per day during rainstorms. Work there also includes substantial upgrades to wastewater treatment tanks, structural and seismic retrofits, new oxygen plant and influent pumps, odor control improvements, and architectural and landscape improvements.

While the unemployment rate in San Francisco is low, there are still neighborhoods where residents are not benefiting from the ongoing construction boom. “SFPUC has a deep responsibility to the local communities we serve as we make multi-billion-dollar investments in critical capital projects, such as SSIP,” said Masood Ordikhani, Director of Workforce and Economic Programs at SFPUC. “I am extremely proud of our partnerships with the Building and Construction Trades, the CityBuild Program, and local community-based organizations to provide Union careers with prevailing wages and benefits for our local workers, particularly long-term San Francisco residents who have historically been economically marginalized.”

The SFPUC has worked with CityBuild and community service providers to identify workers and do targeted outreach to bring in qualified individuals from the neighborhoods near its facility. The agency is working with the Joint Venture, formed by contractors Sundt and Walsh that serves as the Construction Manager/General Contractor for the Headworks replacement project, along with subcontractors, community-based organizations, CityBuild and labor unions in an “intentional targeting of local hiring.” The partnership identifies and trains new workers, particularly those from communities where the work resides, to be ready for the specific challenges of the job. There are opportunities in multiple crafts on the SSIP projects, with lots of work for laborers, operators, electricians, carpenters, pipefitters, painters and others. 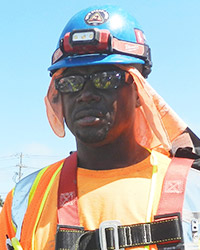 “I’ve always liked working with my hands and had done some carpentry work before. I was excited to get into the laborers because as a general laborer on the project, you stay busy and have to know a little of everything,”

“Work is consistent and earning union benefits is a plus. It’s a great experience, and I’m learning a lot. My friends see me working and want to get in.”

Several CityBuild graduates are currently employed at the Headworks Facility. Organized Labor visited the job site in August and spoke with three of the local hires.

David George is a second-period apprentice member of Laborers’ Local 261 working for Shimmick, the prime subcontractor for the demolition work on the old Headworks. A CityBuild graduate, George started at the Headworks project November 2018. The 37-year old father of three was born and raised in Bayview, about one mile from the SE facility.

George said he had worked as a driver for Amazon and wanted to work closer to home. Local community provider, Bayview Hunters Point YCMA, who employs case managers and job counselors, referred him to CityBuild. “I’ve always liked working with my hands and had done some carpentry work before. I was excited to get into the laborers because as a general laborer on the project, you stay busy and have to know a little of everything,” he said. The SFPUC worked with the contractor and the union to help get George an opportunity on the project. Brian Thomas, a liaison with the SFPUC gives credit to Dave Epps, from contractor Western Water, for giving George a lot of pointers when George worked for the contractor and helped him to get more certifications in pipeline work.

“Work is consistent and earning union benefits is a plus,” George said. “It’s a great experience, and I’m learning a lot. My friends see me working and want to get in.” George said he had three friends whose lives were on the streets who are now working and supporting families. “They turned their lives around,” he said.

Tom Kral with Sundt/Walsh said George has “a fantastic work ethic. He was one of the early hires when pre-construction work started, and he hasn’t missed a day. We meet every Monday to review the previous week’s work and safety on the job, and recognize a worker who went beyond the call of duty. David has been recognized three times for going above and beyond; he is always busy, never taking time off.”

George said the biggest challenge is doing more physical work after years of working as a driver. “You have to be dedicated,” he said. “It’s hard work, but anybody can do it” — though others may not be as dedicated as George, who said he keeps in shape by getting up at 4 a.m. and going to a gym to work out.

Terry Venegas, who grew up two blocks from SE facility, also works for Shimmick as an equipment operator. The second stage apprentice member of Operating Engineers’ Local 3 started work at the Headworks Facility in December 2018. He works on excavation, driving skip loaders and a bobcat all-terrain forklift. 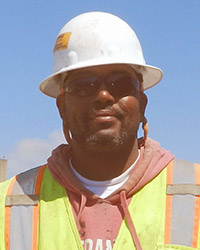 “[This] changed my life — not just in terms of earning good money but the pride I feel in the work I do. Working on a big project like this is challenging. My son sees I work hard, my friends and family are happy for me; there are lots of positive things happening now.”

The 57-year-old said, “I worked in IT but got laid off. The work was not steady.” He was accepted into CityBuild, and graduated Class number 25. “I’m coming to the trades at an age when many people are retiring,” he said. “Unions don’t discriminate against older workers.” Venegas said he enjoys learning and getting training at OE3 center in Rancho Murieta, upgrading his skills with two weeks of training every year.

Drummond Payne is a Laborers’ Local 261 apprentice working for Marinship. He said he heard about CityBuild through a friend and was referred to the pre-apprenticeship program through Young Community Developers. He said he is proud of all the certifications he has earned—for working in confined spaces, OSHA certifications, Hazmat training— “I’ve done all the trainings,” he said. Payne, who lives near the SE facility, worked at Chase Center for two years.

Payne, who previously worked for a non-profit helping homeless people, said joining the Laborers’ union and getting employment on the Joint Venture project “changed my life — not just in terms of earning good money but the pride I feel in the work I do. Working on a big project like this is challenging. My son sees I work hard, my friends and family are happy for me; there are lots of positive things happening now.”

Payne credits Thomas for the ongoing support and guidance as he moves up in his construction career. “BT is like Steve Kerr,” he said—a player’s coach who knows how to maximize a team member’s potential. “I was in the D-League but now I’m in the NBA,” Payne said. He said he has learned that it is important to “show up early, 45 minutes before work starts. Prepare yourself for how you will be talked to, be ready to take orders and do the work.” He said he is happy to be earning a good union wage, and putting in the time to get to the next raise.

Contractors and the SFPUC also work to retain good employees. Kral said the CMCG system enables contractors to oversee the project and work closely with the owner (SFPUC) on a day-to-day basis. “It is a benefit,” Kral said. “We have been successful getting local hires and are continuing outreach to the community to bring in more local workers—meeting with LBEs [local business enterprises], speaking at CBOs.” Kral said he has made a commitment to do outreach two days a week. “We also volunteer our time” to help support the local workforce, he said. “It is one of our core values — investing in people.”