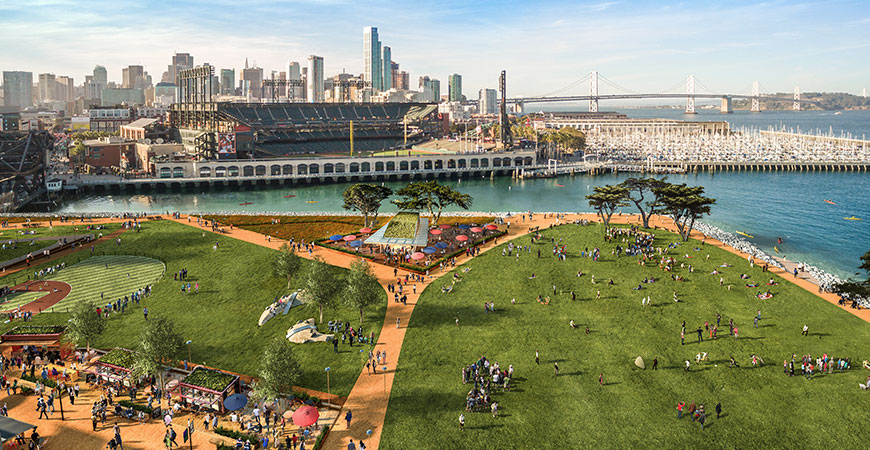 Project Labor Agreement in the Works

The San Francisco Giants are moving closer to starting construction on the massive Mission Rock project south of their ballpark on the Port of San Francisco’s Seawall Lot 337. The Port chose the Giants as the master developer of the 28-acre site in 2010.

Mission Rock will include 1,500 rental units — with 40 percent offered at below market rate, up to 1.4 million square feet of office space, and 250,000 square feet for retail and local manufacturing. The retail plan calls for small retailers, rather than large chains. The team pledged to offer below-market rents for nonprofit and arts organizations, and dedicated space for small local manufacturing businesses along a stretch of waterfront dubbed “Maker’s Row.”

The Giants also propose to renovate Pier 48, where Anchor Brewing — San Francisco’s oldest and largest manufacturing business, with a recently unionized workforce — would expand its operations. A public boardwalk will be opened around the historic pier. Mission Rock will also feature eight acres of open space and parks, a waterfront promenade, and a green space where large festivals and public events could be held, in addition to a “green town square” surrounded by housing, shops, cafes and other commercial spaces.

The development is expected to create 13,500 new construction jobs over six years and as many as 11,000 permanent jobs. The San Francisco Building and Construction Trades Council has been negotiating with the Giants for a Project Labor Agreement for Mission Rock over the past several years. SFBCTC Secretary-Treasurer Tim Paulson said the deal was being finalized as Organized Labor went to press, while the developer and the SFBCTC work out details about tenant improvement work and procedures to resolve disputes. “The Giants have given us a lot of work over the years,” Paulson said. “The PLA will ensure that our members are employed and earn good union wages and benefits. The project will create opportunities for local workers and career pathways for union apprentices.” 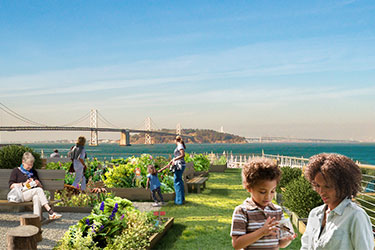 The Mission Rock development is expected to create 13,500 new construction jobs over six years and as many as 11,000 permanent jobs.

The Giants real estate division recently formed a joint venture, Mission Rock Partners, with developer Tishman Speyer and the Port of San Francisco, to build the project in four phases over six years. Union contractors Hathaway Dinwiddie and Nibbi Brothers have been involved in the pre-construction planning. Tishman Speyer has consistently used union contractors on its projects in San Francisco.

In a statement, the Giants noted that, “Mission Rock generates significant benefits for our City. Forty percent of the 1,500 homes will be affordable for low to middle income families — the most of any private development in San Francisco history. It also generates more than $1 billion in much-needed revenue for San Francisco to fund parks and essential city services such as schools, police, health care and transit. The project pays over $100 million in development fees and over $25 million each year in taxes. Mission Rock creates a full eight acres of dramatic public parks and open space, including a major waterfront park, urban town square and almost a half-mile of waterfront pathways with spectacular views. A sure hit for Giants’ fans and neighbors alike.”

The Mission Rock plan took shape over many years through a community planning process, and has been modified from the original version proposed in 2008 and a plan announced in early 2013. In 2015, voters approved a ballot measure that allows increased heights of up to 240 feet for buildings on the site. The San Francisco Planning Commission approved the project unanimously in 2017.

The latest plans for the first phase of the development include building 560 residential units in two 23-story, 240-foot towers, as well as 550,000 square feet of office space in two new eight-story and 13-story office buildings. The residential and office buildings will include new ground floor retail and restaurant spaces. The team’s Parking Lot A will remain open and parking will also be available on Pier 48 during Phase I.

Once approved by the Port Commission, which was set to take up the plan on August 13 as Organized Labor went to press, the Giants will begin infrastructure work, including elevating the site 4-1/2 feet to accommodate sea level rise. Construction would begin by May 2020 and is planned to be completed by 2023. The residential and office project portions are targeting LEED Gold standards through the use of energy-efficient systems and sustainable building practices.

The Giants’ director of government relations, Roscoe Mapps, expressed confidence that the plan would be approved, telling the Mission Bay Citizen Advisory Committee in July, “We will break ground on Mission Rock toward the end of the year.”