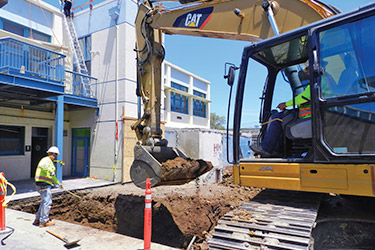 Union contractor Zolman Construction is the General Contractor for the $13 million project that will modernize Harvey Milk Elementary School. - Photo by Paul Burton

Work is covered by a Project Labor Agreement between the Building Trades and San Francisco Unified School District that guarantees prevailing wages and union benefits. Many of the projects are being built by all-union crews. SFUSD Director of Construction for the bond program, Maureen Shelton, said the PLA has worked well and projects have been completed on schedule. Contractors have been able to meet the challenges of working intensively during the summer as well as around the school day schedule during the school year, while working towards local hire goals for construction crews.

The main scope of the project in the Outer Richmond school is seismic strengthening of the classroom building, including the installation of sheer walls, collector beams and piles.

Union contractor Arntz is the General Contractor for the $34.5 million project, which began in June, with AECOM serving as the Construction Management contractor. Between 40 and 50 construction workers were on the jobs in early July. The project will employ several hundred union building trades workers over the scope of the project, which will be done in eight phases over the next two years. During the school year, students will be relocated to 12 temporary bungalows.

Major subcontractors on the all-union project include Grand Electric, Bay City Fire Protection, Superior Gunite, Gamma Rebar, Sacramento Drilling, Bell Products for plumbing, Harrison Drywall and West Tech Roofing. Most of the subcontractors have worked on other SFUSD projects over the past several years. Sterling Environmental is doing abatement work, with a crew of 20 laborers removing lead paint as part of the project’s first phase.

AECOM’s Project Manager, Lynda Wilson, said there were no major challenges on the project, though crews encountered a number of old pipes along the east side of the school that had to be removed to make way for conduits for temporary electrical power. Wilson said the school buildings would also get a new roof and new seismically upgraded roof beams, and be more energy-efficient, with new LED lighting, low flow toilets and other improvements.

Union contractor Zolman Construction is the General Contractor for the $13 million project that will modernize the small three-story elementary school in the Castro and add a new multi-use building. Vanir is the construction management firm for the project. Major subcontractors on the all-union project include Harrison Drywall, Dinelli Plumbing, J.J. Albanese for concrete and rebar, Mike Brown Electric, Foothill Mechanical for HVAC work, AAC Glass for new windows and TLK Steel. Between 20 and 25 construction workers are employed at the project this summer. Over 200 will be employed over the scope of the project.

The general modernization of the existing classroom building includes lead and asbestos abatement that will continue through the fall of 2020, new plumbing, electrical and HVAC systems; new windows, ceilings and floors; and new interior classroom upgrades. SFUSD’s Senior Project Manager Andrea Dawson said improvements for disability access to comply with the Americans with Disabilities Act were done in 2005.

Dawson said the new building addition will be cantilevered and connected to the existing building. It will include a second-floor media center and room for the main office. The entrance to the school will change and be improved to be more accessible for the community.

Future projects funded by the 2016 bond measure (Prop A) will include completing seismic safety and modernization projects to make all schools and other district facilities more earthquake safe and energy efficient; building new schools and classrooms to accommodate a growing student population, and maintaining and expanding the district’s Green Schoolyards Program to 91 school sites. Prop A will also help fund technology improvements such as higher-speed Wi-Fi for all classrooms, and development of a new SFUSD Arts Center and Ruth Asawa School of the Arts to preserve and promote music and arts curriculum. Other projects in progress or seeking bids this year and next include the $18.5 million general modernization of Lafayette Elementary School in the Outer Richmond and Dr. Charles Drew Elementary School. Several smaller projects focused on energy efficiency funded by the 2012 statewide measure Prop 39 are also underway.