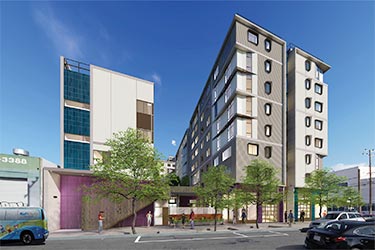 The new affordable housing development at 1990 Folsom in the Mission will feature 143 apartments in a nine-story building.

Mission Economic Development Agency (MEDA) and Tenderloin Neighborhood Development Corporation (TNDC) held a groundbreaking event May 10 for their new affordable housing development at 1990 Folsom in the Mission. All of the 143 apartments in the nine-story building, “Casa Adelante - 1990 Folsom,” will be permanently affordable for low-income families, with 25 percent set aside for families choosing to relocate from HOPE SF sites. Over one-half of the units will be two and three-bedroom apartments for families.

Nibbi Brothers is the general contractor for the project. Nibbi’s project manager, Phillip Rayman, said the project will be built using all union labor. Major subcontractors include O’Brien Mechanical, Value Fire Protection for fire sprinklers, Broadway Mechanical and McKee Electric. Demolition and excavation of the site, which had been vacant and underutilized, began in March. A small crew of Laborers, Operating Engineers, and Carpenters is now employed at the site; the building will rise to the podium level in October.

“When voters passed the Affordable Housing Bond in 2015, this was the exact type of project we were looking to create for our low-income families,” said Mayor London Breed. “We desperately need more affordable housing, and the $500 million Affordable Housing Bond I introduced this week will allow us to begin construction on new projects for low-income residents that are ready to be built today, continue rebuilding our public housing throughout the City, and keep current tenants housed.” (In late May, Mayor Breed and Supervisor Norman Yee proposed increasing the amount of the housing bond measure to appear on the November 2019 ballot to $600 million.)

Located on the site of a former bakery, Casa Adelante - 1990 Folsom “respects the history of the site and brings new life to an industrial area of the neighborhood,” according to the developers. The ground floor will feature Mission-based arts and cultural organizations Galería de la Raza and HOMEY, plus a licensed child care center operated by the Felton Institute, as well as some retail space.

“This exciting project marks our fifth affordable housing groundbreaking in my district this year,” said District 9 Supervisor Hillary Ronen. “1990 Folsom is not only providing affordable housing, it also includes a space for essential needs of this community — affordable childcare, grassroots youth leadership through HOMEY, and a permanent space for Galeria de la Raza, a cultural anchor of the Mission. I am committed to keeping the pressure on so we can celebrate many more groundbreakings like this one.”

San Francisco-based architects Leddy Maytum Stacy Architects (LMS Architects) designed the 155,000 square foot project that is targeting LEED Gold status using energy-efficient systems and building practices. A description by Nibbi Brothers notes that, “Above the main 16th Street entry is a two-story portal, framed by a colorful mural, that offers a glimpse into the planted podium level and heart of residential life. The podium level is visually connected with an inner courtyard to the ground floor and childcare activities below as well as a 7th story and roof space above, dedicated to urban agriculture and food production for residents. Concrete frames subdivide the remainder of the façade, which is further modulated to respond to a residential scale and offer a sense of belonging and home. The project features a rooftop photovoltaic array and solar hot water array, targeting a Green-Points Platinum rating. Given that it serves vulnerable populations and is located in an area prone to flooding, it incorporates many hazard mitigation strategies to ensure a resilient future.”

MEDA Director of Community Real Estate Karoleen Feng said, “Casa Adelante – 1990 Folsom is the third to close of the five affordable housing developments in our organization’s pipeline. We are upending the narrative in the Mission — as there are solutions and options for affordable housing.”

TNDC Chief Executive Officer Don Falk said, “TNDC was founded in 1981 with the goal of protecting the Tenderloin from the seemingly inevitable gentrification and displacement that threaten the neighborhood. Today, we are proud to work with partners in other San Francisco communities, like MEDA in the Mission, to reduce the rate of displacement of people with low incomes and people of color.”

“As cultural bearers it is our duty to protect our traditions, rituals, sites, and to honor the social fabric and people that have contributed to the art and social movements of the Mission District. The Casa Adelante - 1990 Folsom project is located within a blueprint of growth. It is a unique opportunity, where joint investment between City, community developers and ground-floor users can successfully realize this one-of-a-kind historic place-keeping venture. For Galería it is a ‘renacimiento’ that offers us a permanent home where we will have the ability to build and sustain our assets for generations to come,” said Galería de la Raza Executive Director Ani Rivera.

“1990 Folsom will not only provide affordable housing to 143 families in our community, but it will also house Mission-rooted organizations like HOMEY, which have struggled to find permanent space for almost 20 years,” said HOMEY’s Executive Director Roberto Eligio Alfaro.

The project will take approximately 22 months to complete, and employ many union construction workers. Developers expect tenants to move in to Casa Adelante – 1990 Folsom in early 2021.