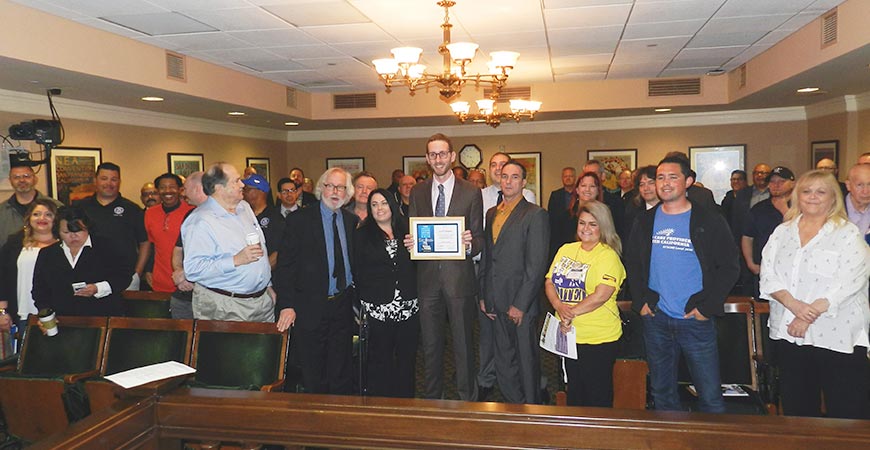 “We appreciate our representatives in Sacramento who have worked with us at the local level and continue to support our agenda that protects workers’ rights, expands prevailing wage requirements, and creates good union jobs,” said San Francisco Building and Construction Trades Council Secretary Treasurer Tim Paulson. “Legislation we support this year builds on the gains we have made in recent years and addresses crucial issues like worker health and safety and supporting policies that ensure we will have a well-trained, skilled workforce in the future.”

The meetings were part of the Joint Legislative Conference sponsored by the State Building Trades Council (SBCTC) and the California Labor Federation. The Bay Area legislators expressed support for Labor’s 2019 legislative package. Many had voted overwhelmingly in favor of labor’s bills in the 2018 legislative session, with Wiener, Chiu, Mullin and Ting having earned 100 percent pro-labor voting records.

Labor is backing bills that would protect workers from misclassification as independent contractors, restoring labor rights, strengthening worker power and ensuring access to justice for working people. Building Trades bills focus on protecting and expanding prevailing wage requirements, confronting harassment in the construction industry, and protecting worker health and safety on the job. Other issues discussed included containing health care costs, dealing with the housing crisis and supporting the efforts of child care workers to unionize.

Senator Scott Wiener touted his Transit Zoning Bill (SB 50) that creates density and height zoning minimums in transit-rich areas that can accommodate more housing. The bill has been endorsed by the SBCTC. Senator Wiener said he supports prevailing wage requirements and project labor agreements and the SBCTC’s efforts to set a residential construction wage. He said he supports an “all of the above” approach to dealing with the housing crisis, including more tenant protections, funding affordable housing development and building more housing. He said Governor Newsom is proposing bringing back some form of the state’s defunct Redevelopment Agency to help fund affordable housing.

A California Labor Federation statement on housing and jobs notes that many working families struggle with skyrocketing housing prices and rent while wages remain stagnant or decline. The Labor Federation calls for the State to invest in housing and create good-paying union jobs and apprenticeship opportunities for communities across the state, prioritize affordable housing, transit-oriented development, and enact tenant protections to prevent displacement.

IBEW Local 6 member Ron Lewis asked the legislators to support investing in housing and creating good union jobs, and to stand with labor to support prevailing wages, use of skilled labor, and access to career opportunities for disadvantaged communities. Assemblymember David Chiu said, “That is my agenda. Labor and the Building Trades have been responsible for the gains we have made. We need to put your folks to work, pay prevailing wages and support apprenticeship programs.” Mullin said he supports the same agenda. Berman said, “We are going to push for change to build more housing and make sure it is built with prevailing wages and local labor.”

Chiu said bringing back some form of redevelopment would help fund affordable housing and address “the missing middle”— workers who do not qualify for subsidized housing but also can’t afford to buy a home. He said he had moved a package of bills to protect tenants that the Governor will support, and asked labor to support. He noted that most workers are renters, and without tenant protections would be forced to commute longer distances to jobs in the expensive Bay Area. Chiu noted that his proposal to build more housing on BART parking lots met resistance. Assemblymember Kevin Mullin praised Chiu as a “thought leader” on housing issues as Chair of the Assembly Housing Committee. Mullin said housing would be a big issue this year. Noting that Governor Brown signed a package of 15 housing bills in the previous session, Mullin said, “Governor Newsom is elevating housing to a top level issue — to address funding for affordable housing.” Mullin said adjusting CEQA (the California Environmental Quality Act) is also necessary. “The building trades need to be at the table if we do,” he said.

Assemblymember Phil Ting said, “My priorities are your priorities. We are with you in this fight in California.” Ting said he doesn’t state a position on bills before they have gone through committees and reached their final version, but he supports Labor’s bills in concept.

A priority for Labor this year is passing Assembly Bill 5, which would codify the California Supreme Court ruling in the Dynamex case dealing with misclassification of employees as independent contractors. Misclassification of workers has been a driver of income inequality, declining union density, and diminishing worker power. Millions of workers misclassified as contractors could have employment status restored by this court decision. The Dynamex decision relies on three part test to determine if a worker is an employee: workers are employees if a company controls what they do, if their work is central to the company’s business, and if they do not operate their own independent businesses doing that work. Senator Wiener said he supports the Dynamex standard, but there is still work to be done on the bill to address specific issues and industries where classification as an independent contractor may be appropriate. While truck drivers and TNC drivers with Uber and Lyft should be classified as employees and be eligible for benefits as employees, real estate agents and hair stylists could still be independent contractors.

Assemblymember Ting said he absolutely supports dealing with misclassification as well as getting more clarity about which industries might be exempted as the bill goes through the process and is revised. Chiu said, “The Dynamex standard needs to be applied to millions of more workers” and that legislators are working with labor and business groups to determine who is covered by the ruling. Assemblymember Mullin said by the time the bill comes to a vote it will have been changed, and he likely would support it. Assemblymember Berman said he was not ready to say he would support AB 5 as it goes through the process, but supports addressing the issue. “We want to allow flexibility for people who want to be independent contractors while dealing with companies that misclassify workers,” he said.

Gideon Baum, Policy Director of the Senate Committee on Labor and Industrial Relations, spoke with the union delegation as State Senator Jerry Hill, who chairs the committee, was in a hearing. Baum said regarding AB5, “We have to lift standards for everyone, not have a race to the bottom.” He noted that the “gig economy” is a small part of the misclassification issue, which extends to warehouse workers misclassified by Wal-Mart as contractors. “Struggle to make sure you have justice in the workplace,” he said. “There is a lot to do but the decision ends a bad standard.”

Assembly Committee on Labor and Employment Chair Ash Kalra said the Bay Area is at the epicenter of the “gig economy” and Dynamex, and is facing pressure from the tech industry. “It’s important to set expectations of what a worker is,” Kalra said. “It’s a struggle dealing with misclassification, which costs the state $7 billion annually [in lost tax revenue]. Good employers are punished for doing the right thing. Workers suffer in the most expensive area to live — where ‘one job should be enough’ should be the rallying cry.” Kalra authored many of the bills supported by Labor this year.

California Labor Federation Legislative Director Caitlin Vega told the San Francisco Chronicle “I think it’s a turning point in our economy, a chance to say, we can build a future of work and use technology and be innovative, but still maintain basic protections. Dynamex concluded that labor laws are not so easily circumvented.” The Chronicle noted that, “While Dynamex applied only to wages, AB5 takes a more sweeping approach, including the full spectrum of employee benefits, including paid time off, unemployment and workers’ compensation.”

Sprinklerfitters Local 483 Business Agent Tony Rodriguez asked the legislators to make sure Accessory Dwelling Units (ADUs) are not exempted from requirements for sprinkler systems. Senator Wiener said it is a tough issue and requiring sprinklers in single unit dwellings like in-law units could be too costly and limit construction. Assemblymember Chiu said, “We voted to put fire sprinklers in mobile homes. We need to protect people and fire fighters.”

Assemblymember Berman, who represents the southern part of San Mateo County and northern part of Santa Clara County, said he is working to make sure Californians participate in the 2020 U. S. Census. California receives $78 billion in federal funds annually, Berman said, and an accurate count would ensure that California continues to get funding for important programs as well as the right number of representatives in Congress.

Other bills on the State Building Trades Council 2019 Legislative Agenda include:

Definition of “De-Minimis” Public Funds for Private Projects - AB 520 (Kalra)
Closes a loophole that allows developers to bypass the prevailing wage because of the Department of Industrial Relations’ interpretation of what constitutes a “de-minimis” public subsidy.

Protecting Outdoor Workers from Wildfire Smoke - AB 1124 (Maienschein)
Directs Cal-OSHA to develop a standard to clarify the obligation of employers to protect outdoor workers from toxins due to wildfires.

Confronting Harassment in the Construction Industry - SB 530 (Galgiani)
Establishes an advisory committee consisting of representatives of Building Trades unions, contractors, state agency representatives and others to develop an industry specific harassment and discrimination prevention policy and training standard for use by construction employers. The advisory committee would provide recommendations to the Legislature for implementation.

Cracking Down on Unlicensed Land Surveying Work – SB 556 (Pan)
Modernizes and brings clarity to the Professional Land Surveyors Act by making it clear to contractors and developers when a licensed professional land surveyor is required.

Limit Deposition for Asbestos and Silica Cases - SB 645 (Monning)
Protects individuals deemed by a physician to have “substantial medical doubt of their survival beyond six months” (due to mesothelioma or silicosis) from prolonged civil discovery sessions by limiting depositions to seven hours.