Last Skyscraper Site in Transbay Up for Development 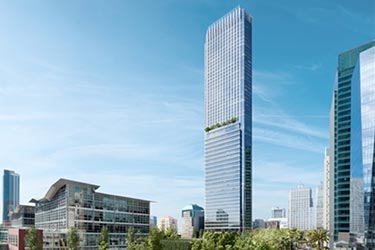 Developers Hines and Urban Pacific Development recently revised their proposal for a high-rise project in the Transbay district. The developers have been working with the San Francisco Planning Department over the last year on the project for Transbay Parcel F at 542-550 Howard Street, which they purchased from the Transbay Joint Powers Authority for $160 million in 2016. The latest proposal reduces the number of housing units and office space.

If approved, the Parcel F development would feature a 62-story, 750-foot-tall mixed-use high-rise tower with 165 condominiums. Previous plans called for 170 housing units and a 210-room hotel. The newest plan would include 189 hotel rooms, 9,900 square feet of retail space, 59,800 square feet of hotel amenities and 274,000 square feet of office space (down from the earlier proposal’s 288,677 square feet). The project would also include five below-grade levels of approximately 74,600 square feet, 197 bicycle parking spaces and 22,400 square feet of open space.

The tower at Parcel F is designed by Pelli Clarke Pelli Architects — the same firm that designed the Transbay Terminal and the Salesforce Tower — in partnership with the local office of HKS Architects. It would become the fifth tallest building in San Francisco following the Salesforce Tower at 1,073 feet tall, the 910 feet tall Oceanwide Center currently under construction, the Transamerica Pyramid at 853 feet tall and 181 Fremont at 802 feet. Parcel F is the last major skyscraper site in the Transbay district.

Chris Collins of Urban Pacific said the developers are getting closer to submitting plans to the Planning Commission. Meanwhile, Collins said, Salesforce has signed a lease for the entire office component in the tower. The cloud computing company is already San Francisco’s largest private employer with 8,500 workers spread out among five Transbay area buildings with 2.5 million square feet of office space; the Parcel F office space will allow the company to add another 1,500 workers in San Francisco.

“We are also in discussions with a hotel partner, who will be announced soon in 2019,” Collins said. “We are working with Planning and Building Department with a goal of breaking ground in 2020. Construction is anticipated to take approximately three and a half to four years.”

Hundreds of construction workers will be employed on the project, as well as for Urban Pacific and Hines’s project for Transbay Block 4 on Howard Street between Beale and Main Streets, next to the Transbay Park atop the terminal. Current plans for Block 4 call for a residential tower with 500 residential units, with 45 percent of the units on site available at below market rate. The ground level will include 16,000 square feet of retail space. The developers are targeting U. S. Green Building Council Leadership in Energy and Environmental Design (LEED) or GreenPoint Rated certification through sustainable building practices and energy efficient systems. Collins said plans for Block 4 could be finalized six to nine months after Parcel F and be ready to go through the City’s approval process. Construction of Block 4 will be complete in three years, he said.

The Block 4 and Parcel F sites are among 11 sites the City of San Francisco and the Transbay Joint Powers Authority set aside for private developers. Overall, the City’s master plan for the 40-acre Transbay District will add more than 6 million square feet of commercial space and 4,400 homes in the South of Market (SoMa) area, anchored by the bus and train terminal.