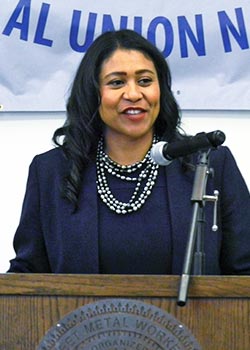 Delegates to the San Francisco Building and Construction Trades Council unanimously endorsed Mayor London Breed for her re-election this November for San Francisco mayor. Ms. Breed was elected Mayor last June in a special election to serve until 2020, filling the remainder of the term of the late Mayor Ed Lee.

“In her first few months in office she was accessible, strong and committed to engaging labor issues,” said Secretary-Treasurer Tim Paulson. “And it should be noted that a major legislative priority in San Francisco — guaranteeing that workers on all City projects will be protected by the terms of union labor contracts — was signed during the early part of her administration.”

Mayor Breed signed legislation January 18 mandating the City to enter into a Citywide Project Labor Agreement with the San Francisco Building Trades Council for Public Works or improvement projects. She co-sponsored the citywide PLA legislation as a member of the Board of Supervisors, and said she would make it a priority if elected Mayor.

“San Francisco building and construction trades workers are proud to endorse Mayor Breed for re-election,” said Larry Mazzola, Jr, President of the Building Trades Council. “She has fulfilled her promises to us by supporting rights for all workers and steering the historic Project Labor Agreement which will guarantee the highest standards of wages, benefits and training for all San Francisco workers whether union or non-union. She deserves our support.”

In her recent State of the City address, Mayor Breed announced plans for a charter amendment for the November 2019 ballot to expedite the approval of 100 percent affordable and teacher housing that comply with existing zoning laws. “We have to break the barriers to building housing so our dollars go farther and we get housing built faster,” she said. “No more bureaucracy. No more costly appeals. No more ‘not in my neighborhood.’ It is simple: affordable housing as-of-right because housing affordability is a right.”

Earlier in January, Mayor Breed proposed that a $300 million municipal bond to fund affordable housing development for the 2020 ballot. “We need to build more housing in San Francisco, especially badly needed affordable housing to help keep our communities stable,” she said. Breed also supports a $600 million bond measure for seismic safety upgrades that will be on the November 5, 2019 ballot. She said the earthquake safety and affordable housing bonds are “both key priorities” and proposed that they be part of the City’s 10-year Capital Plan that recommends $35 billion in infrastructure investments over the next decade to make seismic upgrades and improve utility and transportation infrastructure.

Breed also followed through on her pledge to deal with the crisis of homelessness in the city. She called for “immediate action to address the public emergency and help our unsheltered residents we see every day on our streets” and introduced legislation to “declare a shelter crisis in San Francisco, which would allow the City to take more immediate action to help people off of the streets and into care and shelter.”

Mayor Breed’s record on the Board of Supervisors includes legislation to increase housing along transit corridors, advocating for more navigation centers for the homeless, opening new units of permanent affordable housing for formerly homeless veterans at the Auburn Hotel, and working to pass the $310 million housing bond in 2015 to fund the construction, purchase and preservation of affordable housing.

The 2019 San Francisco mayoral election will take place November 5. Mayor London Breed will be running for her first full term in office.