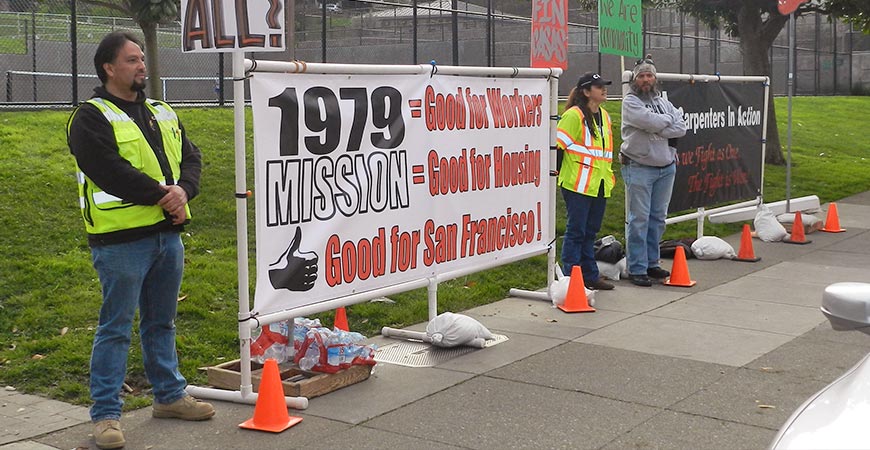 Supporters of the proposed development at 1979 Mission before a San Francisco Planning Commission informational hearing. - Photo by Paul Burton

Affordable Housing at Center of Debate of Big Job Creator

The San Francisco Planning Commission held an informational hearing on the status of developer Maximus Real Estate Partner’s proposal for housing at the 16th Street BART Plaza at Mission and 16th Streets at its February 7 meeting. Supporters and opponents of the project filled the auditorium of Mission High School a few blocks from the project site. San Francisco Building and Construction Trades Council Secretary-Treasurer Tim Paulson said he has been a resident of the Mission for 35 years. “We have a serious affordable housing crisis and need developers who treat workers right,” he said.

The project has been in the works for about six years; the developer put forward plans last year for a 10-story, 331-unit, 388,912 square foot mixed-use building with 46 below-market-rate townhomes on the Capp Street portion of the property above the BART station. The proposal met with strong opposition from Mission residents and activists who dubbed the project “the Monster on Mission” and called for a project with 100 percent affordable housing instead.

At the hearing, Maximus representatives presented their newest updated project, while representatives from the Plaza 16 Coalition expressed their continued opposition and presented a rough outline for a competing plan with 100 percent of the units affordable.

“We heard the concerns of the community and have put forward a proposal that moves toward addressing their concerns, and will be a benefit for the community,” said Maximus Project Manager Regolia Foronda.

Maximus’s latest proposal calls for changes to the three buildings that would make up the project, which would still include 331 rental units, but all rented at market rate. Maximus proposes to build an additional 192 units that would all be affordable housing at two nearby sites already entitled for housing — 2675 Folsom, where Axis Development had planned a 117-unit project, and 2918 Mission Street, entitled for 75 apartments — which would have had only 31 affordable units. Maximus is working on a plan to purchase the properties, and would turn over the parcels to the City for affordable housing in exchange for approval of its 16th Street project. Developers are required when their project does not include 15 percent affordable housing on site to fund affordable housing at another site.

Foronda said the developer had addressed concerns about shadows cast on nearby Marshall Elementary School by stepping back the building from the street. The project would also offer community benefits, including 32,500 square feet of retail space, a Mercado for local vendors to be operated by a local non-profit and offered for free or at very low rent, a gallery for local artists to display and sell their work, and a pharmacy. “It will be built with 100 percent union labor and opportunities for local hires,” Foronda said.

The Plaza 16 Coalition activists called for “working-class Mission residents most impacted by displacement, rising rents and loss of community” to have the right to lead development decisions. They offered their preliminary plan for a project with 100 percent affordable housing as an example of a community controlled planning process for the Mission, but did not present details about the number of housing units that would be built. The coalition has lined up the support of several local organizations, as well as non-profit developer Mission Housing. They propose to fund their project using public funds from an affordable housing bond or other City sources. The alternative proposal would also be built with 100 percent union labor and with local hiring.

Opponents and supporters of the Maximus plan lined up to speak for one minute each during the public comment portion of the meeting after the two presentations. Several building trades union members spoke in support of the Maximus proposal.

Sprinklerfitters Local 483 business representative Tony Rodriguez said there is no housing at the site now and that the project would not displace anyone. He said in the years the project has been delayed the city’s housing shortage has gotten worse. “We need more housing, so build it,” Rodriguez said.

Maximus was expected to submit their latest proposal to the Planning Commission after the community meeting. The San Francisco Chronicle reported that, “If the city turns down the offer, Maximus said it would put the matter on the ballot and have voters decide.”